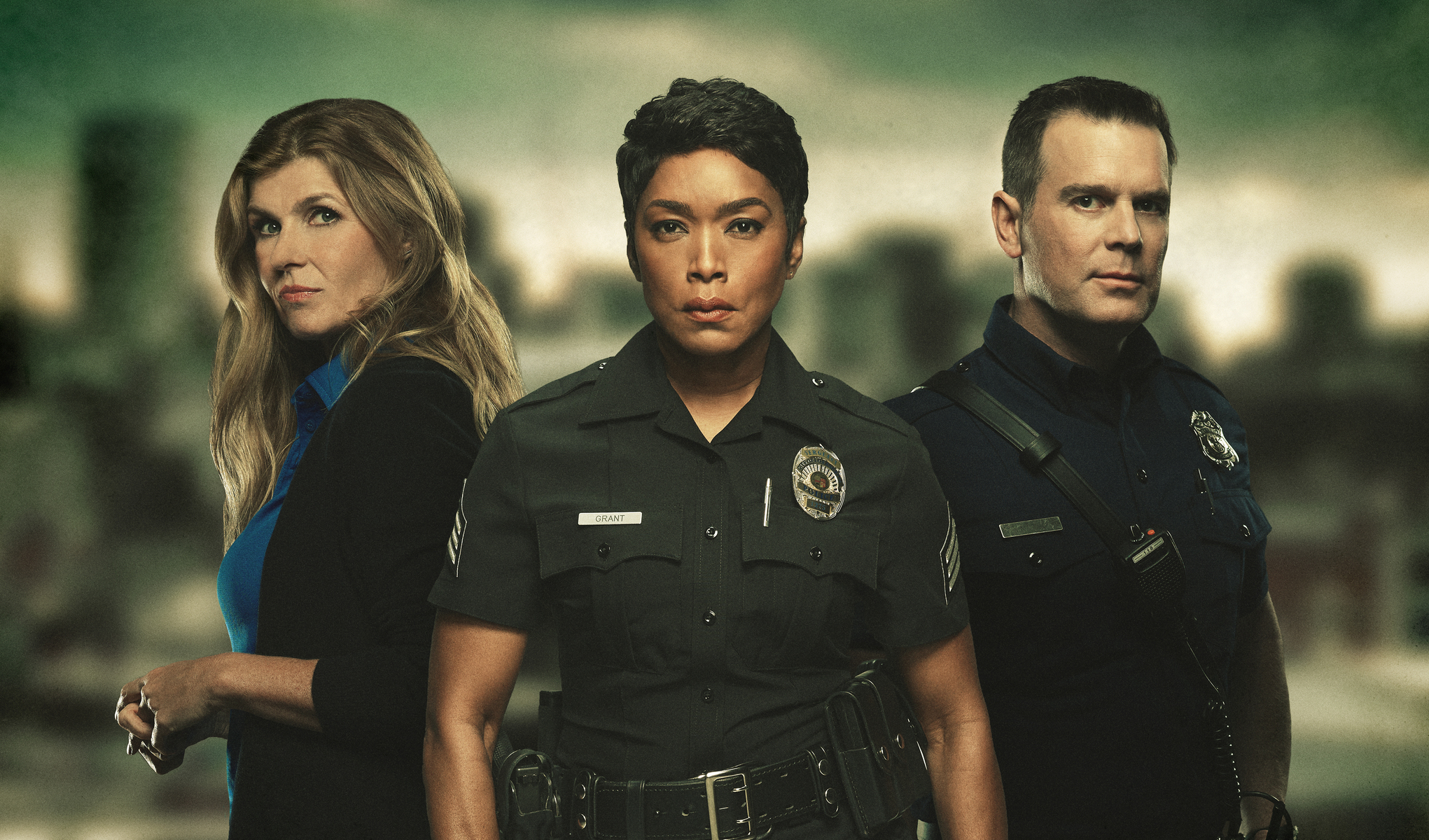 With 9-1-1, Ryan Murphy and Brad Falchuk deliver a strong pilot episode that accomplishes the rare feat of being exciting, while at the same time effortlessly setting up the world in which 9-1-1 takes place.  The series is set in Los Angeles, and takes a hard look at the world of first responders, showcasing the person taking the 9-1-1 call, the Fire Department, the Police, and the EMT’s.  Their jobs are to be there for their fellow citizens no matter how brutal, ugly, or bizarre each of the situations they’re called into appear.  These are problem solvers who must act quickly to keep situations from turning from bad to worse.  What are their lives like?  These people who have to be nearly perfect at their job, have less than perfect lives outside of work.  9-1-1 looks at how each of these characters balances their personal problems with their professional lives. 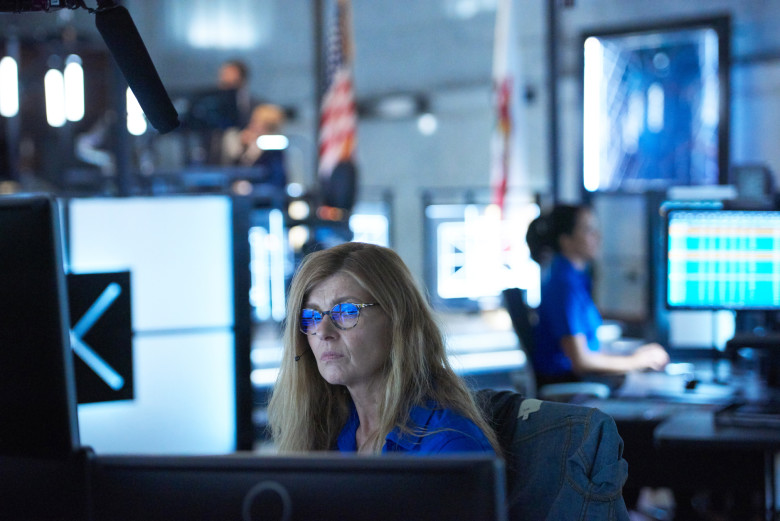 The three main characters of the show (Angela Bassett’s policewoman Athena Grant, Connie Britton’s 9-1-1 dispatcher Abby Clark, and Peter Krause’s fireman Bobby Nash) all have a depth to them you don’t see this early in other series.  Each one of them is damaged in some way that isn’t clear if you only saw them in their professional roles.  Angela Bassett deals with the break up of her family, and the feeling of betrayal she holds against her husband (Rockmund Dunbar), who we only see briefly in a powerful scene.  Connie Britton is a forty-two year old who’s just broken up with her boyfriend, has a mother she cares for falling into the fog of Alzheimer’s, and a high stress job where she has to talk people calmly through life threatening situations.  Peter Krause spent the last ten years of his life in an alcohol and drug fueled cloud, but has been through rehab, is sober, and has been back on the job for eighteen months.  He must master his own demons while helping his confident, young, wreckless co-worker Buck (Oliver Stark) from succumbing to his.  The confidence all three exude while at work hides the fact they’re all struggling for meaning, direction, and stability. 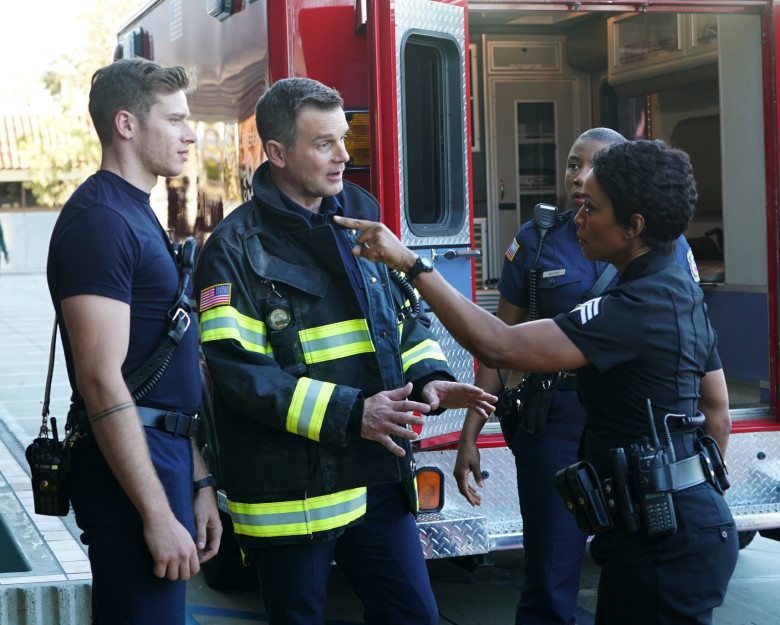 These character’s lives cross in the line of duty, but they’re merely passersby in the drama of the job, never stopping long enough to really get to know each other.  If you imagined a Venn diagram, their three lives would meet in the middle, but this intersection would only represent a fraction of each of their lives.  The larger part outside of this intersection encompasses destructive behaviors, disappointments, losses, and pieces of lives gone in unexpected directions, and the attempt to deal with and make sense of it all.  The beauty of 9-1-1 is that even the secondary characters are fully formed and interesting.  There are no cookie cutter, convenient characters placed only for the benefit of moving the plot forward.  Each character is constructed with intention and design, nothing is wasted or neglected in this hour of television.

It would be easy for a show like 9-1-1 to rely too much on showcasing the most insane calls, and don’t get me wrong, they deal with some crazy situations, but these are not played for shock value like one might expect.  These bizarre situations are tests for the characters, almost more like blips in their lives.  They move from call to call, needing to put the last one behind them in order to do their job properly the next time they’re needed.  Not every call is a success, because this would be unrealistic.  Looking into how these characters deal with the people they can’t help, or they lose, is just as important as the heroics they display when they’re successful.  Peter Krause’s character Bobby has extra importance placed on how he deals with tragedies he can’t reverse, since his old way of dealing with it through drinking nearly destroyed his life once before.  Bobby is on a path of accountability, focusing his attention not only on saving as many people as possible, but also saving his own life. 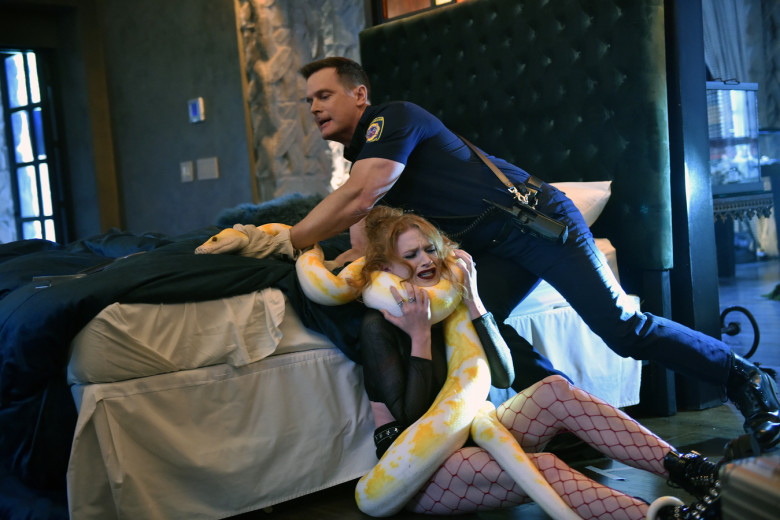 Ryan Murphy and Brad Falchuk have outdone themselves and written a television pilot with depth and intrigue.  It left me wishing there were more episodes to preview.  FOX only sent out the pilot as a screener, but it appears to be a move based more on holding all of their cards to their chest, rather than keeping a flawed piece of television out of the critic’s eyes.  I’ll be honest; I’ve not really been a huge fan of the Murphy/Falchuk brand.  I find that their overreliance on campiness tends to suck all of the drama out of their shows, but 9-1-1 is something entirely different.  The formula on display here wouldn’t work with camp.  The intensity of the pilot, coupled with the depth of the characters pulled me in hard, and won me over.  Ryan Murphy and Brad Falchuk wrote the pilot, but the show will be passed on to the experienced and capable showrunner Tim Minear.  It’ll be interesting to see where he takes 9-1-1 in the future.