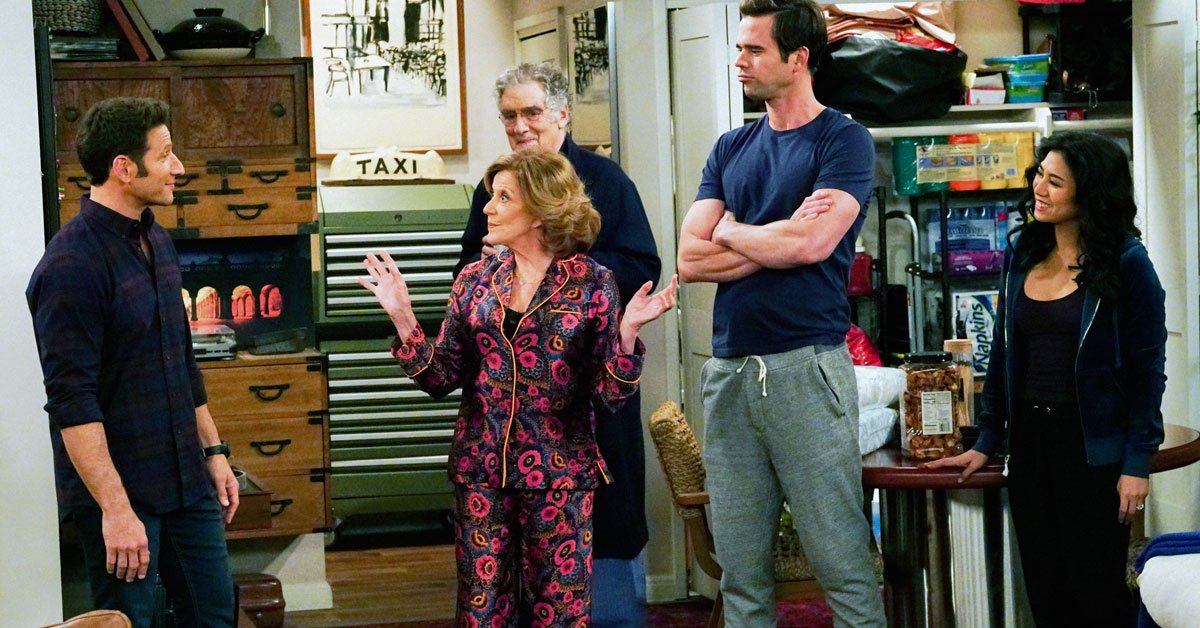 Well, it’s back. Woo-hoo. The CBS comedy in its freshman season 9JKL returns from its winter hiatus with “Heavy Meddling,” an episode that I could have come up with if you had asked me to just combine all the story elements and tired jokes of every past episode, blend them all together, and dump them out onto some blank pages. If you couldn’t tell by the title, Judy (Linda Lavin) is once again up to some interfering in life of her son Josh (Mark Feuerstein). Once again the set-up is Josh meets a girl he likes and we wait for his family (particularly his mother) to ruin it.

When the daughter of one of Judy’s friends comes to return a book her mother had borrowed, Josh just happens to be present. Turns out that Josh and Helen are old childhood friends. They had gone to camp together, share some fond memories, and what do you know, she’s extremely beautiful! When she leaves, Josh demands to know why his mother hadn’t set him up with Helen. Judy reminds him that Josh made her promise not set him up with anyone after the last two girls were not to his liking. He renegs and practically begs her to get Helen’s number for him. She agrees. But when she steps outside to call Helen’s mom, we hear her phone call reveal that this was all part of their plan!


Meanwhile, Andrew (David Walton) and Eve (Liza Lapira) are supposed to head out for the evening and their typical babysitter, Judy, is busy. What are they to do with their infant son? Well, Andrew’s dad Harry (Elliot Gould) is free. Harry isn’t the brightest crayon in box, to put it lightly. To put it literally, the character is written like he is mentally handicapped. He is a cartoon character. Needless to say, Eve is not thrilled with the prospect of Harry looking after their child for the night. But they also don’t want to hurt his feelings and say no. What to do?

Of course Josh and Helen go on a date and hit it off. They end up on the balcony back at Josh’s place, and after discovering a common interest in Italy and its language, the two end up kissing, complete to Italian ballads blasting from Judy’s apartment. She comes out to greet the two. Afterwards, she reports to Helen’s mom, all is going according to plan. Eventually Josh figures out that the entire thing, from start to finish, was coordinated and set-up by the two of their mothers. So in an act of revenge, he tells Judy that he and Helen are getting married and moving to London next week. And it’s all because Helen came up to return a book instead of her mother!

I’ve said it before, and it’s true again here. The one tolerable character who can even get a smirk out of me is the doorman Nick (played by Matt Murray). It makes no sense why he is so caught up in these tenants’ lives, but I’m not complaining. Andrew and Eve ask him to pretend to be fixing a sink in their apartment while they are out, so that he can keep an eye on Harry keeping an eye on their baby. When they return, Nick is at the end of his rope. He had to take care of Harry more than the kid. He even swaddled him at the end of the night. Eventually, Eve and Andrew come clean to Harry about their concerns. He accepts them and says he really just wants to spend time with his grandson. So they let him chill with the baby in his room while they listen in on the baby monitor. Sure, why not.

When Judy discovers that Josh really isn’t moving to London, she decides to call his bluff and bring a man over to see his apartment. Josh is forced to admit the apartment isn’t available. No he knows that Judy knows that he knows she was behind this entire thing. In the end she agrees to stop meddling, and Josh and Helen decide that it probably wouldn’t work out anyway with both of their mothers being so intrusive. This show never quite gives us enough pay-off in the end but this episode particularly felt mailed in. Not a good sign for the second half of the season.