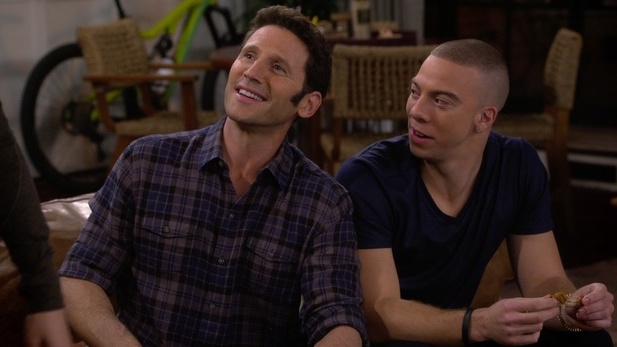 Another sub-standard episode of 9JKL brought the first half of its freshman season to a close in its mid-season finale entitled “It Happened One Night.” Although any episode is usually brought up a few points when the writers wisely choose to highlight the talented Matt Murray as the doorman Nick, it was not enough to make this show memorable. All taking place over the course of one night in the three adjacent apartments (Josh, his parents’, and Andrew and Eve’s).

We open on Harry, Judy, Josh, Andrew, and Eve toasting to Andrew and Eve’s anniversary. We learn that they no longer buy one another gifts for their anniversaries; instead they opt to purchase things for themselves they know they want, and then have the other hand it to them on their actual anniversary. We also hear that that night friends of Judy and Harry’s Dick and Lenore Stevenson are coming over to play bridge. Harry loves Dick (surprise) but Judy doesn’t care for the passive aggressive Lenore always trying to one-up her. Josh gets up to go to his new spin class, bragging to his family that it is taught by a celebrity named Sydney that is apparently pretty exclusive. The only reason he’s in it is because his friend Lucas is dating her. 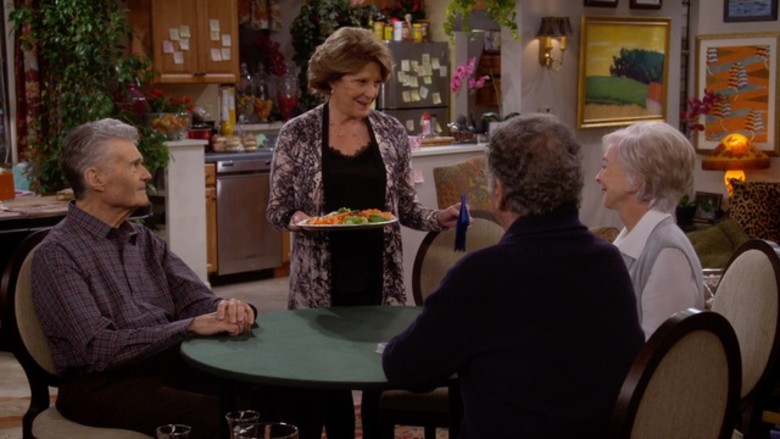 The problem is, as we soon find out, Lucas is planning on breaking up with Sydney, which surely means that both and and Josh we bill kicked out! Oh no! Lucas divulges this information to Josh while he and doorman Nick are hanging out eating wings together. The guys don’t believe that Sydney could be that bad, but when she pops in we see that she is ragging on Lucas for not taking the stairs for all nine stories, and immediately obnoxiously criticizes the guys for eating chicken wings. Yeah, she’s awful. Now Lucas needs to figure out a way to break up with her without getting he and Josh both kicked out of her exclusive spin class! The stakes have never been higher!

Some of the biggest laughs did however come from this set-up as Nick pretended to be Sydney in some test scenarios for Lucas breaking up with her. While the written jokes aren’t anything special, Matt Murray has great comedic timing and sensibilities and makes what would normally be duds at least partially smile-inducing. The episode’s other laughs came from a guest appearance from Fred Willard (always a pleasure) who played Dick Stevenson who just lavishes Harry with all the compliments while his wife Lenore and Judy have a passive aggressive war.

When Andrew and Eve exchange gifts for one another, Andrew is surprised to find that Eve got him something actually from her. Imprints of their infant son Wyatt’s hands she made in their Mommy and Me class. Andrew is touched but feels bad that he didn’t get anything personal and “awwww” inducing for Eve. He goes to help from his brother, who of course just got done helping Lucas figure out a way to dump his girlfriend without her cutting them off from the spin class (his advice–tell her the truth and make her feel like it is the best option for her to break up with him). This results in Sydney recognizing the words as not Lucas’ own and calling him on his B.S. She kicks them both out of the spin class, but ultimately Josh convinces her to let him stay by going against one of his convictions–he lies to her and tells her he is dying. 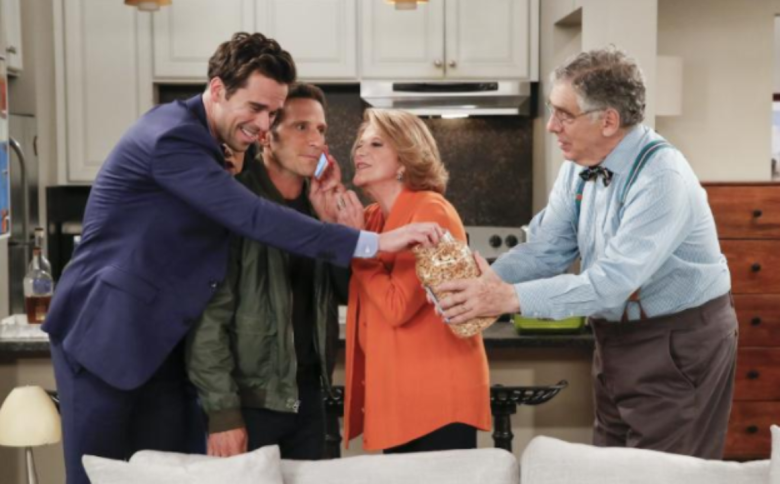 On the Bridge night front with the Stevensons (these plot lines are SO exciting!!!! /sarcasm) it is discovered that the Stevensons were cheating. They forfeit and leave. Andrew goes through a series of cheesy gifts, ultimately settling on dressing in a weird 80’s costume to look exactly as he had the night he met eve and playing saxophone for her. The rest of the family rushes in to share anniversary cake, and Andrew continues playing sax for them. Sigh. I’m glad this was the mid-season finale. I could use a break.