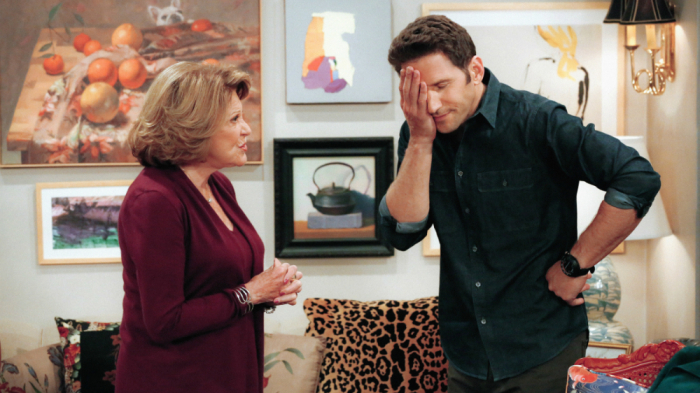 Wow. I can’t remember the last half hour of television that I watched in which I did not find one single thing funny whatsoever. That doesn’t even happen in most dramas. 9JKL, with its pilot episode, is abysmal. Now, normally I give the caveat that pilots are hard, it’s mostly required set-up, and that series should really be judged once they are at LEAST three to four episodes in. You have to give the actors, writers, and to a lesser extent directors, find their rhythm and hit their stride. A lot of series can turn a disappointing pilot around after a few installments. And that very well may be the case with this show. But I found so little substance, so little promise here that I do not feel all that bad condemning this show from the get-go.

Based on the real life experience of actor Mark Feuerstein and his wife, the series follows Josh (Feuerstein) who, due to having lost all his money in a recent divorce, moves back to New York City from Los Angeles and occupies an apartment between his parents’ and his brother’s. His parents are the overbearing and oblivious Harry (Elliot Gould) and Judy (Linda Lavin). Harry is a man so blind to social graces and the feelings of people around him that it makes you wonder if some form of dimentia isn’t setting in. Judy is overbearing to the point of creepiness, and not in a funny way. “I once had those little balls inside me,” she tells Josh when he refuses to change out of his clothes in front of her. There were several other testicles references throughout the half hour that were more cringe inducing than laugh worthy. 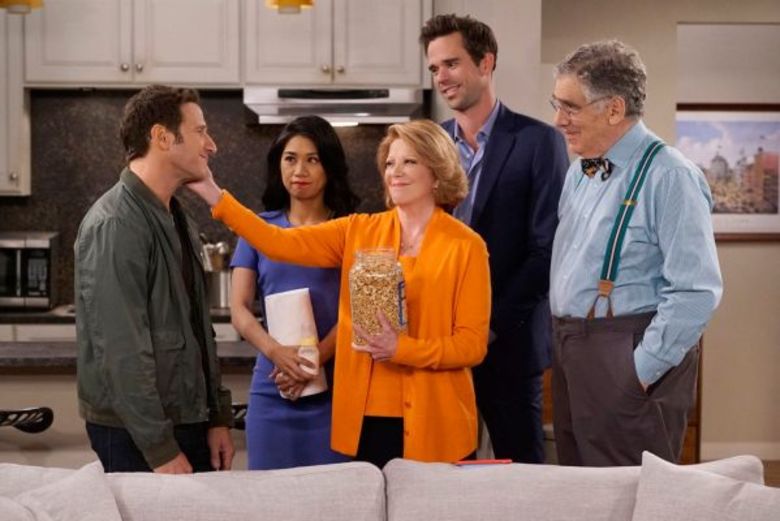 On the other side of his apartment is his surgeon brother Andrew (David Walton). He’s married to Eve (Liza Lapira) and they are both so bland and boring in this episode, I couldn’t tell you one other thing about the two. Oh, wait, they have a baby. Surprise, surprise. The rest of the regular cast is rounded out by wacky doorman to the building Nick (Marr Murray) and a little Asian know-it-all kid named Ian who hangs out in the building lobby for some strange reason. Those two are perhaps the most tolerable of the bunch, but it’s not saying much.

The series picks up with Josh’s parents cooing over him sleeping in his bed as though he were a baby. He wakes up and we quickly see how terrible of a decision this was for him to move in here. It also makes it completely unbelievable that an adult male would do this; he had to have known how intrusive his family would be before he took the apartment, right? Anyway, things get moving and Josh soon connects with an old friend from college who he always had a crush on. She just recently ended a relationship as well. Her reason? Her man’s parents were just TOO overbearing. OH NO! Josh now has to sneak her into his apartment without his monster family ruining everything. Spoiler alert, it doesn’t go well. His mother literally tries to break in and his dad shoves a piece of melon in the girl’s mouth. Extremely irrational, and annoying behavior. There is nothing to like about either of them. In a side plot, through a friend of a client of his dad’s business partner (or something like that) Josh is introduced to movie director Paul Fieg, playing himself, and is given a bit part in his new movie. The family gathers around immediately after Fieg leaves the bar they are meeting at, and Josh gives a heartfelt thank you to his family. But why? These people are awful! You need to get away, Josh! There may be an entirely better, and funnier, and more likable cast of characters for you to meet somewhere else! It’s not too late! (It is.)

It’s gonna be a tough few months getting through this one if it doesn’t take a dramatic turn for the better.