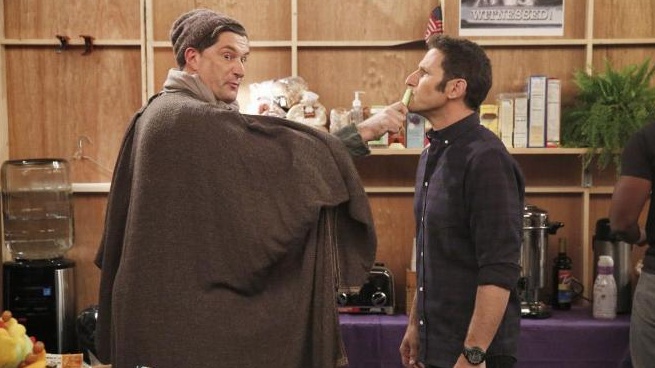 Another swing and a miss for 9JKL. This week Josh rushes into his parents’ apartment to find his brother Andrew relating a story of his life-saving open-heart surgery he performed to his parents over dinner. Josh interrupts him to give them the news: he got a part in a new movie, a mockumentary from director Walter Michaelson (played by Michael Showalter in a guest spot). His parents are thrilled for him and insist on coming to visit the set. Because wasn’t it so fun last time they visited? We flashback to when Josh was filming an episode of Blind Cop and the hijinks Judy and Harry got up to that day (Harry walked in front of the camera during a take! Oh no!). Now Josh is worried they will show up and ruin his new movie gig!

Later next door, Andrew finds Eve all dressed up. She’s in a red dress and red lipstick (“Either you’re going to the club or you’re having an affair with a matador,” Andrew tells her. That doesn’t make sense though because why would a matador want a date of his to wear read and attract a bull. Come on, guys, read up on your matadors.). Anyway, Eve is upset she is once again going to be the only one of her girlfriends there without their significant other. But Andrew refuses to go because he does not know how to dance and he will not be one of those guys who can’t dance that everyone makes fun of. And so Eve leaves to go stag. 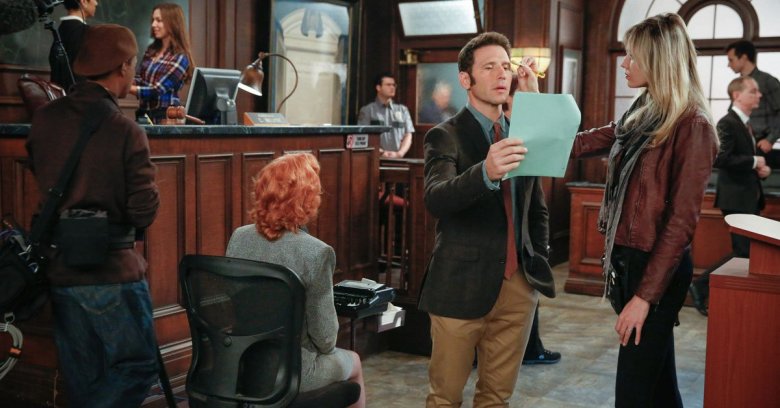 On set, we meet director Walter Michaelson, dressed as a homeless person for some reason and completely aloof and oblivious. None of his jokes work and I’m all but positive Michael Showalter detested doing this, but I’m not going to hold it against him (or any of the actors) because getting on a show on CBS must be a nice payday. Josh wants to impress him very badly. He gets new lines delivered to his dressing room thirty minutes before he is set to shoot. He has to get to work memorizing them, but his parents show up and distract him, his mother chomping on celery loudly. Eventually, Josh kicks them out and forbids them to talk to anyone on set but of course on their way out they run into the director, who ends up casting them as jurors in Josh’s scene. This makes it quite hard for Josh to concentrate when cameras are rolling.

Back at the apartment, Andrew runs into doorman Nick (played by the once again show-stealer Matt Murray). Andrew observes Nick busting out some dance moves by himself in the hall while listening to an audiobook on tape. He asks Nick to help him learn how to dance so he can go to the club and make his wife happy. The dance lesson scenes are the closest we come to actual laughs this episode because Matt Murray is actually a talented physical comedian as well. Nothing too harrowing here: Andrew semi-learns to dance and later impresses Eve at the wrap party for Andrew’s movie. 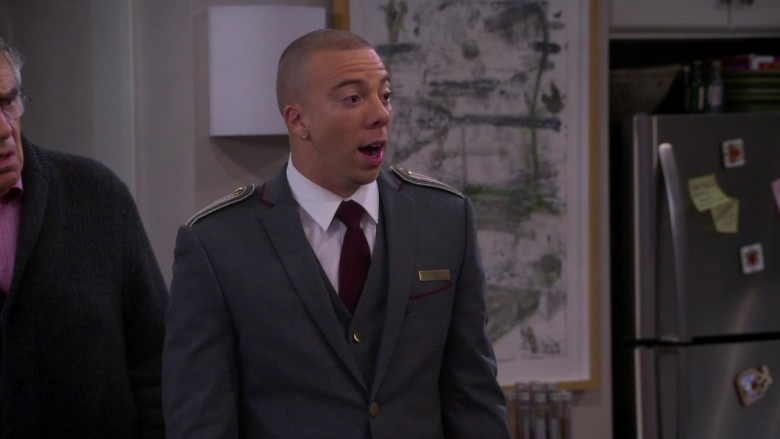 Speaking of that, Josh makes it through his scene and is livid with his parents for intruding on his work. But then he talks to the director who saw it entirely differently. He appreciated Judy and Harry for who they were and liked what they brought to the scene. This prompts Josh to apologize to his parents, saying he realizes now that not everyone sees them the way he sees them. He says he’s lucky to have them. It’s cheesy. And not funny in the least. Next week is the winter finale, and I am so ready for a break from 9JKL.