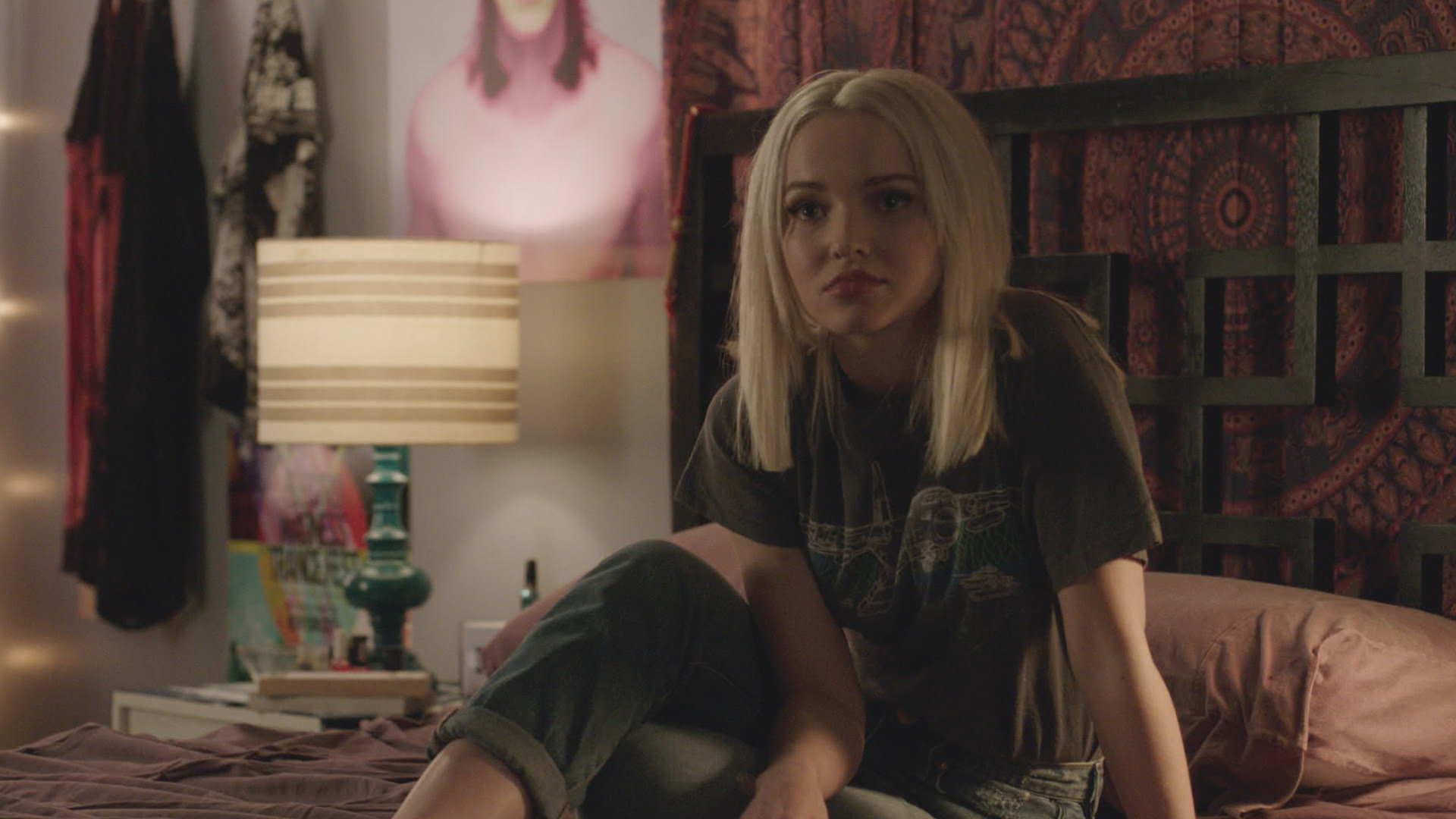 Agents of SHIELD returns with an episode full of past references and sleeping plot points in “All the Comforts of Home.” It establishes a new villain, a new base, and a new problem to fix all while calling back to the previous four season’s worth of villains, artifacts, and plot points. It’s a great episode that does everything it needs to and moves the story forward almost because it’s so tied to the past.

First, I want to talk about General Hale and her daughter because I think they did something really savvy there. We met General Hale in the episode where Fitz figures out what happened to the rest of the team, and her introduction showed her brutally executing the subordinates who let Fitz slip through their fingers. This episode started with Hale addressing normal family problems with her teenage daughter Ruby. Ruby is like a Quake Groupie and asks plenty of pointed questions about whether her mother is the good guy or not. It all seems very sweet and humanizes Hale, which is appropriate given that she’s the new villain of this chapter. That humanizing factor is twisted within the same episode when it’s revealed that Ruby has been raised to be a trained killer and she’s locked away in a vault rather than in a normal teenage bedroom. Hale is revealed to be even more monstrous than we were led to believe in the first place. That play on traditional tropes–giving the villain a soft side and then immediately twisting that into something even more horrifying–is something I found extremely satisfying. I also love that Hale found Creel in the tag and appears to be making some kind of anti-Avengers. 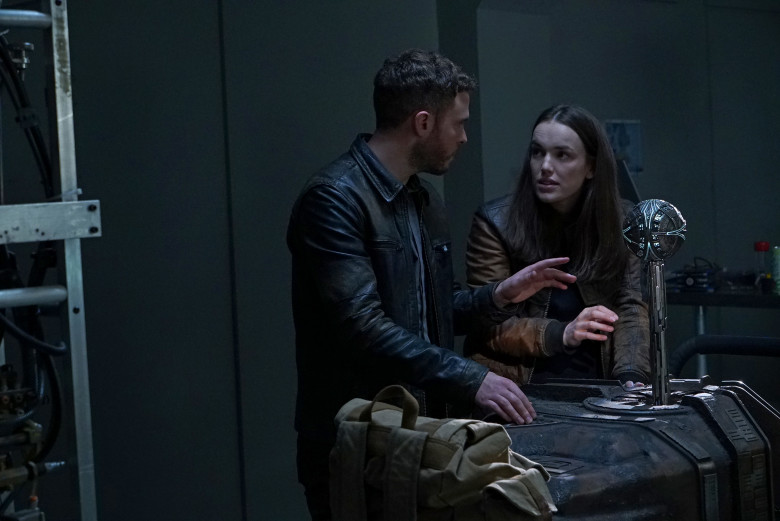 Speaking of Creel, this episode is phenomenal at bringing back in everything this series has to work with, from the first season on. The Lighthouse is a forgotten SHIELD shelter, complete with holographic 1970s Patrick Warburton guiding them around which is adorable. Warburton seems to have a niche as a quirky narrator (think Lemony Snicket and the rules instructor on Disneyland rides) and the simple fact of his appearance put a big grin on my face. Because it’s a SHIELD shelter it’s housing all kinds of crazy things including three (!) different monoliths. Friends, if one travels you through space, and one through time, what on earth does the third one do?! It also turns out that the “light from the sky” is actually the Kree beacon that Hive used in the third season. It lures SHIELD to St. Louis where they meet back up with Piper. I loved Piper showing back up because this show seems to forget about its non-main agents a lot (I mean, where did Weaver go with an entire aircraft carrier?) and it played perfectly because Hive was Piper’s first mission with the team. On the way to St. Louis, everyone on the A-team runs back through every horrible situation they’ve ever been in (to include the Framework, FitzSimmons being dumped out of a plane and trapped at the bottom of the ocean, and, in May’s case, “dancing”) and they all conclude that this situation is preferable. Storywise, honestly, the episode was largely a catalog of what had happened before strung onto the perfect episodic formula of exposition/action that this show has perfected over the years.

Another key element of this episode is how many of the horrible crazy things from the future come to pass immediately once they return home. The monoliths are apparently all shattered and destroyed by a massive bomb blast. Elena’s arms are severed while she’s trying to protect Mack. (I can only presume she was too upset by the situation to run fast? Guys, it’s hard to make severe injuries by weapons to speedy superheroes believable.) I will tell you, though, that my immediate reaction to that was “I mean, robot arms are seriously commonplace in the MCU and you’ve got the guy who makes the best ones right there.” That basically has to happen because one of Robin’s flashback/flashforward scenes showed Elena with two arms getting in an elevator to go kick Kree ass. I’m also intrigued by how parts of the “prophecies” aren’t true. One of the future bad guys told Coulson that an alien light from the sky started it all, but the light was actually from the ground and had nothing to do with aliens–it was just bait to get them within reach of the Hales. That one seems like one of the little misinterpretations of history that might lead our Agents to accidentally destroy the word in spite of themselves. I’m fascinated to see how long Coulson is going to deflect Simmons away from giving him a physical because clearly we all need to know what’s up with Coulson, how long he’s been sick, etc. I’m thinking maybe Elena–especially given her injuries–will be extremely insistent about it and convince Simmons to look into it. 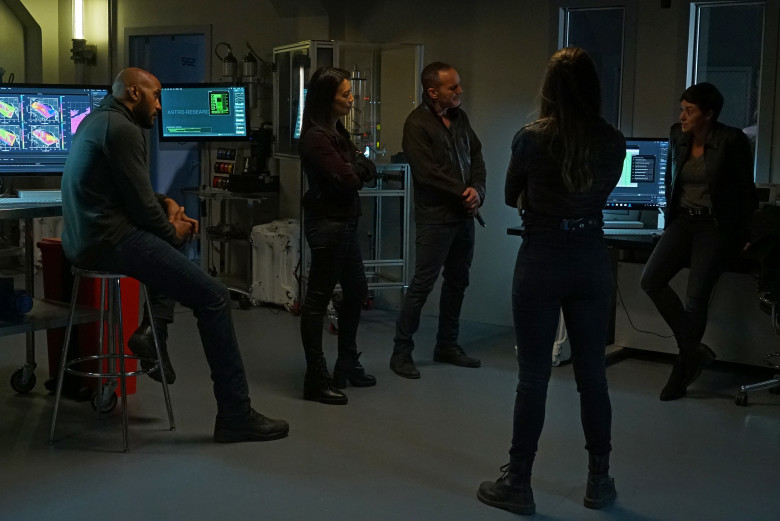 And, of course, one of the biggest shockers was that Deke got transported back in time with them. Deke is ridiculous and I think I enjoy that twist. I definitely enjoy him hugging trees and getting fall-down drunk. Deke’s “crazy” ramblings about being a man from the future and Daisy’s attempts to spring him from jail added a fabulous element of humor to the episode that it especially needed given how dark the main plot got so quickly. Another quick note about Daisy: I loved that she immediately forgave Coulson for icing her and dragging her back to the their home time. Coulson basically explains that he loves her and can’t do without her, though not in so many words, and Daisy accepts that without even a fight. It’s sweet, and honestly very Skye of her as Skye was always more intensely in tune with her emotions and had an intuitive grasp of relationships. Season 1 Skye annoyed me. I loved her in season 2. After season 3, I despised Daisy. After season 4, I adored her. At this point I’m just glad to see that, like with the rest of the episode, they seem to be pulling everything good that this series has had to offer over the years back to the surface.

What I find odd is that this season has somehow failed to get me invested in the story at all. I genuinely like it at this point. I’m running on the presumption that this will be the last season because it doesn’t make sense to believe that it would get renewed. In that regard, since Fitz returned it’s been doing an excellent job of pulling in everything they have to work with from every single season. It does feel like a sort of capstone. Everything in their past is coming back to bite them. The stakes are quite high, and the situations is personally incredibly dangerous for them. The villain is currently a huge mystery, which is a traditional SHIELD ploy that I enjoy. But you always know the world isn’t going to end. Those stakes are too high. They’re going to save it somehow. I think, to me, that’s just making this feel like torture porn. I had to force myself to watch this episode and I didn’t get to it until the very last minute possible for me to turn in my review on time. I enjoyed this episode but I didn’t want to watch it and I don’t want to watch the next one. Whatever story they’re telling isn’t worth the emotional damage that they throw in. I still don’t trust this show and I never will again, so everything just feels unnecessarily brutal. Listen: if they lost me with those first four episodes of hopeless doom and gloom I can only imagine how many other folks they lost.

This episode nails the formula and hits all the right buttons. I’m intrigued to see where this goes, and I love all my Agents of SHIELD endless, but I’m still rather disengaged from this. I don’t think that’s the fault of this episode itself, but more the fault of this series’ years long accumulation of both extreme emotional investment and too many dashed hopes. I’m here for this but reluctantly. Let’s hope it coaxes me back.