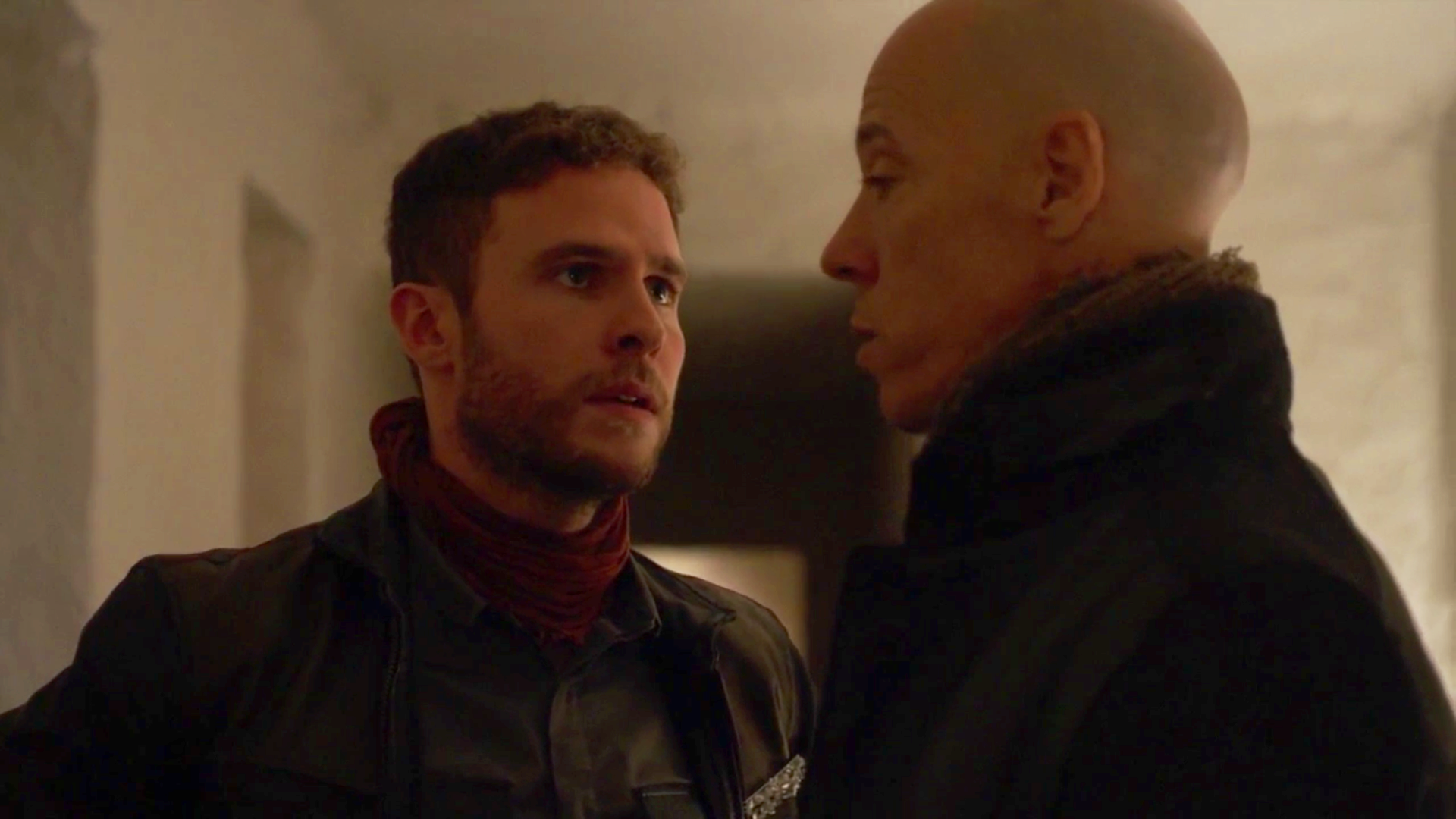 At this point, my thoughts and feelings about Agents of SHIELD are so complicated it’s almost impossible to unravel them. On the one hand, individually, “Fun & Games” is a great episode that manages to hit the SHIELD formula perfectly even without any spy hijinks. It’s even quite beautifully directed by Clark Gregg! On the other hand, if I’ve learned anything in five years it’s that you cannot ever trust Agents of SHIELD no matter what they seem to be doing. One second it’s so amazing that I weep overwhelmed tears of joy and the next it’s so bad I literally want to die. If this show were a person, all of my friends would have been telling me for years to dump them. I recognize this, and yet here I still am letting this show bat me around.

First of all, hello to even more proof that Fitz is the actual heart and soul of this dumb show. I’ve been saying that since the beginning, but it’s kind of hilarious to see actual concrete proof of my theory. I’m not sure it’s 100% because of Fitz, but his return to the ensemble knocked the whole thing back onto some kind of narrative track. Things actually happen this time! Characters cause change. Everything progresses and there’s some kind of hope rather than never-ending despair. Fitz is pretending to be a terrible person to get in on the bad Kree-man’s good side and he does both things in excellent fashion. He’s great at being awful because he had practice in the Framework but at the same time it disturbs him because he’s still our Fitz. I get worried about abuse and mental health narratives when it comes to this show but I will say that, of all the characters, Fitz is the one they’ve never screwed over even once. That trend seems to be continuing which is fine by me. 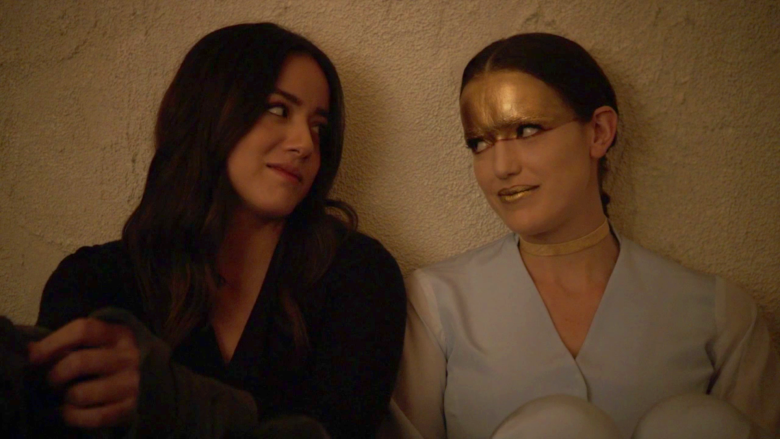 Even the parts that didn’t involve Fitz and his escape plan had some kind of forward energy. Because of all the visitors there to bid on Daisy, the bad Kree-man accelerates terregenesis for the children he bred to be Inhumans. This leads to Elena kidnapping one of the Inhuman kids just after he turns and before he can be sold into slavery. Elena is always great and, rather than doing something stupid for dramatic show as they all were doing in the first four episodes, her actions here display her integrity and moral character. Mack, Coulson, and Elena all have to cover their actions and get in trouble because of them, but they also get out of that trouble reasonably well. In addition, May isn’t dead and she ends up out on the surface with the monster “roaches,” but we all know that a.) there is a colony on the surface and b.) Fitz and his alien buddy Enoch (who I actually think is the best new thing about this season) also seem to be headed for the surface with Daisy and Simmons. They’re all converging and maybe now something will start to happen besides never-ending captivity and death. It’s also a subtle nuance, but I love that Fitz didn’t actually buy Daisy and Simmons to get them free. The three of them fought their way out together. Things would get kind of hairy if he actually owned them, and while that was the original plan, it’s much better that they all got to exercise their agency and cooperate to escape. And bless my Simmons! She got to slit the throat of her captor with a butter knife during their escape. 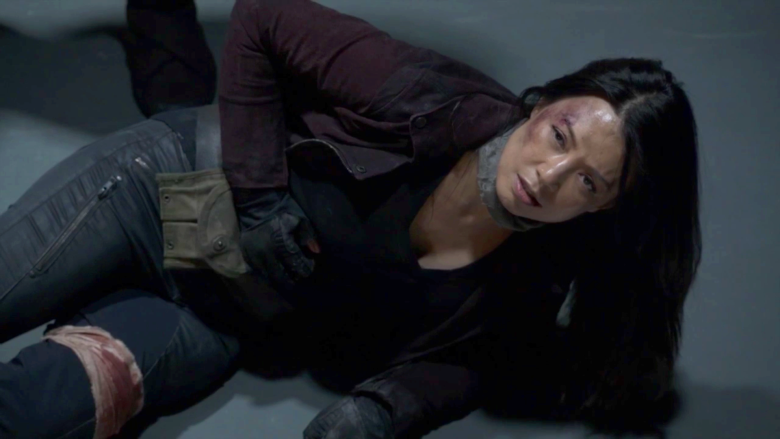 What’s still a bit extreme about this episode is how many characters that were signalled as people we should care about who are outright killed. The MCU in general has never been squeamish about its heroes killing people who hurt others (i.e. “bad people”) which is one of the things I like about it. The guy who had Coulson, Mack, and Elena enslaved isn’t really anyone to cry over. The fact that both Daisy’s telepath friend and Tess, their human pal, are both killed off is jarring. I guess they didn’t want us to forget that this is a brutal world where anyone and everyone is fair game. As if we could when we had to suffer through so much of that already! I’m slightly mystified that they spent so long building them up just to kill them off. I suppose it served a purpose but I feel like it just makes those first four episodes even more of a waste of time.

The thing that I still can’t comprehend is why they spent four full episodes at the beginning of the season hammering home how hopeless and bleak the setting is. Four episodes of no narrative movement whatsoever where the only things that happen are all the characters get more trapped and more abused is an extremely bad storytelling decision. To be honest, it would have been easier to suffer through that if they’d started the other way around: give us Fitz (aka hope personified) first and then show us what an awful situation everyone is in. Having me sit here for three weeks without even a hint at when, where, or how all of these characters were going to get out of harm’s way and actually get to work towards making changes just made me sick to my stomach. I’m insanely devoted to this series and even I would have given it up was I not contractually obligated to write these reviews. The only purpose that I can see that whole chunk of episodes serving is to drive off viewers in droves. I’m not inclined to suggest anyone who left come back either. Always remember lesson #1: never trust Agents of SHIELD. 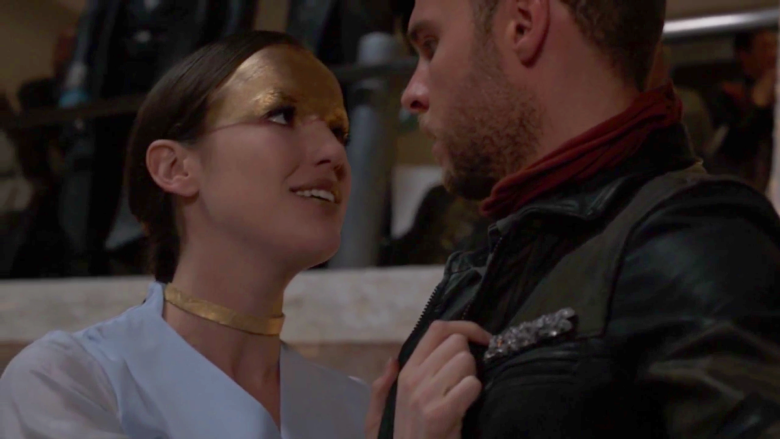 Shut the front door; it’s time for me to cry a little bit about FitzSimmons. I loved all of this. The one thing I’m completely done with is artificial ways to keep the two of them apart. It’s one of the things that made me so furious that Fitz didn’t get sent through time with the rest of them. My immediate reaction was a.) nausea, which stemmed from b.) “here we go again!” Fitz and Simmons back together, working together, mutually proposing marriage in the middle of battle, and then actually escaping actually unharmed is some sort of magic trick for this narrative. They’ve always been the easy target to emotionally wound the audience and they’ve been used that way almost every time the series needed a jolt. At this point I’m exhausted with them getting thrown into that same pattern over and over and over again. Here, they see each other and there’s no fighting, no bickering, no misunderstandings, no injuries or impending death. They finally get to just come together. It’s not quite as satisfying as it should be simply because I kept expecting one of them to die, or get captured, or something that just wouldn’t let them be together, as always. I think I’m a just a bit stunned that the first episode where Simmons and Fitz see each other again they immediately are allowed to have each other. That’s unheard of for this show. At this point, after all they’ve been through, after the way they’ve been treated for so long, any of the “will they/won’t they” “dead/alive” tension has been completely wrung out of the two of them. They’re so much better when they’re drama comes from the outside instead of trying to force conflict between the two of them. Just let them be, okay? Now, if you’ll excuse me, I need to go sharpen my knives so I can fend off any stupid attempts to break them up again.

I was mad when this show was garbage at the start of this season and I’m mad now that it’s so good again. Just pick one and stick with it; come on, guys. It’s clear that they do know how to make this series excellent. They did it for an entire season last year and they’ve done it twice in a row now with this season. What always boggles my mind is how often this show swings wildly from garbage to brilliance. It’s still doing it and I’m pretty tired at this point. This episode was great and suggests that there actually is a narrative for this season beyond just doom and gloom. However, I’m not really excited to see it because they’ve toyed with my emotions one (or two, or seven) too many times.