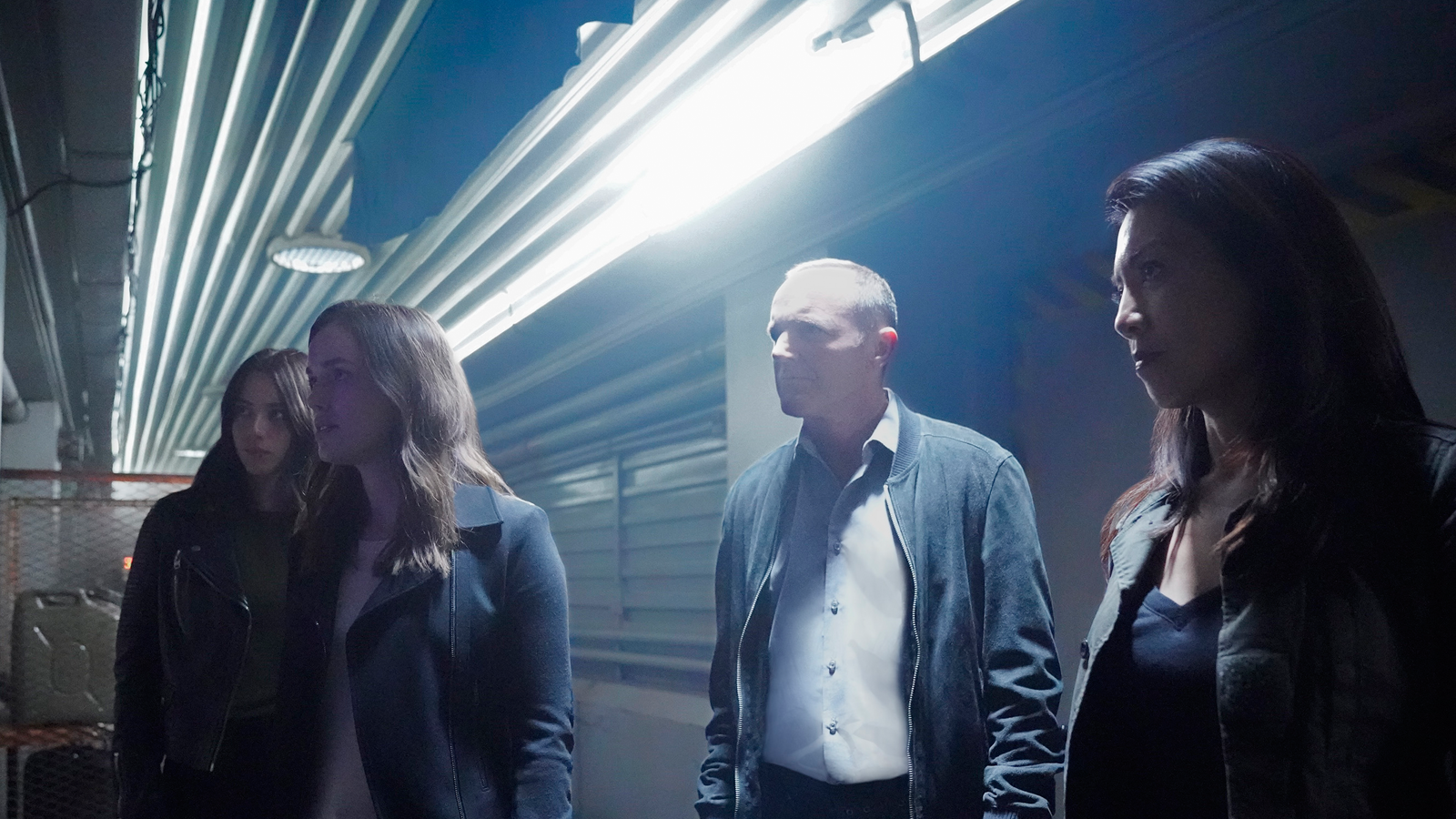 First of all, Agents of SHIELD is back! Praise be to all things holy! I missed these faces! Second of all, the story for this season is kind of lame already. We got two episodes, “Orientation Part 1” by Jed Whedon and Maurissa Tancharoen, and “Orientation Part 2” by DJ Doyle. Whedon and Tancharoen’s offering is a bit of a mystery story while the gang tries to figure out where the heck they are. It sets up the plot decently enough. Doyle is my absolute favorite writer on this series and his episode was serviceable. Doyle turning it something that I call just “serviceable” doesn’t bode well. Alas, they’re going to have to try much harder to get me back into it. I’m an easy mark, it’s not like it’s difficult to make me love this show. The thing is, they do actually have to try, and there are a few things about Agents of SHIELD that make me love it to an extreme degree. Pretty much all of those things are missing from this future space dystopia.

The basic premise here is that (spoilers) SHIELD did something terrible and destroyed the Earth–presumably Daisy Quaked it to pieces–but some dude in the future dragged the entire team minus Fitz into his grungy future-time in order to save the world (that they destroyed). You follow? Cool, okay, except that means the story is literally missing one of the most important parts–aka Leopold Fitz. But whatever. There’s technically not even a single day that’s passed between the end of last season and the beginning of this one, although in timeline nonsense it’s been like 90 years. After the world was destroyed, the Kree showed up and rounded up all the people who were left and started keeping them in an oppressive work colony. It’s a pretty stock grunge dystopia and, even though the world has been destroyed, there’s not much to make me invest in what happens. Like, at this point, the only thing that could make me care is Simmons getting back to Fitz. The rest of them can hang out in future space forever for all I care. It’s never a good sign when I stop caring about everything except my two favorite characters on this show. 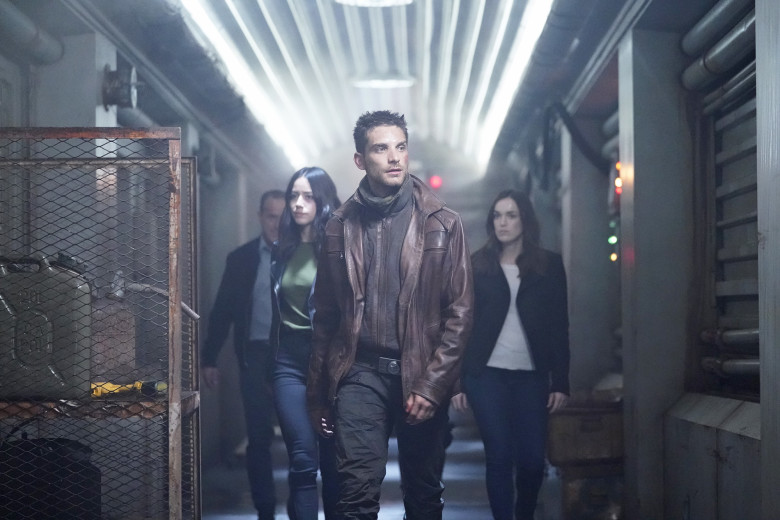 That said, this isn’t terrible. It’s structured decently and there’s momentum and growth. I just can’t invest. I feel like this immediately has the sort of problem that the third season had in that they kind of have to save the world–the outcome is already known. The world can’t end on Agents of SHIELD so you already know the good guys succeed somehow in the end. Honestly, if the world actually ends here I won’t care that much. There are certain things I enjoy about this show and while this story is okay, some of the major things I love are missing. Fitz, for one thing, but I also loved the way Agents of SHIELD insinuated itself into the cracks in the MCU and made them tighter. That’s not this at all. This is like, weird knockoff Expanse but not quite as smart. The other thing I love most about this show is when the whole team works together figuring things out and getting things done and they’re all split up now so I don’t have much faith in this. There’s a formula that SHIELD uses when it excels that’s basically: problem, science side figures out how to fix it, some obstacle has to be fought by the fighters, science side figures things out, fighters have to fight a big boss for everyone to achieve their goal which tends to be obtaining more information. I worship that structure, it’s ones of my favorite things in the entire MCU. It’s completely gone here and the show feels adrift because of it. Just blow up the Earth, please, so we don’t have to live on it anymore. Technically, the world could end here since this is the future, but get real.

Listen, I can’t give this an A because all of the tension is predicated on whether they get back to their own time or not and, for me, the extreme uncertainty about whether Simmons gets back to Fitz at any reasonable age is just the final straw. I’m sick of them using those two for all their drama. Last season did well because their separations and issues were important parts of the plot that had logical causation and fit into the story rather than being contrived. This is just annoying and not okay. I’m tired. Not to mention, Fitz just had an extreme emotional trauma and not only does the show not give him space to process it, he’s not even here. I’m just supposing they left Fitz behind because he’s the one who could figure out how to get them all back where they need to be, but seriously, screwing with FitzSimmons again is a low blow. I’m kind of over this show because of it. Hopefully, they won’t all be in the future long and they’ll get dragged back to now-time and have to worry about how to not destroy the world. Fingers crossed on that one but I’m not holding my breath. 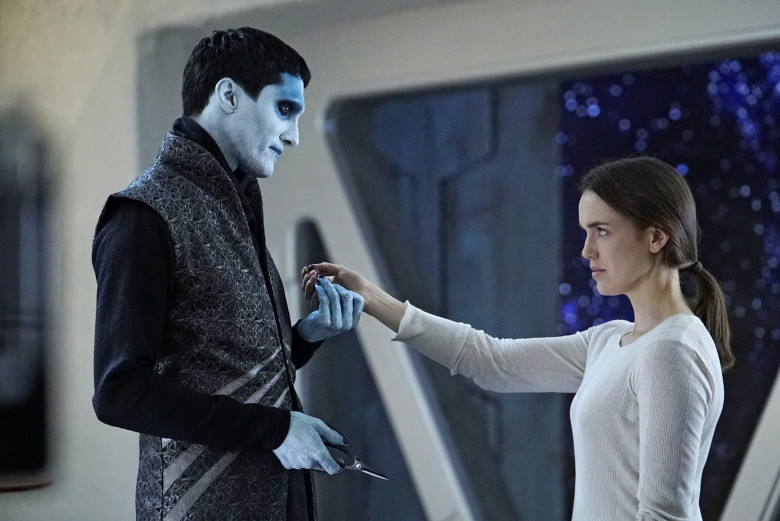 My personal grievances aside, all the characters are well-written and themselves at this point. That was one of the huge stumbling blocks of season 3, even beyond the awful writing and garbage plot: no one was behaving the way they were supposed to. Simmons is excellent, May is excellent, Mack and Elena are cute and funny, Coulson is Coulson, and Daisy is sympathetic and assertive without being obnoxious or authoritative.

This is all right, I guess. I’m glad this show is back. I’m annoyed with a few things. The story is okay though not the kind of thing I’m looking for from this show. I’d like to have more information please so I can judge. Frankly, at this point the mystery doesn’t enthrall me, I don’t care that much if they die in post-apocalyptic dystopia, and I miss Fitz.

The good news is that, after last season’s transcendent glory, I was already prepared for this to suck really hard. It doesn’t suck that hard but it’s not what it needs to be to be SHIELD. Odd numbered seasons of this show are generally horrific and this one already isn’t grabbing me. I’m not as… shall we say… devastated? as I’ve been before by the dismantling of this show’s parts but I’m kind of sad about it. Thank god for antidepressants.