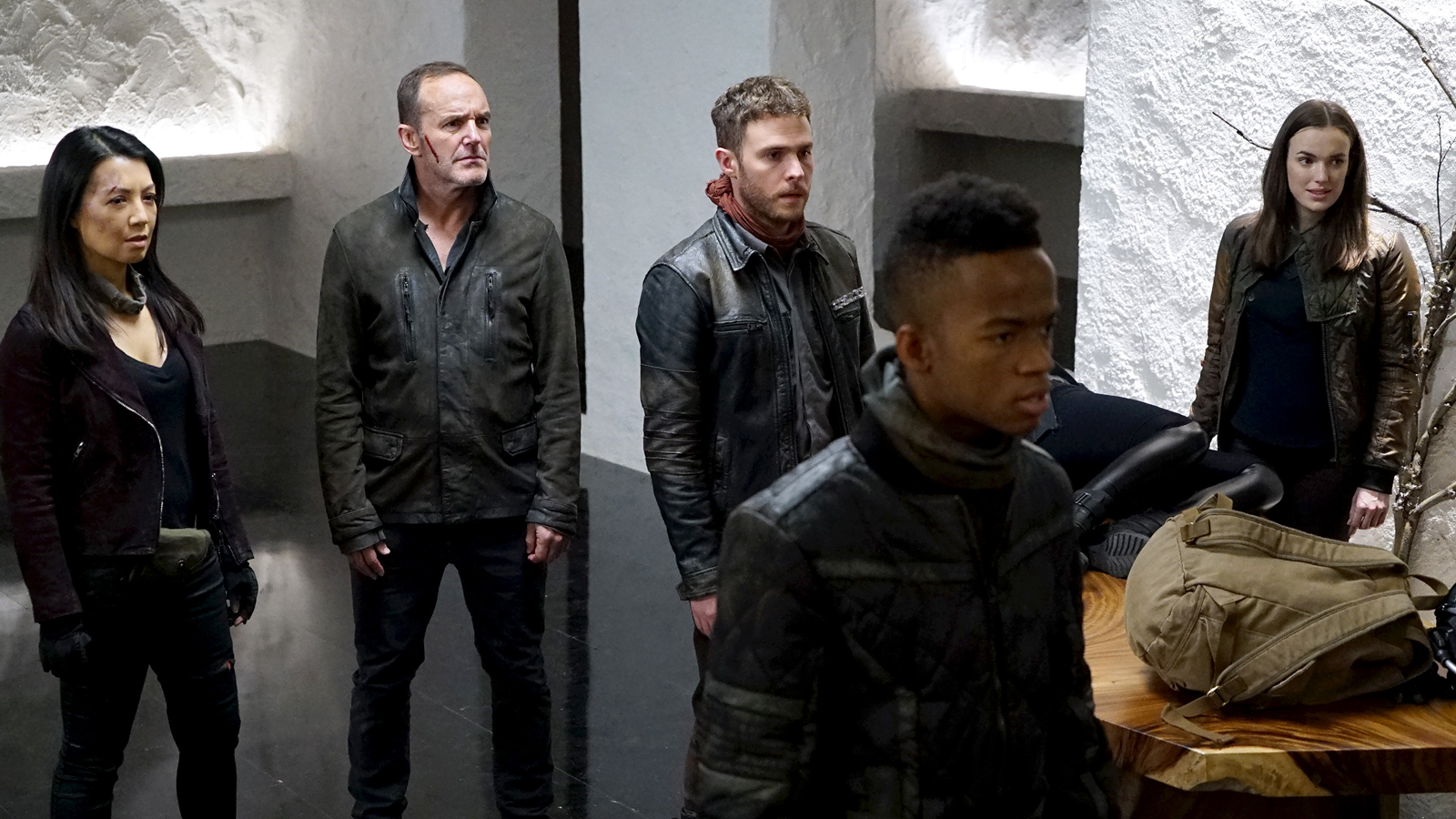 So, remember back when they said “oh, Agents of SHIELD will come on late so we won’t have any hiatuses. It’ll just run straight through.” Such lies these fools tells. At any rate, season four did such a superb job portioning out their story into discrete, hiatus-separated chunks that I can’t say I’m too miffed about this, but I do always scream in an ungodly high pitch of despair when I discover when, where, and how long these hiatuses are going to be. All of that to say, of the four mid-season finales that split seasons in chunks of ten and twelve episodes, “Past Life” definitely outshines the others. Bless whoever realized that Jeffrey Bell’s style is extremely unsuited to narrative closure (or, ahem, narrative at all) and handed this episode to my actual favorite writer on the staff, DJ Doyle. He also wrote the second episode of the season which is one of the only things he’s written for this show that I just did not like, but I don’t think I can blame any of the writers individually for the garbage that was the first four episodes. Free pass on that one, buddy.

I’m a little bit of a time travel junky and Elena’s time loop tickled me to no end. It’s a little morbid to enjoy a character that I love being tortured for decades but it used everything the show has so well! Elena keeps being revived and killed whenever they need her, they’ve cut off her hands so she can’t fight, and she has to talk to her past self (aka “our” Elena) to try to tell her what to do differently or how to save the world. I love that she was Casius’ “seer” rather than some newly introduced character, and I love how it picks up from Elena charging full force at the Kree that we saw in Robin’s visions. If we’re defining the world by Hogwarts houses, Elena is probably the biggest Gryffindor in this cast (yes, even over Fitz.) She’ll defend innocent people at all cost, and she’ll use any method to do it so long as it doesn’t hurt anyone who doesn’t deserve it. Elena’s idealistic but not naive and she’s practical enough that being confronted with her own horrible future wouldn’t send her into a spiral the way it might some of the others. She even tries to save her future self from captivity. Her loop is also excellent because Robin didn’t quite get a chance to tell our heroes what the future holds while Elena has lived it, knows that it’s essentially fated, and is still trying to get things to change. I’m sure that also sets up an excellent source of conflict between the people who want to listen to future-Elena’s warnings about Coulson in particular and those who don’t. 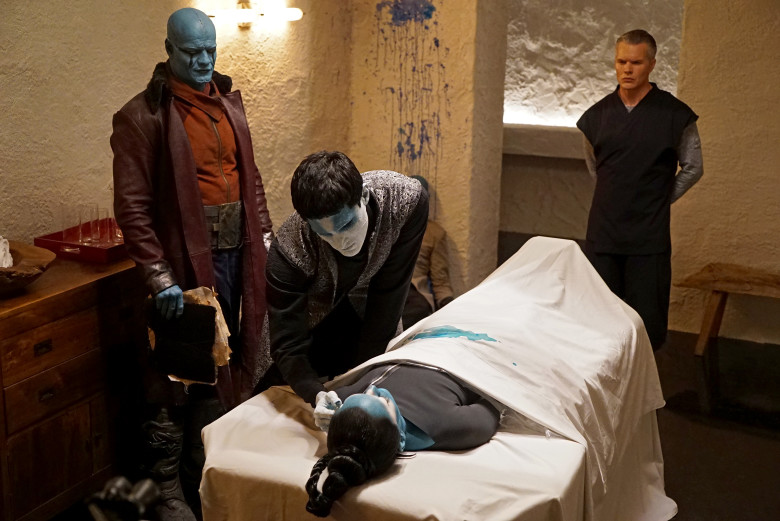 It sometimes strikes me how strange it is that I obsess so much over this show and very rarely even mention Coulson. He’s the bones of the entire operation and what holds the show together, but oftentimes you can’t really see him because so many other characters and plots are always taking center stage. I don’t pay much attention to him but the show wouldn’t work without him. It’s a bit like not noticing the air you breathe. That’s why I love everything about Coulson in this episode. The idea that the team somehow ends up destroying the world because they choose to save him out of love and loyalty rings completely true. It’s a bit out of the blue that he’s suddenly dying, but I trust that it’ll make sense once they explain it. The stuff on his chest looked a lot like Tony Stark’s palladium poisoning but it would be nice if it had something to do with when he got stabbed in Avengers so we could bring this all back full circle. I also loved how he refused to let Daisy stay in the future. She was trying to protect the world and, while he said he needed her to be a leader, I suspect he’s too emotional and protective to just let her stay behind. I don’t like when characters are coerced, kidnapped, or forced to do things against their will but in this case his hauling Daisy back to the right time feels right. I’ll have to ponder that one more.

Flint gets such a fantastic moment of cool that I am a bit sad we don’t get to take him back with us. First I thought he was going to go back in time to keep the world from flying to pieces when whatever happens blows it apart. Then I thought he was going to find all the pieces of the shattered monolith. Instead he gets to make one completely from scratch out of other rocks. I both did not expect that and absolutely love it. Mack gets to shepherd them all through the dangerous Lighthouse corridors, Simmons coaches Flint through what he needs to do, and Fitz is just a beautiful deadly monster setting booby traps for the Kree. For a hot second I thought they were going to make a rift between Fitz and Simmons because of Fitz’s new ruthless tactics, except then Simmons pulled something just as deadly. I’m all for that. (And of course Fitz is the kind of adorable creature that constantly would refer to Simmons as his fiancee. Please, friends. Send oxygen.) I also really like Simmons’ newfound role as like an Inhuman life coach. She understands how their powers work better than anyone and I like that she’s come from being terrified of Inhumans and distrusting their powers to being the point person when it comes to comforting them and helping them discover how their own powers work. Mack’s showdown with Casius was a beautiful combination of great action scene with genuine pathos and I loved that Simmons got her fitting revenge on Casius a second time while Mack landed the fatal blow. It’s episodes like this that remind me how much I love all the characters, not just two.

I am enamored with the way this episode wrapped up this ridiculous storyline and managed to shed all of its extra characters. Enoch and Deke had the best exit since they got to send our friends back home. I liked how Deke’s idealistic nature won out over the opportunistic lifestyle that he’d been forced to lead due to circumstance. He even got to shout Daisy down from doing something dumb by telling her to go be the hero that she is. Deke’s sacrifice seems to me to be one of a belief that our friends can make sure that his awful world doesn’t even come to pass. Enoch’s sacrifice is just practical and loving. One of the things I like so much about Enoch is that he’s kind of the sweet antidote to the LMDs. LMDs were intended to be robots with a positive purpose and they seriously corrupted by selfish interest, vendettas, and science magic. Enoch is some ancient robot who has an extremely dry sense of humor and gentle, upright ethics. I like that he was sent as an observer and yet ends up meddling intensely in human affairs without any qualms. On top of the meddling, he’s perfectly willing to sacrifice himself to make it right and to “help his friends.” I mean, just stab me in the heart. The weird funny ancient robot considers the agents of SHIELD to be his friends for goodness’ sake. Robots are already basically my favorite thing so Enoch hits the spot. 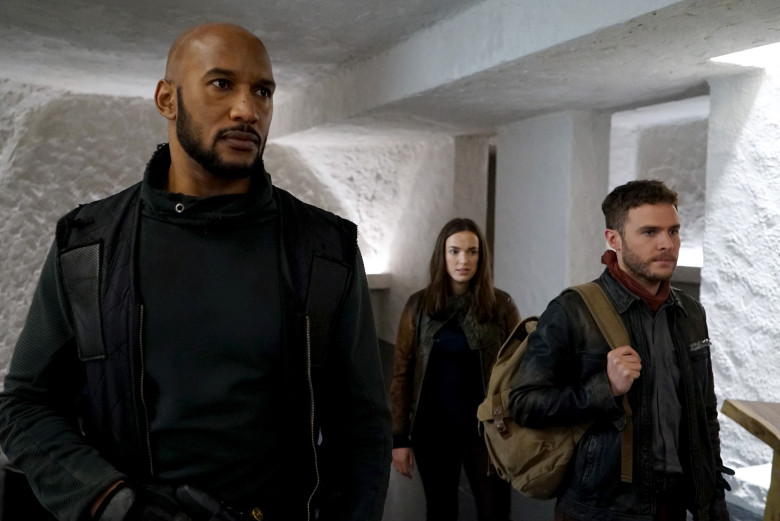 The group being separated right up to the end and cliffhanging us on whether they made it or not is a little bit of a cheap shot. That said, Time Loop Insurance pretty much guarantees that they made it through. See, I know the world is destroyed and everything is terrible, but when so many lazy narratives hinge on whether the characters you love die or not, I genuinely like having that time loop in place. Sure, it’s the end of all things, but at least all the people I care about make it through together.

The direction that this is going would provide an ideal opportunity to actually end this series with an explanation as to why SHIELD never shows up to big world crises anymore. If they’re the most wanted people in the world, constantly on the run, have to change their names etc. then that would be a plausible reason for them to disband and just no longer exist as an organization in the MCU. Personally, I’d rather they know when this show is going to end and actually write an ending and I’ve got my fingers crossed that they’re headed that direction. I don’t exactly want this series to be cancelled but it has to go eventually and I’d prefer it actually have closure when it does. Now feels like a good time.

Agents of SHIELD, as it tends to, managed to close out a chapter that started so horribly that I desperately wanted to stop watching the show altogether in such fun, excellent, dramatic fashion that my insides have forgotten how truly atrocious the beginning of this season was. I still don’t trust this show because it falls on its face too often to feel secure, but I’ve genuinely loved watching this story since it found its footing and I’ve had fun with all the time travel, space, robots, and violent revolution. Once again, SHIELD is crashing all my favorite things together in a thrilling package. It’s no wonder this dumb show remains my favorite no matter how bad it tends to get.