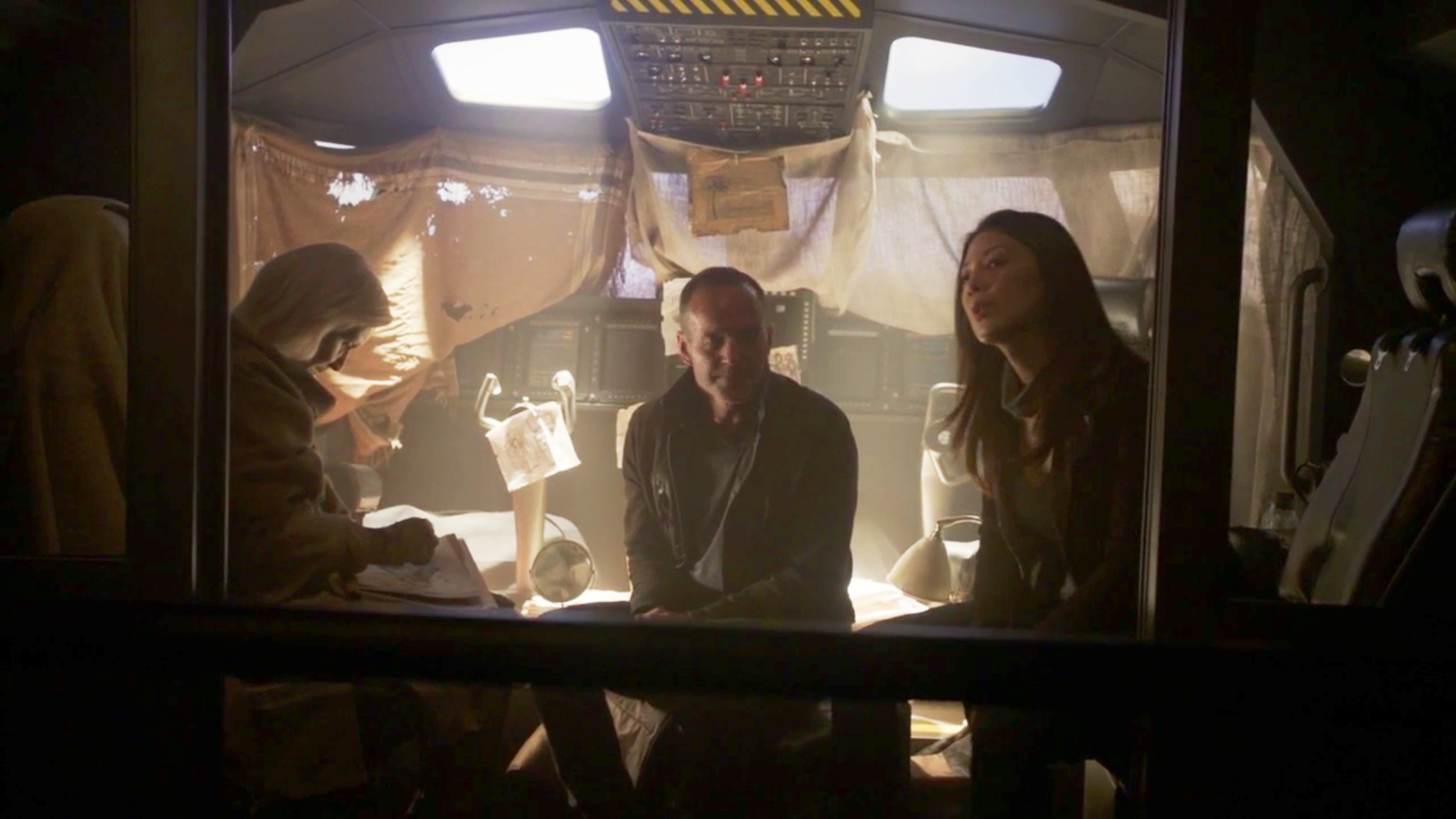 Oh, you guys. Agents of SHIELD is so good and so on top of its game right now. “The Last Day” is a gorgeous example of this show at its best, nailing the traditional structure that makes this story excel, leaving plenty of room for character development across two timelines, and mixing those timelines with such elegance that you invest in all the pieces of the narrative even as you hope that part of it doesn’t ever come to pass.

I feel like this show often forgets to give May even the briefest amount of focus most of the time. She tends to just be the stoic warrior who’s always there to back Coulson. In the past season and (so far) in this one, when they give May her space to shine they go all out. Robot-May, and May battling her way out of the Framework last season were both excellent examples of this. I feel like future-past May is even better. First, she’s the only person who wouldn’t be fazed by a kid who is tripping back and forth through time. Second, she wanted to have a child with Andrew and she’s always been Team Mom, so her taking care of Robin feels absolutely perfect. Third, her whole life got derailed when she couldn’t save the Inhuman girl in Bahrain. Now she gets to protect and raise an Inhuman girl who’s just as crazy but in a different way. She gets to save the girl. It’s sweet, sad, perfectly in-character, and simultaneously heartwarming and heartbreaking. That is to say: May’s piece of this episode is sublime. 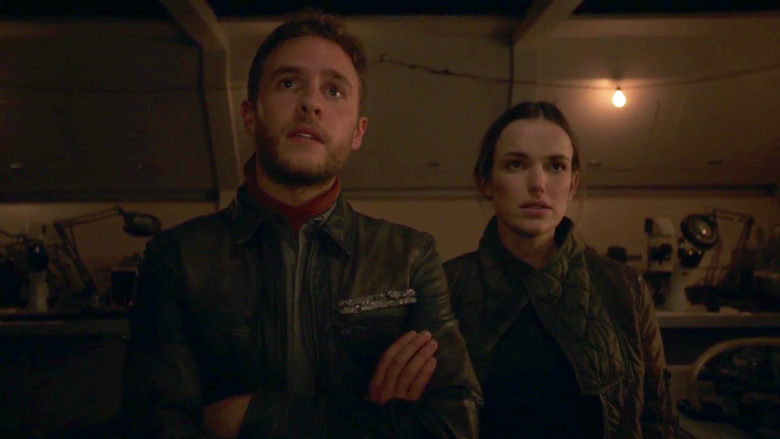 Beyond May, every other character gets to fulfill their role perfectly. Fitz and Simmons are the plot sinew of this show and they get to work hard at sciencing all of the problems that the gang has to face. They even get a soft moment alone together which presents them at their ideal level of sweetness and displays the show’s respectful lack of voyeurism when it comes to their intimacy. Mack and Elena provide the action for the episode as they help Flint rescue humans in the Lighthouse from the roaches that the Kree set loose on the population. Elena got her wicked cool slo-mo scene with the splinter bombs (which I was glad to see!) and Mack’s shotgun-axe is probably my favorite long-running joke on this show. I loved that the supposed allies tried to just out-and-out kill Daisy to prevent the world from ending because it helps highlight the time paradox that this show is playing with and it also gives Daisy the opportunity to show her resilience. Coulson, as ever, is the structure that everything hangs on as he rallies all the other pieces together.

I also find it genuinely impressive that they’ve taken the little girl from this show’s really bad first foray into time travel and woven such a great story off of that. You can just about see the intricate diagrams in your head during this episode and that’s the kind of attention to detail that makes time travel stories so satisfying to me. A large portion of this episode is flashbacks/flashforwards that add context to Robin’s babbling in SHIELD’s present and all of those are quite excellent snippets of the bleak, desperate future-past of our heroes. May has her role as guardian, Elena is riled up and ready to fight, and Mack, Coulson, and Daisy are ominously missing. FitzSimmons are trying to save the world by making schematics for the time machine that will let them change their fates, and future-past Fitz (bless him, how I missed him) goes on a fatalistic, beautiful rant about how time is fixed and can’t be changed triggered by foreknowledge of Simmons’ death. That’s the kind of dark future that makes me actually care about this story, not the “we’re trapped in a dystopia we don’t belong in and have no hope of getting free” that this season started with. I’ve always said this show does best when it makes the peril personal for our main characters because those are the folks we’re here to see, love, and empathize with. This episode did that superbly in the future-past and the present. 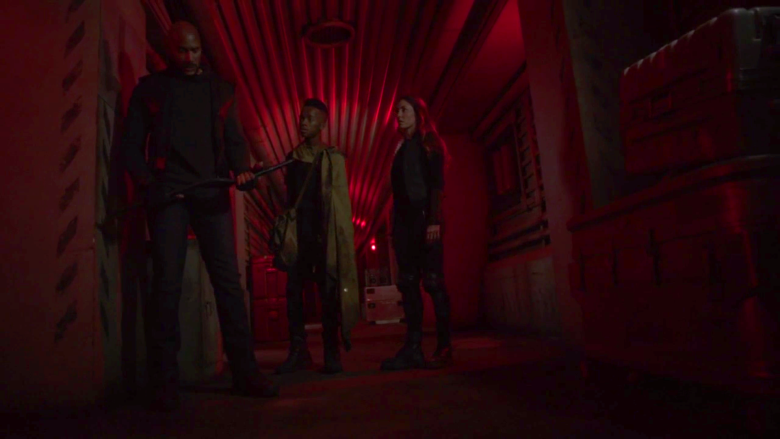 (Listen, though: if Deke’s dad was close with Robin and his mother’s most cherished position was a piece of the white time monolith, friends, that man is related to our heroes in some way and at this point I’m kind of here for it. Although I think I’d like it better if he was just some random guy. Genetics doesn’t dictate talent, character, or interest after all, which I think this series very nicely demonstrated last season with Fitz’s horrible father. My feelings on this theory are to be determined.)

I do have to take them to task just a little bit for how ridiculous it is that the only way to save the world is buy time-hopping to find an Inhuman born fifty years after the world is destroyed. Pulling the nonsense from season 3 (aka “the garbage season”) back into my complaints, they established in the later part of that season that Inhuman powers manifest in response to the environment and the Inhuman population runs on a sort of “intentional intelligent design” that keeps all their powers balanced and the people safe. That would be fine, and you could even buy it here considering that it’s another Inhuman who sees all of time at once and hence knows that this future-kid will exist. What’s not fine is that the garbage season also claims that powers manifested in Lash in preparation for a specific point in the future when the danger he would be facing wasn’t even known or on the same planet, and when he was just (apparently) intended to save one person. In that context, the fact that rock-powers didn’t manifest in someone already on Earth in time to save it from blowing up is absurd. I’m pretty sure I’ll never stop griping about how sloppy season 3 is but, honestly, if this show keeps being great then I’ll ignore that past foible in favor of the current narrative.

I can’t decide if I’m glad or mad that Agents of SHIELD appears to be good again. I’d love to see this show get itself together and keep it together but that’s not really its style. I don’t love and hate this show in equal measures because I definitely love it more than I hate it. The thing is, I love and hate it with equal intensity depending on whether it’s being great or sucking and I love it so much that that same level of hate is dangerous. I’m just trying to let myself enjoy the fact that they got the vehicle upright and—so far—back on the tracks.