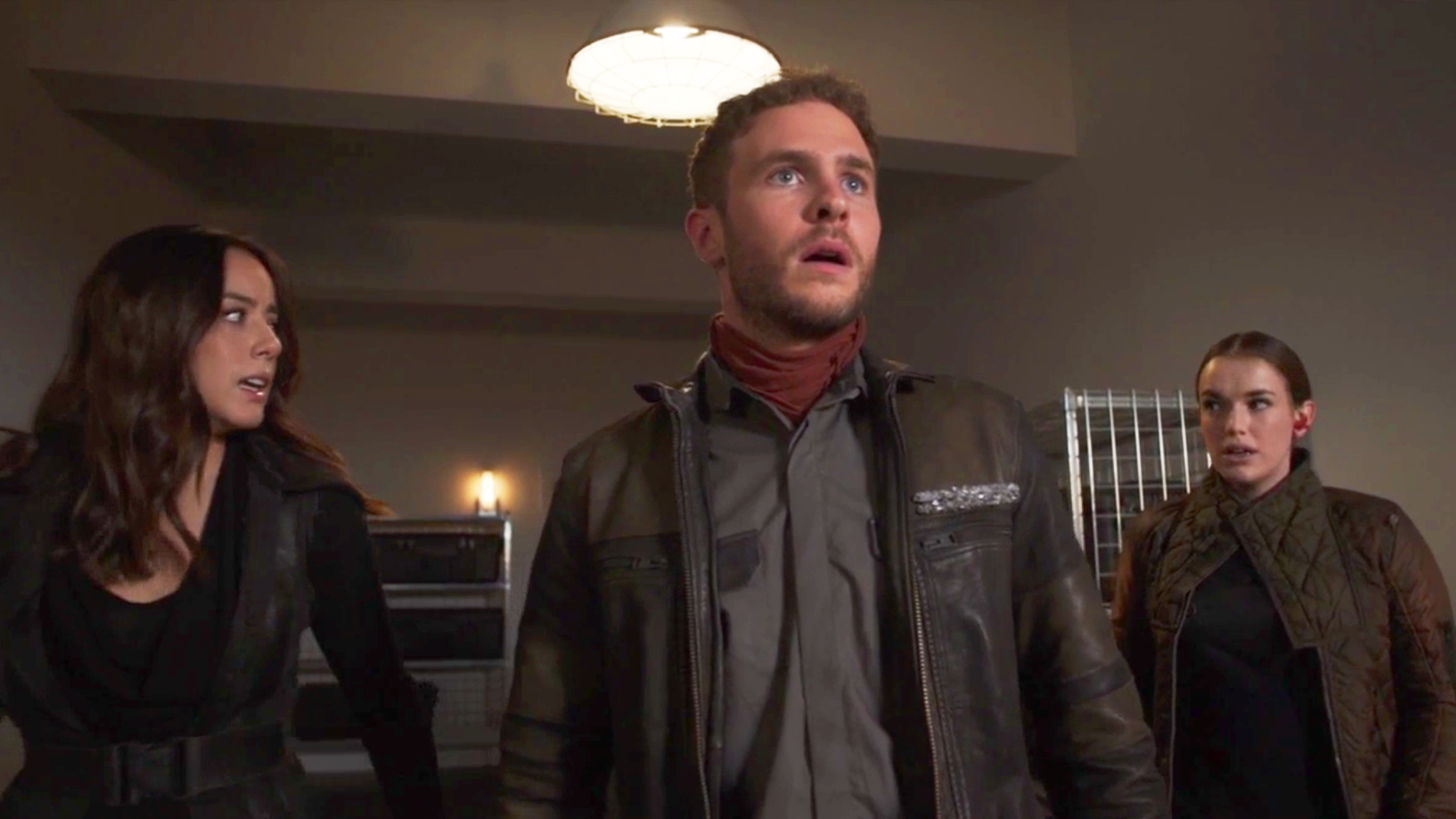 You know, I suppose it’s true to form for Agents of SHIELD that the fifth season is a mixed bag of complete and utter garbage and wonderful beauty. It’s hard to put your trust in a show when it waffles so violently between fabulous and terrible. That said, while the first four episodes remain pointless and idiotic, the past three weeks have ranged from great to amazing. “Together Or Not At All” has plenty of action, character development, and forward momentum. There’s peril to our friends and high stakes but enough slow moments that everyone gets to process what’s happening. They even use some of the things the series already has which is one of my favorite things about this show. The thing is, it’s so hard to really get into this when I keep expecting them to pull some unnecessarily damaging or destructive drama on our main characters in an effort to have a shocking plot twist. When this show is bad, it goes for the most obvious, lame, lazy things possible and–while this show has been so amazing often enough that certain seasons/episodes are my favorite TV of all time–the constant swings in quality have taught me to never believe that they’ve given up the bad.

The majority of the momentum in this episode comes from Daisy, Fitz, and Simmons trying to escape from the contingent of Kree warriors that’s hunting them. They meet up with Deke (the guy who sold out Daisy) who offers to help them and they accept his help only out of desperation. I’ve had a working theory that Deke is some descendant of FitzSimmons which is so cliche I’d roll my eyes and groan if it turned out to be true (though it also hits me in my vulnerable bits so the eye-rolling would be about all it would get from me.) Come on–the guy is like an engineering genius who somehow gets the completely busted Framework up and running. You’re giving me signals, show. Anyway, I loved how their escape melded the best elements of this series into one beautiful package. You had them working through problems and discovering sci-fi science answers to questions, then all having to pause for big knockout action sequences when the danger got too close. That’s the kind of balance that works best for this show and the thing that it always needs to remember. It always does fairly well with incorporating action elements, but the spy/mystery parts of the plot are what actually drive the story. If we’re not figuring things out the characters either get stuck spinning their wheels or pontificating and neither thing is any fun. I’m also putting in an ultimatum that Fitz and Simmons just get to be sweet together forever after. Hitting the two of them with anymore drama given the course of this entire series would be a bridge too far at this point. I think they’ve wrung all the drama out of them that they can without it just being obnoxious. 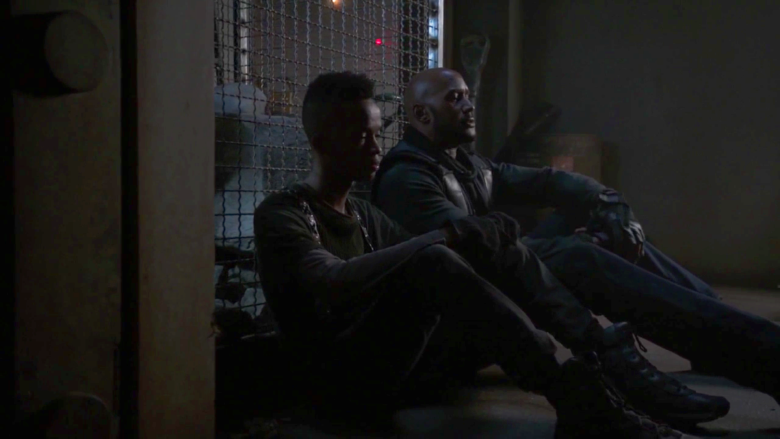 While my kids are where all the plot and action comes from, Elena, Mack, and Coulson are still an important piece of this even though they’re mostly trapped. Almost all of the processing and character moments come from the three of them–particularly from Mack. The Inhuman kid that Elena rescued is beating himself up about getting people killed and Mack, true to form, is there to comfort him and offers to help him do what he needs to do. That ends up meaning that Mack and Elena stay behind while Coulson and co. escape to the surface of the destroyed earth. I’m actually not that torn up about Mack and Elena staying behind. I’m pretty sure it’ll come in handy to have someone on the inside, the two of them can definitely hold their own, and–yes, I love them both to pieces—but I’d be kind of whatever if we just left them in the hellscape future, to be honest. Also, when did the Kree become such pushovers that powerless-Daisy and anyone/everyone else can beat up on them? Even Lady Sif couldn’t take down a Kree warrior back in the day! The ones that May and Mack went up against before beat the snot out of them and almost killed Hive who was like super-ultra-strong. I guess it would be a narrative deadend to make the captors of humanity impossible to fight but the inconsistency makes me twitch.

I really love that this show has brought back Robin in such an important role. I still maintain that “Spacetime” is the worst episode of this entire series (and man do I have some vendettas against a few other episodes too) and–while I’m not 100% on-board with this storyline–it’s a hallmark of this show to acknowledge when something they did sucked but to also the resuscitate the good parts of it. The second season did that a lot with artifacts and elements from the lame parts of the first. Another thing that this episode throws in is the Gravitonium! I’ve wanted that stuff to show back up for years. The last we saw it, Raina had handed it off to Ian Quinn in the first season finale only for both Quinn and the Gravitonium to completely disappear from the story. The Gravitonium and Agent Weaver with the SHIELD aircraft carrier are the two things that I most wanted to know why they disappeared. I was way too excited for the Gravitonium to reappear! Hopefully they’ll do something great and crazy with that but, even if they don’t, it’s just nice that it didn’t vanish into thin air. 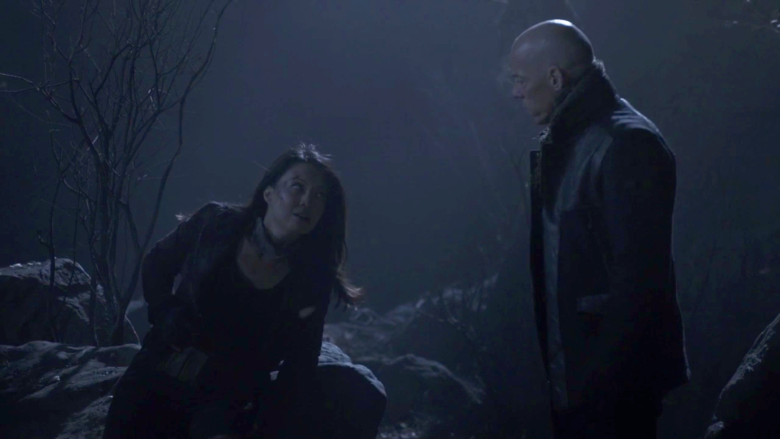 Personally, it’s gut-wrenching for me to watch this show every week now. When it’s good it hurts; when it’s bad it’s devastating. I have to work myself up to it and just prepare to be decimated by every episode. That’s more of my own emotional problem than the fault of the series, but–to be fair to myself–the way they’ve constructed this dumb thing does encourage that kind of investment. When it’s firing on all cylinders, it’s always been the perfected model of cultish engagement. If you take that bait, it sets you up for pain when the creative team decides to phone it in for a few episodes (or whole seasons.)

The problem I’m having is that I actually like this storyline now, but I’m not willing to trust they’ll take this anywhere interesting or fulfilling so I’m reluctant to let myself engage with it again. Our heroes on the run in the dystopian space future destroying slave colonies and trying to save the world could be (and currently is!) actually really fun. It’s just that they hammered so hard on the darkness to begin with, and I’m so accustomed to the patterns they’ve set for these characters that I kind of expect Daisy to actually destroy the world, one or both of FitzSimmons to die tragically in each other’s arms while saving each other (or, more likely, be split up forever), and May and Coulson to screw up so bad they just end up with eternal PTSD after all of their surrogate children get killed. I’m not interested in that anymore. They’ve done it over and over again and we need stories that uplift us, not that keep tearing us down.

Every good grade I give these episodes needs to come with an asterisk that says “*contingent on future developments.”