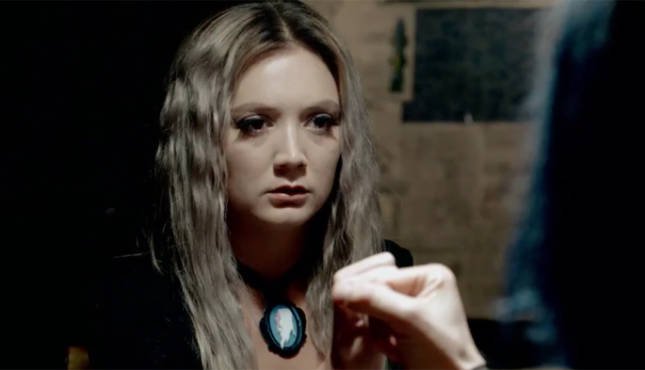 This week on American Horror Story: Cult, we got to flashback into Kai and Winter’s past again, and find out why Winter is so intensely loyal to him despite the fact that his leadership and grasp on a clear plan is aggressively slipping. When Beverly and Ivy are raging about revolution in the kitchen of the Butchery, as they’re being forced to serve Kai and his pseudo-Hitler Youth, Winter tells them the story to placate them, and convince them that Kai’s intentions are good even if his methods, lately, are not. (It seems a bit late to try to imply Kai is good at all after all of the, y’know, murder, but whatever, Winter.)

She and Kai used to troll social justice warriors online — the Venn diagram of people who happily label themselves SJWs and drop-out-of-college-passionate HRC supporters is quite large, so all of Winter’s characterization is a little confusing to me still — and after some particularly crazy-conservative comments on the deep web, Kai and Winter get invited to walk through Pastor Charles’ Hell House. I think it’s happening on Halloween, so maybe that sounded less like a death trap at the time.

Pastor Charles has a bunch of kidnapped people he’s torturing and killing in the house. We get to see Kai before he’s all blue-haired and totally off his rocker as he and Winter try to save everybody. They manage, and in the end kill Pastor Charles with some of his own devices. This is clearly a turning point for Kai. Some combination of the violence, but more so the fact that it was unjustified (the girl Charles was punishing for abortion had only been at Planned Parenthood for a UTI, the guy he’s killing for being a drug addict had been pulled out of rehab, and so forth) is a turning point for Kai.

I’m… not really sure why this was the defense Winter went with. I clearly still struggle with the whole “we’re all REALLY chill about murder” aspect of American Horror Story, which I guess is a “me” problem, but if I were thinking about possibly violently overthrowing an actively oppressive, murderous, misogynistic jerk and somebody needed to talk me down from that, telling me a story about the first time he killed a man would not really be the way to do that. 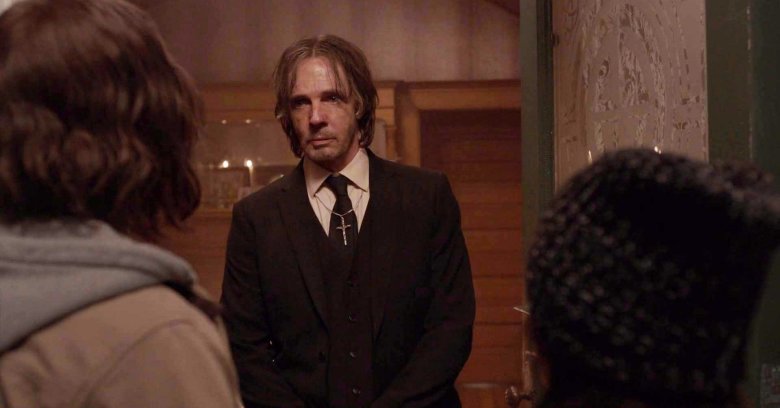 Despite Winter’s dogged defense of her brother, his grasp on her is slipping. He’s slipping himself — his ideas become more outlandish, and the whole making every individual feel important schtick that made him successful in the beginning has gone by the wayside, replaced by a strong conviction that he’s right, no matter how nutty his ideas are. For example, his big plan this episode is that White Haired Colton Haynes will have sex with Winter while Kai has sex with White-Haired Colton Haynes, thereby making Kai the father of Winter’s “Messiah” baby, all while conveniently skipping the incest part of the equation. Winter and White Haired Colton Haynes go along with this, but after they actually get to this “sacred ceremony” Winter changes her mind. She tells guy no and tells him off, pointing out that his sacred ceremony is just some nonsense he came up with earlier than that afternoon.

Outside of the cult (what little remains there, anyway), Ally and Vincent, her psychiatrist slash Kai and Winter’s brother, comes to see her and talk about Kai. He apologizes for not believing her, and claims it’s because he didn’t know she was talking about Kai, as he knows what Kai’s capable of. Vincent claims that Kai must have broken into his office and stolen his confidential files to get inside of Ally’s head. I honestly just assumed Vincent was in on the whole thing, so it’s nice to finally get somebody who isn’t — especially since earlier in this episode, Vincent went to Kai and offered his help making social media videos to spread Kai’s message.

Of course, nobody on this show can outdo or actually double cross Kai, because that might actually be interesting. In the end, Kai’s cult gathers in their clown masks around two prisoners — Beverly and Vincent. Kai murders Vincent while everybody, including Winter, watches. Beverly is taken to an isolation chamber, which obviously Kai has in his house, and then Kai asks the newest member of the cult to unveil herself… And we see that Ally has joined in.

But what I said above isn’t entirely true. Winter is starting to circumvent Kai’s machinations, so hopefully she — and Ally, ‘cause man, girl deserves a win — will in the end get to kick his ass at least a little bit. After she refused to complete Kai’s holy sacrament, she’s punished to community service, being called ‘servant’, and eating gruel. White Haired Colton Haynes delivers her lunch to her while she’s doing community service, and after she insults him, tries to rape her. She shoots and kills him, but instead of telling Kai what happened, she claims that it was Beverly who shot him, hence her lock up.

A note on Ally: she invites Kai over for sloppy joes (a manwich, obvs) earlier in the episode, which is clearly where she double-crossed Vincent. Kai points out something is different about her, and Ally says that he’s done what no amount of medicine or therapy could do — cured her of her fear. I have to assume, for the sake of my own sanity, that this really is a ploy on Ally’s part. But I also need to take a moment to have a massive issue with a mainstream show low key dissing therapy and medication for people who are mentally ill. Come on, guys. Really? All she had to do was confront her fears? Give me a break. 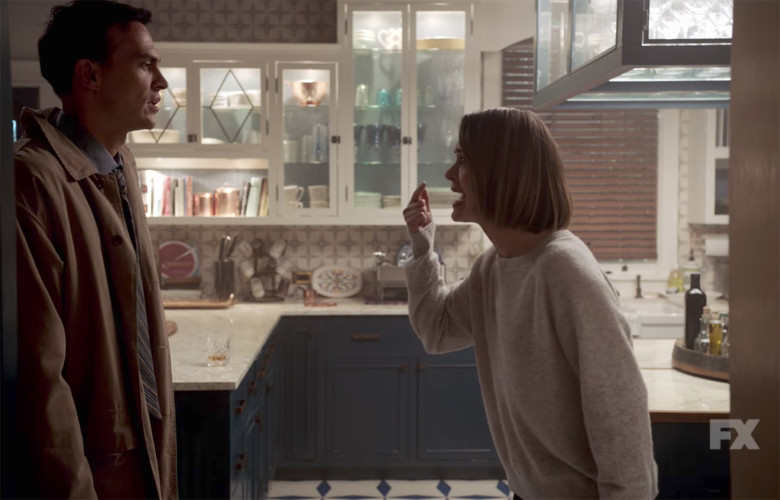 I realize that this is a personal preference thing, but I can’t get past this show’s ridiculous, constant violence and overlay of creepy. It doesn’t make me uncomfortable or nervous or tense in a good way — it just makes me wonder why I’m even watching this. I don’t find anybody on this show particularly compelling, I don’t find the plot to be particularly intricate (quite the opposite), and there is so much murder and so many times Kai comes out on top even though he plausibly shouldn’t that nothing is surprising. None of the twists payoff because they’re constant — if somebody comes up with a plan to go against Kai, I sort of assume by the end of the episode he’ll kill them violently. On top of that, this isn’t incisive political commentary — it’s pretty basic stuff laid over the election to gloss over all of the actually interesting parts of this cult-like mentality that shifts our politics all the time.

I’m just not sure what the point is of any of this, or where there’s enjoyment to be found in watching it. My only hope is that Winter is Coming for Kai, and seeing him finally defeated might make me feel less like I’m wasting hours of my life.