With only three characters left alive on AMERICAN HORROR STORY can the show wrap itself up in any meaningful way? The Blood Moon is in full swing, the hillbilly’s are hungry, and all of the ghouls are out to get Shelby and Dom. We know one person will survive this ordeal, but who will it be?

So the last half of American Horror Story: Roanoke has relied incredibly heavily on the found footage format of story telling to its own detriment. One episode of it was all right, and worked well, but the concept is beginning to grow rather tedious. Sure the fact that cameras were installed all over the house works ok, and at first each participant was recording events as they took place for the show Return to Roanoke: Three Days in Hell so that mad sense too, but now even the hillbilly family is using hand held video cameras and flip phones to record events which seems to be a huge stretch. When the matriarch of the hillbilly family asks her son way he’s recording everything he tells her he likes to watch it later. I don’t buy this. These people are so backwards that the only time they venture out of the backwoods is to sell their marijuana crop. They don’t talk to outsiders so there’s no need for cell phones, and I haven’t seen one piece of modern technology in their home, so what are they watching video camera footage on? This seems to be an instance where it’s convenient for the plot, and for the found footage theme, but makes zero sense in reality. 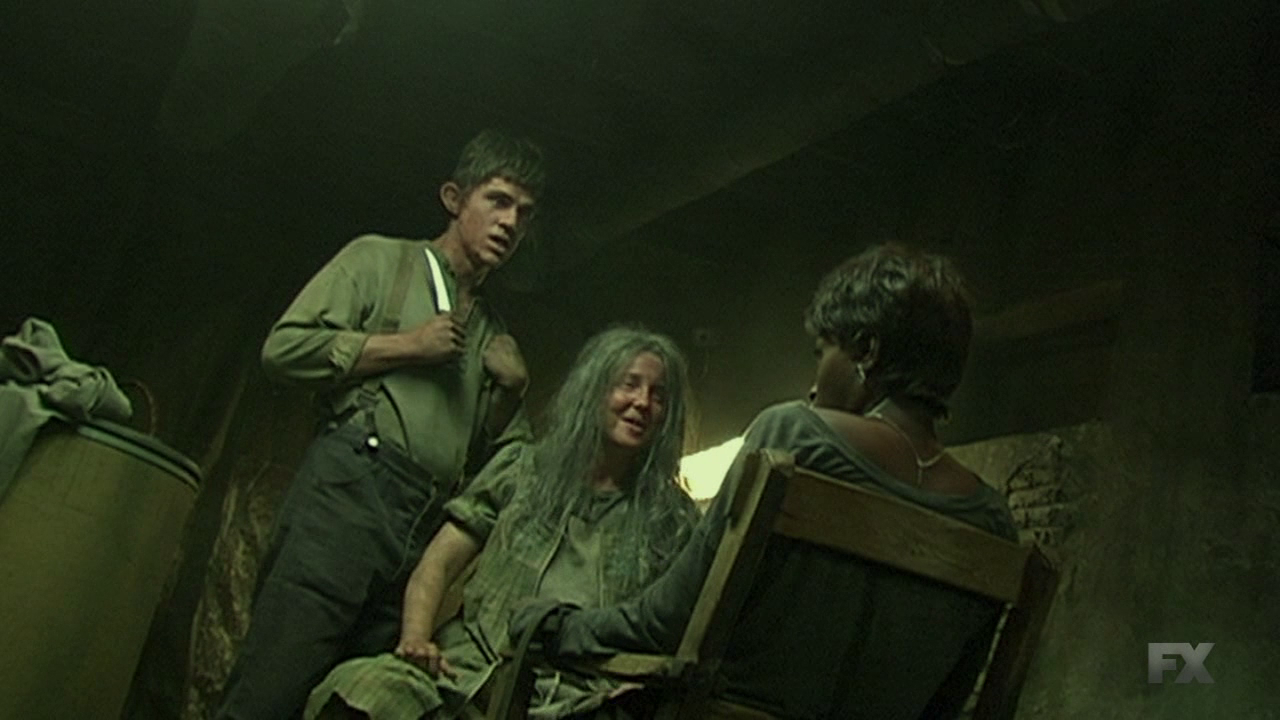 Lee, Audrey, and Monet are still all at the mercy of the hillbilly cannibal family the Polks. We know they love to eat human meat, and they’ve taken their sweet time over the last few episodes when it comes to carving up Lee, but now it seems they’re really ready to dig in. The Mom is trying to teach her son how to carve pieces of meat out of Lee’s leg and shoulder so that he’ll know how to do it in the future. You know, teach a man to fish and he’ll never go hungry. He takes pieces of her leg, shoulder, and cuts off one of her ears as a souvenir before she seduces him, because you know, he’s a horny inbred idiot who’s never been with a woman before, and he falls for the trick like the rube he is. Thinking with his penis instead of his brain opens the door for Lee to escape.

Shelby and Dom are trapped inside of the house by the real Butcher and her followers. They are stuck with no way out except for the tunnel out of the house Shelby has used once before. There’s a little problem though, the Lee family who were murdered in the house attack them, crawling creepily on the walls and ceilings chasing them back into the house. The floodgates have opened during Blood Moon, and besides the Lee’s, the two nurses, and the Pig Man are all inside of the house as well. With no hope left of escape, Shelby and Dom lock themselves in a bathroom to wait out their fate. 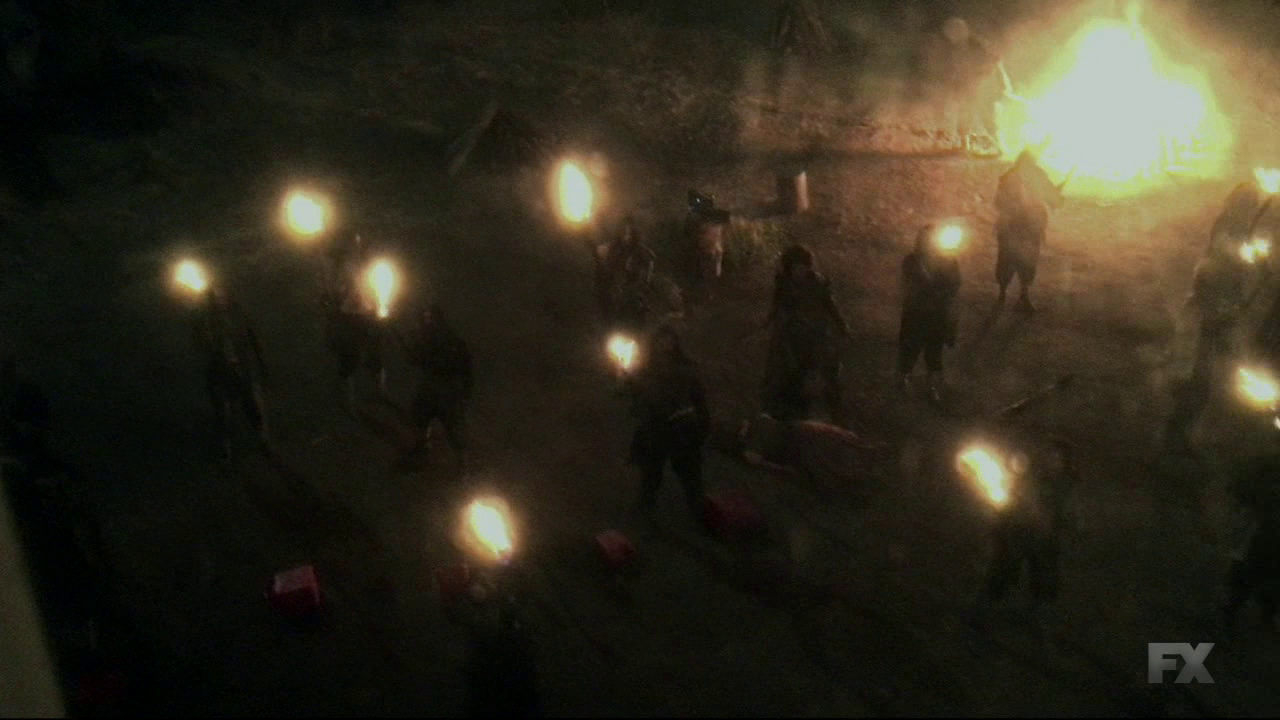 The entire reason Shelby agreed to be on this ridiculous program again was so that she could rekindle her romance with Matt. She loves him more than anything, and when she found out the only reason he agreed to come back was so he could have sex with the Witch of the Woods again she lost her cool and smashed Matt’s brains in with a crowbar. Trapped in the bathroom, she has a moment to realize what she’s done. She’s murdered the person she loved the most in the world and can’t live with it, so she cuts her own throat in front of Dom, leaving him alone to deal with all of the terrors in the house.

Lee escapes and kills the hillbilly who tried to sexually assault her, and then rescues Audrey from having all of her teeth yanked out by the hillbilly matriarch. They kill the matriarch while Monet has already escaped into the woods and is being chased by two of the hillbilly men with flashlights and cameras. Lee and Audrey make it back into the house through the tunnel and find Matt’s corpse in the basement. It unsettles Lee terribly, and when they discover Shelby also dead, she blames Dom and kicks him out of the room leaving him to be murdered by the Pig Man.

There are moments when the characters are facing death when the show is clearly making fun of them. Dom is constantly worried he’ll never get to go work on the next show he has lined up in an exotic locale. He only wanted to play the villain and Sydney has screwed him over. When Audrey is confronted by the hillbilly’s trying to pull her teeth out with a pliers she tells them she paid good money for those teeth. After she escapes their clutches, she turns to a camera she’s carrying and apologizes to her fans if she doesn’t make it since she had so many wonderful performances in store for them that they’ll never get to see now. 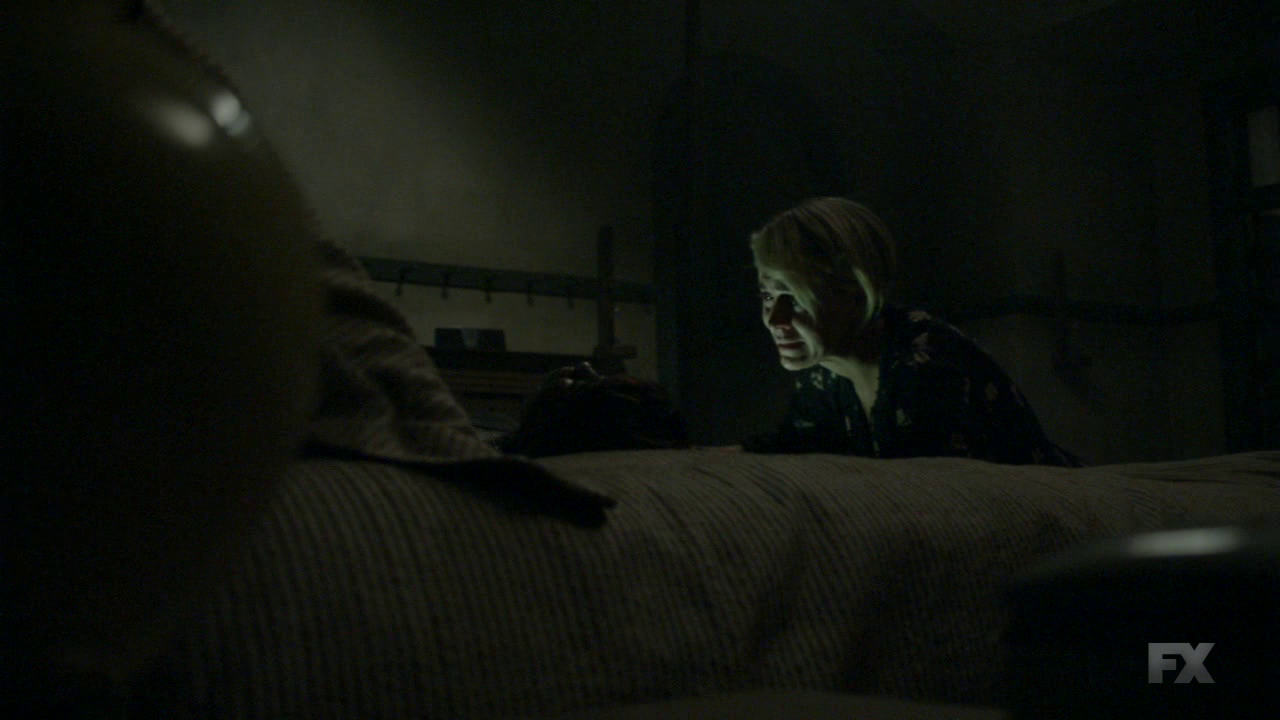 With everyone dead except for Lee, Audrey, and Monet it doesn’t really feel like there’s a hero left to root for. Lee’s back on drugs and has admitted to the camera in a confession for her daughter that she did kill her ex-husband Mason, Monet is an alcoholic with an unpleasant personality, and Audrey is a laughable dimwit who seems to only be left alive for comic relief. At the end Dylan, the actor who played Ambrose White in My Roanoke Nightmare shows up dressed as the Pig Man, and it’s unclear why he’s there dressed up like that, though I doubt he’s going to be the new heroic lead.

In traditional horror there’s always a hero, or character you follow that you connect with and it gives the story more power. In Alien it’s Ripley, in Halloween it’s Laurie, and in The Thing it’s Kurt Russel’s R.J. MacReady. Who is it in American Horror Story: Roanoke? There isn’t one, which is why it feels like American Horror Story: Roanoke has completely failed as a season in the end.