The Miller’s make their last stand against The Butcher in Tonight’s AMERICAN HORROR STORY, but can they escape from her clutches? We learn more about the history of the house, and the land around it, but can the past be the key to their future?

One of the things I’ve thought has been brilliant so far this year is the use of the paranormal documentary series, My Roanoke Nightmare, as a framing device for the show. AHS has basically nailed the format to present us with the chilling tale of the lost colony of Roanoke and the curse they’ve put on the land Matt and Shelby purchase. They use all of the little flourishes from these sorts of shows, and perhaps even do the format better justice than actual shows like Paranormal Witness and My Haunted House. There are always better looking actors playing the actual people, but in this case it’s actors playing real people, played by actors. There’s a couple that’ve spent way more money than they could comfortably afford for their dream house, and there’s the point where everything begins to unravel. They know the format and it’s rules to a tee, and they’ve perfected the art of telling us a horror story inside these parameters. 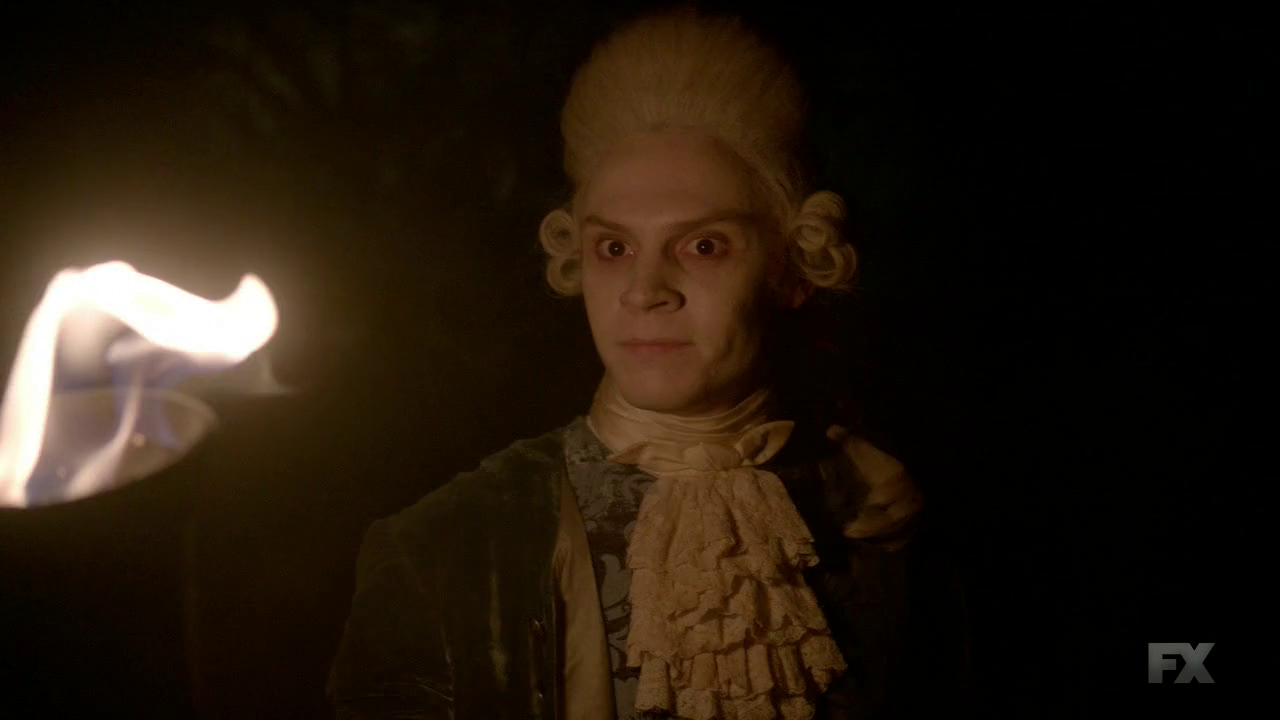 American Horror Story take things a step further this episode, and bring in an actual famous historian, Doris Kearns Goodwin, to tell us the origination story of the house. It was originally built in the 1700’s by Edward Philipe Mott (Evan Peters) as a way to get away from society in Philadelphia. He had acute social anxiety, so had shakers build him this house in the woods as a retreat for his art, and his homosexual romance with his manservant Guinness. Strange things begin to happen from the very beginning, since unbeknownst to him, the land is already cursed. Using an actual historian many people are familiar with gives this history an air of credibility, and it’s a fun choice. She plays the role very well, and is convincing as she relates the story of Edward Mott’s demise. The house was built with escape tunnels in it, since he had a priceless collection of art, he thought someone may come for it, and it would be wise to have a way out of the house if it were besieged. These tunnels will come in handy, but not in his own lifetime. 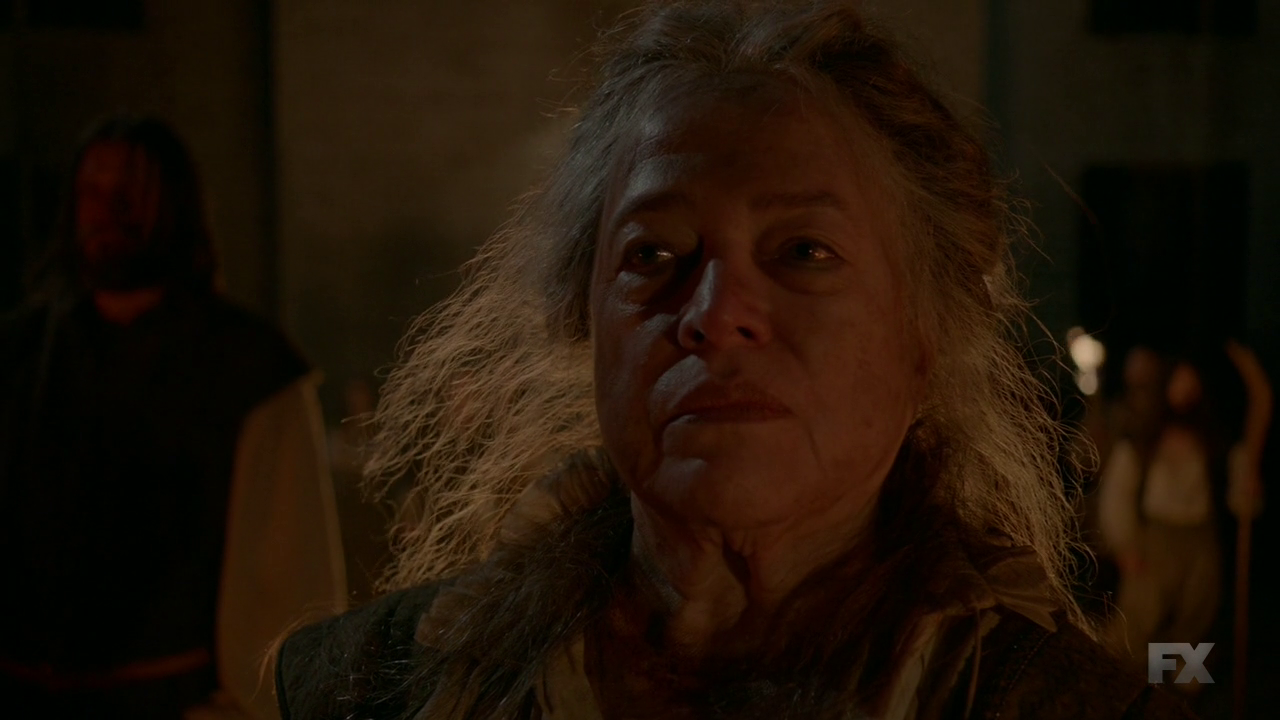 Mott may have been the first victim of The Butcher, and during a blood moon she wreaks havoc on his art collection, and then sacrifices him. According to Goodwin, the only reason anyone knows anything about what happened is because his manservant Guinness escaped and told the tale, though no one believed him. He was instead accused of Mott’s murder. Mott’s meeting with The Butcher segues nicely back to Matt, Shelby, and Flora. We find them in the same predicament they were in at the end of the last episode, as The Butcher and her people have the house surrounded. It’s clear from the paranormal documentary that Matt and Shelby get away, but even though this is obviously the case, the way the writers put it together almost makes the viewer forget this. While we watch them elude The Butcher, it always seems like there’s a chance they’ll be caught and killed by her, even though this isn’t the case.

The tunnels Mott built are the only way the Miller’s and Flora escape from The Butcher, but Mott’s ghost leads them out into the middle of the woods. It’s basically out of the frying pan and into the fire as the hillbilly family they believe has been terrorizing them from the beginning captures them. Frances Conroy plays the Momma with such ferocity that she basically steals the show for what little time she’s in it. These hillbilly’s are every bit as bad as The Butcher, and the worst part is they’ve made a deal with her. They deliver sacrifices to her when she has none during the blood moon, so the Miller’s and Flora are going right back to The Butcher no matter how hard they try to escape. 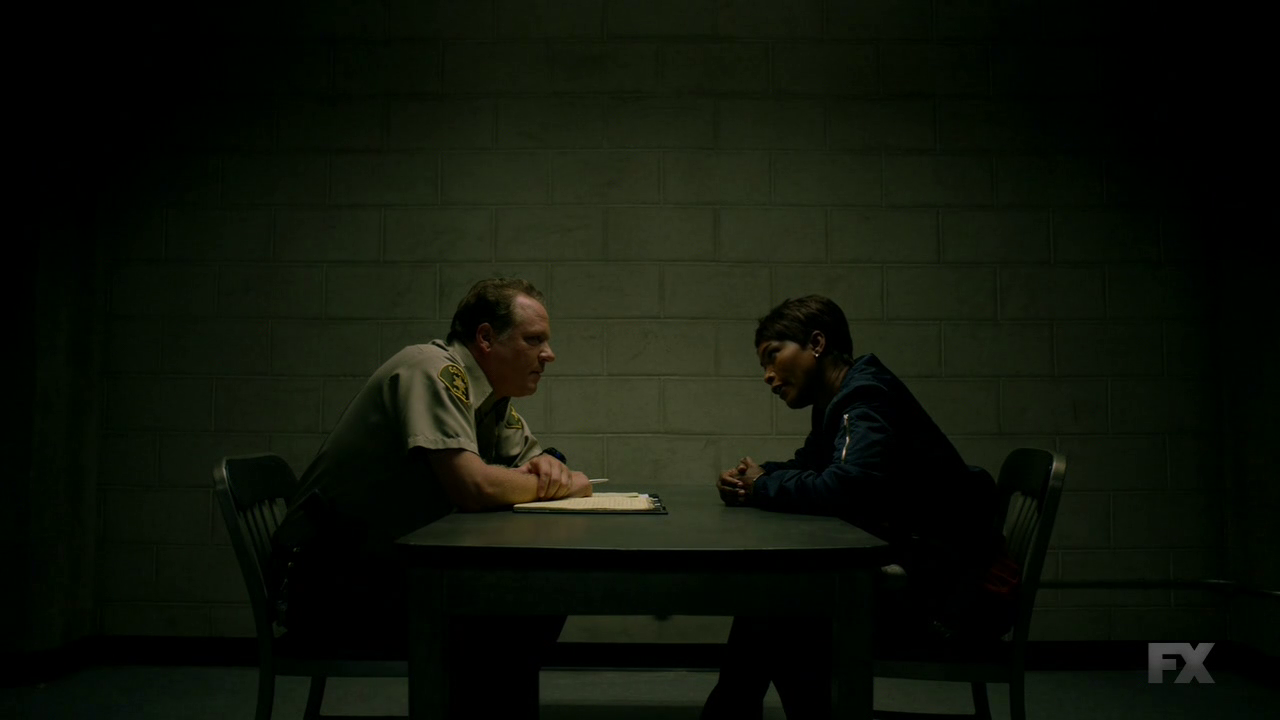 Lee was last seen being taken away by the cops. Did she kill Mason or didn’t she? I’m not sure this is going to be answered, since it seems like the paranormal documentary angle of this season is drawing to a close. Is it possible we will never get the answer to this? After forty-eight hours the cops release her, and she gets a ride back with the Sheriff. When he sees the torches and The Butcher’s people he leaves her and gets the hell out of there. The Butcher’s son Ambrose has never liked how his mother deals with things, and instead of letting her kill Flora, Ambrose grabs his mother and carries her into the fire, burning them both. It’s only because of Lee’s quick actions that Matt, Shelby, and Flora escape, never to go back to that cursed land.

It appears that the story we’ve been following has run its course and finished up what it started, but what happens next? In a lot of paranormal documentaries there are more than one story in the episode. Is it possible we may be entering into a second storyline told using the same conceit? Could My Roanoke Nightmare continue with another family? It would be pretty great if this were the case, and it would allow American Horror Story to fit two narratives into one season without it feeling strange or crammed in. It would also make much more sense than abandoning the paranormal documentary framing device halfway through the season. Would they tell another tale on the same land, but of a different family? Or would they use another well known television format to show us more history about the missing Roanoke colony? I’m not sure what to expect from the next chapter of this story, but I’m hoping that either way it remains as entertaining as the first half of this season has been.

For six months out of the year, Jeff is holed up in his home with nothing to do but shovel snow, watch television, write, and dream of warmer climates.
Follow Jeff on Twitter: @OfSoundnVision
Keep up with all of Jeff’s reviews here.