A group of teenage fans wander onto the grounds of the Roanoke house in AMERICAN HORROR STORY and find they’re favorite fiction to be entirely true. Soon they are witness to the power of the Blood Moon and find themselves part of the Roanoke Nightmare.

With Ambrose’s appearance on the doorstep dressed as the Pig Man at the end of the last episode, it adds another actor who could possibly be the last left alive. He showed up because he was instructed to show up at the house at that particular time. Sydney believed things may be winding down and they’d be able to use something to stir things up for the show he was planning. Instead Ambrose walks into a blood bath, and wants to immediately leave. He was a Navy Seal, so he has military skills that may be useful to find their way out of there, but will these skills be any match for the Polk family or the Roanoke followers?

The narrative for this season has been stretched well beyond plausibility at this time, making the season no longer entertaining. Instead it’s a chore to get through. The show runners have come up with every imaginable way you may could up with footage of the events that take place during Sydney’s attempt to recreate the ratings of the first season. They’ve used Big Brother style, Blair Witch, hand held devices, hillbilly’s using video camera’s, and now we get police body cameras and adventurous kids Go Pro’s. This found footage trope has been pushed as far as they could possibly take it, and in the process sucked all of the enjoyment out of the show.

There’s only so much shaky camera footage a person can take before it becomes unbearable, and American Horror Story: Roanoke has found that mark. I was along for the ride for the first half of the season, which I thought was entertaining and clever, but like Sydney, American Horror Story tried to wring as much entertainment as they could long after the concept had grown tired. There’s one episode left of the show, and to be truthful I have no idea what in the hell is left to do? Unless the entire last show is an investigative news report about what the authorities found after the Blood Moon was over. 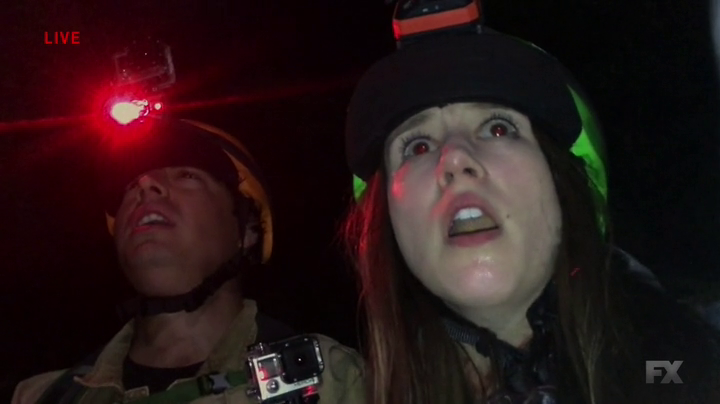 Three young fans of the show make their way to North Carolina to track down the house where the Roanoke story took place, but end up getting a lot more than they bargain for. They see ghosts, find dead bodies, are interrogated by cops when they report the dead producer they find, and then once released head back to the house to try and get more footage for their fan site. They have wandered into something they don’t understand, and will soon be victims of their own curiosity. 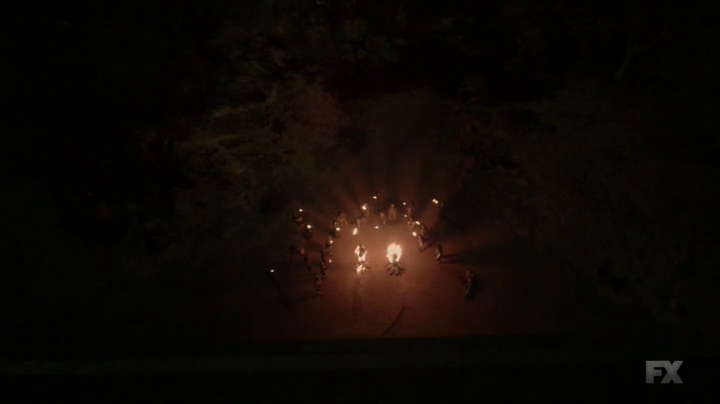 For Audrey, Lee, and now Ambrose the only way to freedom is to go back to the Polk’s farm and steal their truck. They may still be able to rescue Monet, but things go sideways when they attempt to make their escape. Audrey rescues Monet and kills one of the Polk men, but Ambrose is stabbed as he tries to steal the truck, and Lee doesn’t make it out of there as the Roanoke followers arrive with torches to get their blood sacrifice. Audrey and Monet head to the house, and Lee wanders off in the woods only to be rescued by the Witch of the Woods. She drinks what the Witch gives her and becomes like the Butcher, possessed by the need for a blood sacrifice. When the kids find her, they try to help, only Lee kills one of them on the spot leaving the other two to run in terror.

Lee makes her way into the house to finish what the Butcher started, but I don’t really understand her bewitchment. Has she taken the place of The Butcher, or is she another surrogate Butcher? It’s unclear since the real Butcher still shows up at the end of the episode, but hangs back. Lee seems to be in charge now. What does the Witch of the Woods get out of helping Lee? Is it another soul to add to her collection, or is it something bigger that spreads out from this place? Either way, when Lee shows back up at the house, she’s on a rampage. She kills Monet, and fights Audrey, but instead of killing her, Audrey is thrown down into the cellar and left for dead.

The Blood Sacrifice ends up being Ambrose, who is disemboweled, and the two fans of the show who are impaled and lit on fire. Supposedly the footage from the Go Pro’s the kids are wearing was immediately sent to the cloud and dispersed on their fan site where people contacted the authorities, which is why at the end of everything the police show up in force. The question still lingers though, who is the one person from the house that is left alive? It seems to be Lee, since the police find her passed out and in a daze, but Audrey climbs out of the cellar as well. The cops rush to help her, but the minute Audrey sees Lee she steals the cops gun. Before she can shoot Lee, the cops unload on her. Lee is the only surviving member of the house. 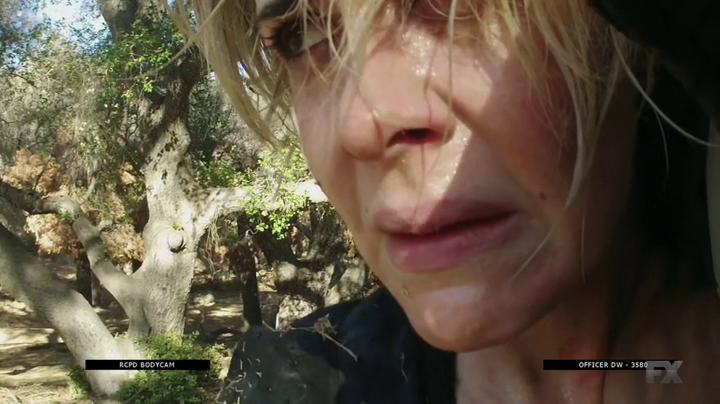 What happens next though? There’s still an hour of American Horror Story left, but what else is there to be explored? Everyone is dead except for Lee, so I can’t imagine whatever is planned for the finale being a fulfilling ending to the season. I might be wrong, but I doubt it. It’s too bad American Horror Story fell apart so badly in the second half of the season, because it had something good going at the beginning.