The real Butcher shows in this episode of AMERICAN HORROR STORY, stopping Agnes from continuing to slaughter in her name. The combination of found footage and Big Brother style reality show that made the last episode so interesting begins to wear thin, as characters begin dying right and left.

It’s incredible how quickly things begin to fall apart in this episode. The conceit of a return to Roanoke after the success of the first season of My Roanoke Nightmare was interesting to begin with. Get all of the actors and the real people who experienced the previous events into the house during the Blood Moon, set up cameras everywhere, and see what happens. What I liked about this reset on the season was that it mixed found footage, reality television fly on the wall cameras, and regular drama filming techniques. The mixture livened up Return to Roanoke: Three Days in Hell in a way that was interesting, but unfortunately the narrative hasn’t remained as exciting as the aesthetic. 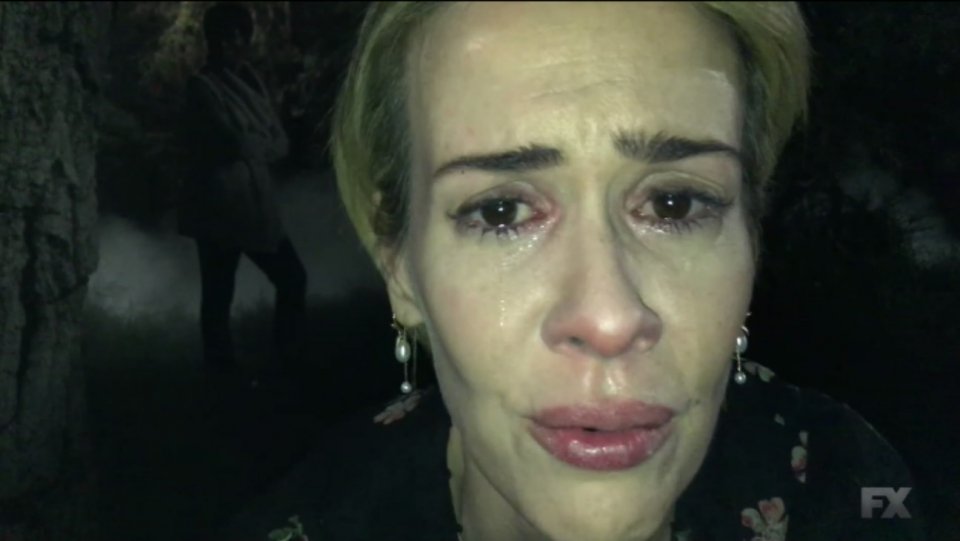 The problem I’ve had in the past with American Horror Story is that it gets far too campy and ridiculous. A little camp is fine, and has been with the series from the very first season, but there have been seasons that have been all camp, all the time (I’m looking at you Freak Show) and it just doesn’t work. Luckily this season has had very little camp, and so far none of the damn musical moments that turned American Horror Story into Rocky Horror Picture Show.   That doesn’t mean the narrative hasn’t been ridiculous at times. There was a moment while watching the second episode of this season where I thought, “here we go again” when the story became too unbelievable. Thankfully the season course corrected after that and got back on track, but this seventh episode takes a deep step into the same territory.

It was announced at the beginning of episode six in an inter-title that only one person in the house will survive the Blood Moon ordeal, but the pace with which the characters are being killed off is astounding. So much so that I have no idea how in the world they are going to keep things entertaining for the next three episodes unless there’s a huge twist and it was all just an elaborate hoax. I don’t really see that happening though. The last episode set up the world that Return to Roanoke inhabits, and we did see Rory murdered by the ghosts of the nurses, but other than Agnes losing her mind there wasn’t much going on other than tensions among the guests. Here all that tension unravels as Agnes picks off people right and left.

The producer Sidney is played as a real douche bag intent on manipulating everyone on the show in order to get the best ratings. He has no real feelings or humanity, which is abundantly clear when he messes with Agnes by getting a restraining order on her to keep her away from the set, only to giggle with delight when she shows up anyway. The only thing he cares about are ratings, so when one of the production staff screams from outside of the production trailer, and is found with her throat slashed and bleeding out, he yells for the cameraman to come and get it all on film. While he watches in awe, Agnes sneaks up and gives him two hard whacks of a butcher knife to his chest. After killing Sidney she also kills the cameraman. The show is now rudderless without any guiding hand or person who can rein things in. The problem is the production office is way out in the woods so it wouldn’t be a distraction for the guests in the house, and now since it is so far removed, they have no idea what’s happened to Sidney and his staff. 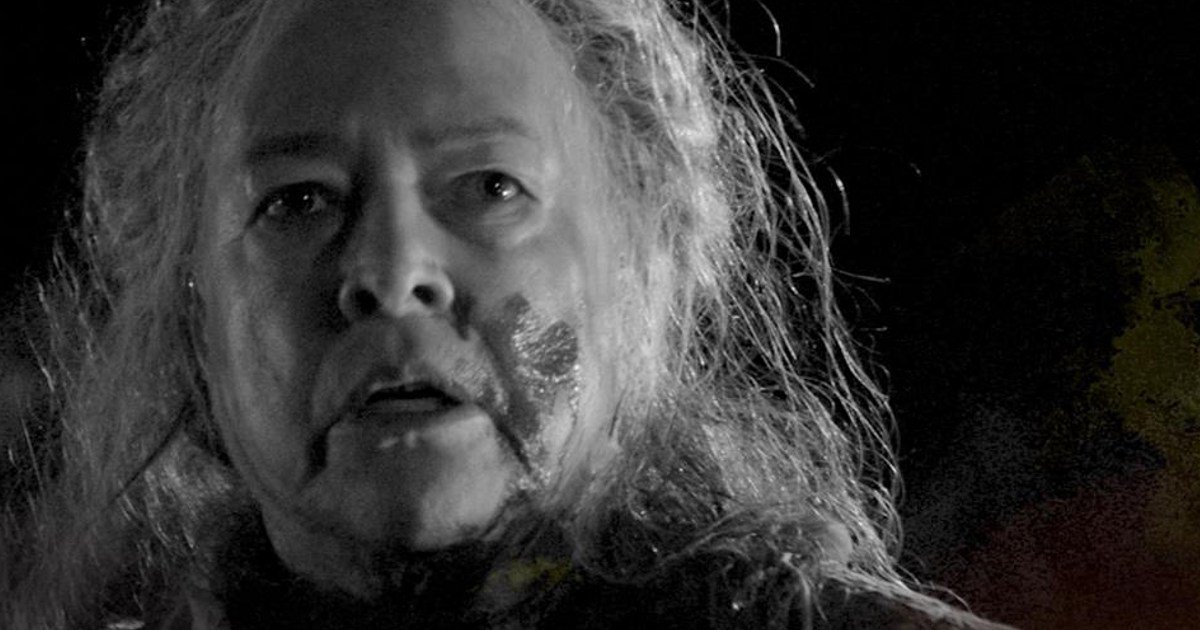 The absence of any one in charge leaves things to spiral out of control when Agnes ends up in the house. She hacks Shelby with her knife, but doesn’t kill her because Dominic comes to her rescue and fights off Agnes, who then disappears the moment Dominic turns his back on her. Is there something supernatural about Agnes? Is she really channeling The Butcher or is she just completely deluded? It’s hard to tell. She bounces back and forth between herself as Agnes and her role as The Butcher as if she has split personalities. When she does finally come face to face with the real Butcher at the end of the episode it’s clear it’s all been a psychotic act. The real Butcher has no time for her, and splits her head in two like a melon.

With Shelby injured, and Rory presumably dead, Lee take sit upon herself to go find the production office and get help. Audrey and Monet go with her, and when they find the production office in shambles, the crew dead, and the car out of commission they decide to walk to town for help. They get picked up by the cannibal hillbilly’s who make a meal out of Lee’s leg and make the other two women eat some of it. Is there any way for them to escape, or are all three of them going to become meals for those back woods, pot-growing degenerates? 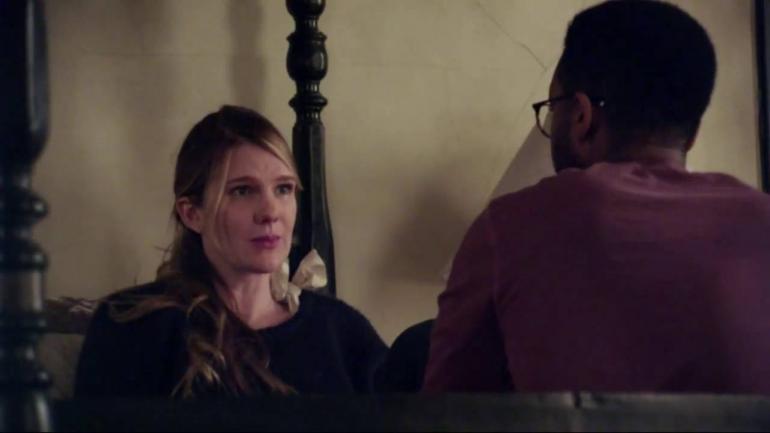 Shelby only came back to do the show so she could be with Matt, but things haven’t really gone the way she was hoping. Matt only came back so he could be with Lady Gaga’s Witch of the woods again. Dominic follows Matt into the basement where he has a rendezvous with the Witch, and then grabs Shelby to see what Matt is up to. This is the part that completely lost me as a viewer. When Matt tells Shelby he’s in love with the Witch, she grabs a crow bar and bashes Matt’s head in until he’s dead. I understand she’s angry and she had all of her hopes pinned on a reunion with Matt, but killing him seems completely out of character and just doesn’t work for me. There’s nothing in everything we’ve seen Shelby do that would make that turn of events make sense. This is the jump the shark moment in American Horror Story: Roanoke that I’m not sure the season can recover from.

With the real Butcher and her followers surrounding the house, is there any way out for Shelby and Dominic? As things stand they are the only people left either uncaptured or alive. Lee, Audrey, and Monet are prisoners of the hillbilly’s, and it’s possible that Lee is missing a leg. Can these five characters carry the rest of the series on their shoulders without some other twist that changes the entire dynamic of the show? We have three episodes to find out.