In the sixth installment of AMERICAN HORROR STORY, the show changes to explore the actors who portrayed the real characters lives after My Roanoke Nightmare aired, and the producer Sidney’s big idea to return to the house during a Blood Moon to film a follow up reality series.

American Horror Story: Roanoke has done something incredibly interesting with this season. The paranormal documentaries the show is based off of a lot of the time has two stories in one episode, and that’s what this season of American Horror Story does as well. Instead of another haunted house story, the show delves deeper into the world behind the documentary and follows the producer of My Roanoke Nightmare as he begins filming a new follow up show after the lives of the Miller’s turned out to be such a huge hit. Clearly things will not go as he intends, and the fun will be watching it all unravel. 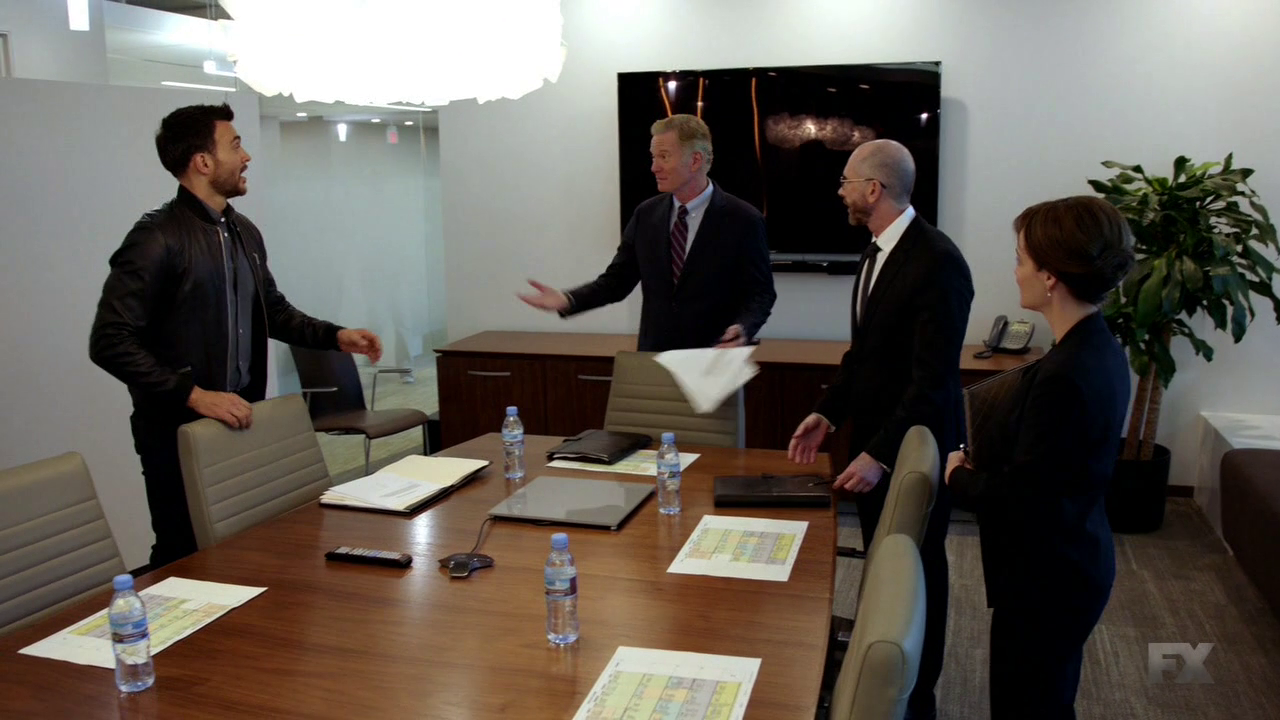 The first half of the show is shot in a behind the scenes style to show how Sydney is taking the essence of what made My Roanoke Nightmare a bigger draw than the NFL (according to the show), and exploiting it to cash in. Sidney is a sleazy man who manipulates people and their emotions because it will make great television. His idea is to gather the “real” people from the show and the actors who played them, and put them all in the house during a Blood Moon for a Big Brother style of reality show. Sidney owns the house after having bought it from the Millers, and he rigs it up with cameras to cover the entire place. What he doesn’t tell everyone he has return to the house is that the entire place is also setup by an FX man to do all of the things a haunted house is supposed to do. He wants to push their buttons because he doesn’t really believe in the Blood Moon curse stories, and thinks the entire thing will just make great television.

The awkward part of this show behind a show within a show kind of thing, is watching actors we know from outside American Horror Story playing actors who play real people. It’s like wandering into some kind of bizarro land where Kathy Bates, the multiple award-winning actor, is playing an actress named Agnes Winstead who has gone off the deep end after playing The Butcher in My Roanoke Nightmare. We learn this in interview style moments Sidney gathers together for his new show Return to Roanoke: Three Days in Hell. Agnes has gone off the deep end, and after playing The Butcher is unable to shake the character. She’s been arrested and mentally committed for wandering around Hollywood dressed as The Butcher carrying a butcher knife. Sidney uses her mental issues against her to issue her a restraining order against participating in the new show, in the hopes he touches a nerve that drives her crazy so she participates in the show. It’s diabolical on Sydney’s part, but Agnes falls for it and does exactly what he wanted. She shows up on the set of the new reality series and scares people. 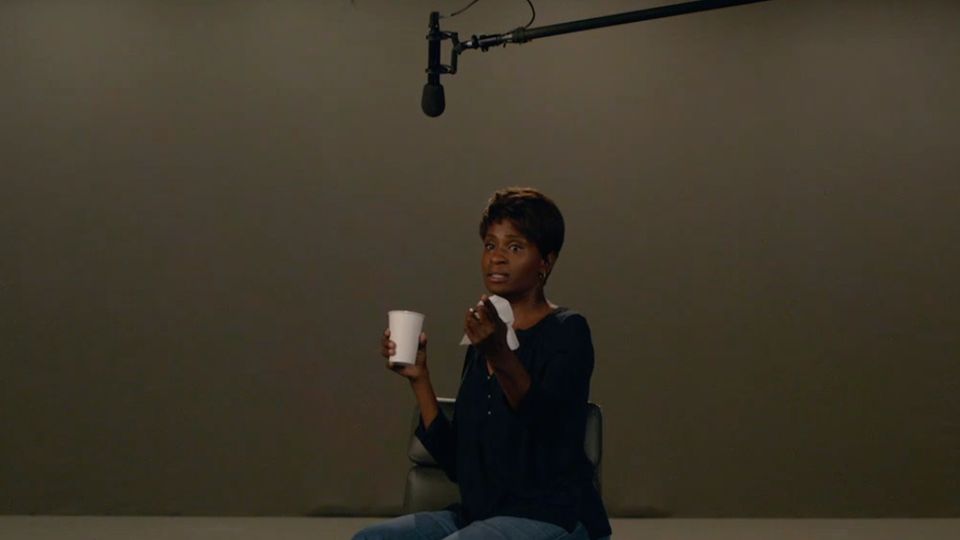 Not only does Sydney plan on throwing everyone together for the new reality show, but also he knows Shelby had a fling with the actor who played Matt while she and Matt were fighting, so he manipulates the situation to his advantage. Shelby only agrees to do the series for the chance of being locked up with Matt in the house in the hopes once they may be able to reconcile and rekindle their marriage. Sydney promises her the actor Dominic will not be a part of the show, but then surprises them by having him show up to rile up Matt and Shelby. American Horror Story does a wonderful job tackling reality television and the way it manipulates both the participants and the viewers. If you can watch Big Brother or the Bachelor and think the producers are not making every attempt to exploit the emotions of the participants for higher ratings, then you are deluding yourself.

Strange things begin to happen on Sydney’s new show. A crewmember accidentally decapitates himself while using a chainsaw to cut a fallen tree, and one of the producers quits the show after fighting with Sydney about it, is never seen from again. Her car is found, but her body disappears. We know she’s killed by the pig headed man, since they’ve shown us that, but an inter-title comes up to tell us that every member of the show dies except for one.   Return to Roanoke: Three Days in Hell never aired, what we’re seeing is supposedly reconstructed from the footage shot during the show. Is this another manipulation? Are we as viewers fed this fake fact in the hopes we let our guards down and believe the show, only to have it all have been special FX and actors? Did Return to Roanoke actually air and was it a success? Are there too many levels of reality for me to wrap my mind around? 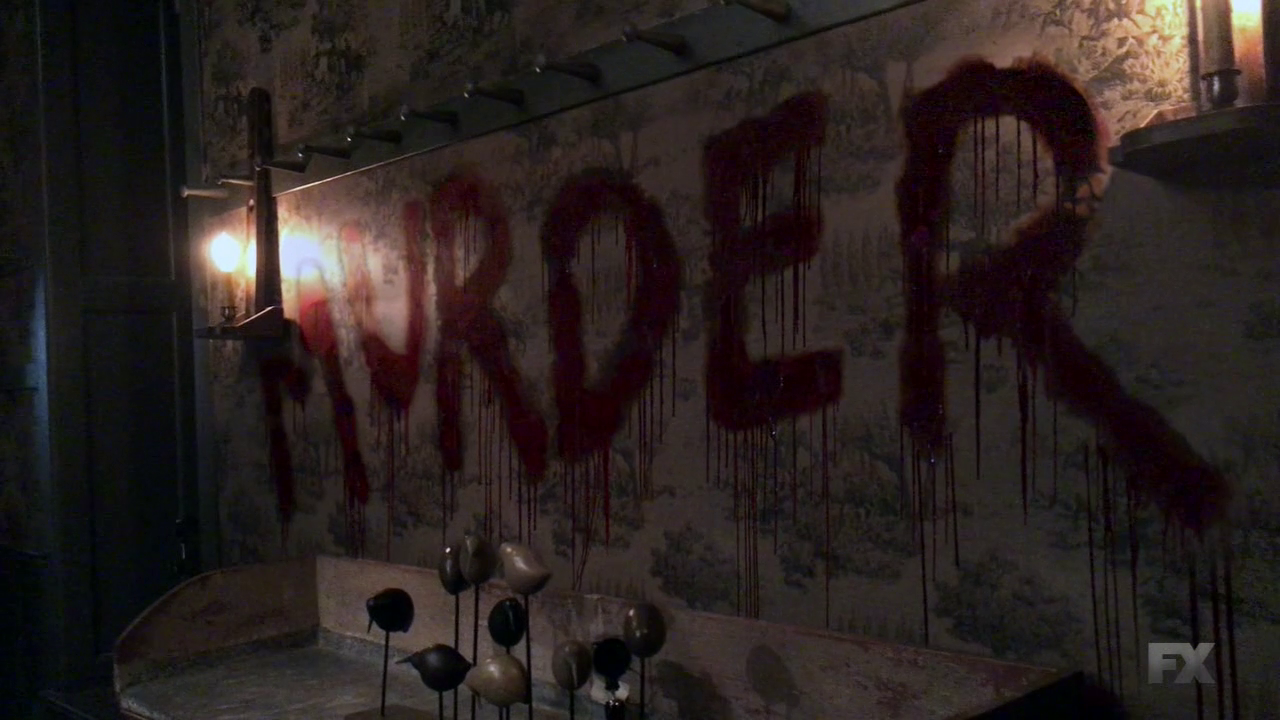 There are four episodes left, and if everyone dies except for one, who lives? The first death is Rory (Evan Peters) who played Edward Philipe Mott in the original show, when he looks for the pig headed man his wife saw in the bathroom. He’s murdered by the two nurses. Matt announces that the R in Murder stands for Rory, but is Matt the M, or is it Monet Tumusiime (Angela Bassett) who played Lee in the show? She’s been driven to become an alcoholic after portraying Lee, since everyone believes Lee murdered her husband Mason. Who will be next?

Sydney believes the Blood Moon curse isn’t real, but clearly things are leaning in that direction, and Matt and Shelby know what’s happening even though the actors seem to think nothing of it. Will the real Butcher and her followers show up, and will the hillbilly family come to help her sacrifice the blood of the participants of Return to Roanoke to keep the curse going? What other actors from the American Horror Story stable will show up as the curse runs its course? The real question for this season is whether it will end on a high or a low note. Time will tell.