In what may go down as one of the biggest missteps of squandered potential, AMERICAN HORROR STORY completely fizzles out in an attempt to be clever. Lee is villianized in the public in the aftermath of Return to Roanoke: Three Days in Hell, and attempts to rekindle whatever relationship she once had with Flora.

I can’t remember ever witnessing a television show start out so bold and strong and then completely nose dive in the same season destroying any good will it had garnered previously. Heroes did it over the course of several seasons, but there has to be some kind of award for burning out in ten episodes. If you go back and read my reviews, I thought the premise for the season being a paranormal documentary was a great angle to build the story around. There were all kinds of built in tropes that played well within the horror narrative, but it was clear at the mid-point of the season that American Horror Story had burned through whatever possibilities a paranormal documentary could sustain. At this point it would have been completely satisfying if, like many of these paranormal documentaries, a new story had taken over for the second half of the season. Shows like My Haunted House and Paranormal Witness do this all the time, and it would have fit better into what American Horror Story had built on than the route the show ended up taking instead.

I’m really not sure there was any real need to revisit the Roanoke house again since the entire story had already been told. The Return to Roanoke: Three Days in Hell sequence was just a complete rehash of what we’d been told and seen in the My Roanoke Nightmare sequence, so it played as a stale concept despite the attempt to set it in a Big Brother, fly on the wall style documentary. I’m not sure if they were attempting to roast reality television in this second half, but the only thing American Horror Story ended up roasting was itself. This reinvention couldn’t even last more than four episodes before it had completely exhausted its ability to tell a story any longer, which is why the season finale ends up becoming a hodge podge of sensationalist news and interview stories. 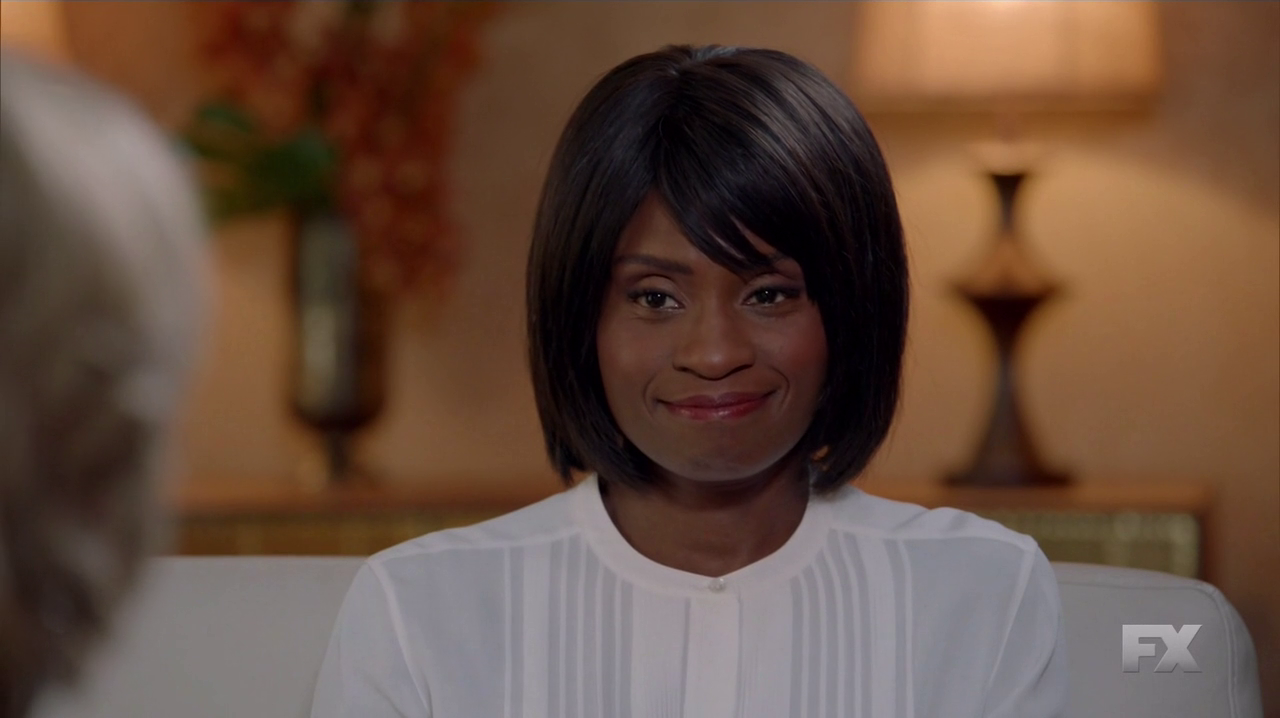 The last hour of American Horror Story takes place spread over numerous fake shows, YouTube videos, and breaking news events. It bounces from idea to idea to end itself, but completely runs out of steam before it gets there. It’s jam packed with media excerpts and begins with a Paley Center Q and A after the show is riding high on its first season ratings. A fan YouTube video explains right afterward that the second season was just as popular if not more so, but no one is sure if it was real or not. Did everyone on the show really die? It seems like it, since the next chunk of the episode shows all of the different ways attorneys tried to pin the deaths of the people on Return to Roanoke on Lee. When she’s acquitted, the same attorneys use her confession tape to hang the murder of her husband Mason on her as well. Flora is brought up as the witness to Lee’s killing of Mason, but Lee’s lawyer makes Flora look silly since she admits she was hiding in the woods with her ghost friend Priscilla when she witnessed the murder. Lee is acquitted again. 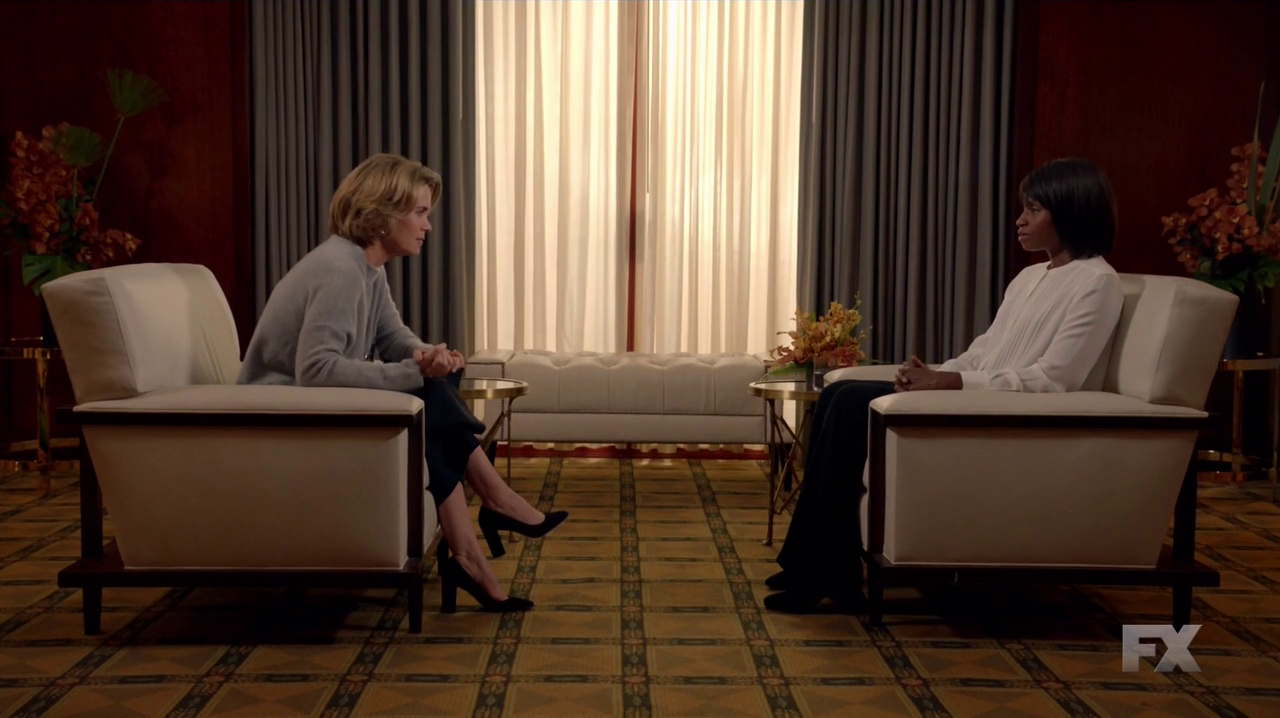 I’ve never understood American Horror Story’s need to link season’s and characters so it appears each season is part of a larger, connected universe. They did it twice this season that I’m aware of. The first is the Witch of the Woods played by Lady Gaga, who’s linked to season three’s witches from Coven, which sort of works because it doesn’t beat you over the head, but still who cares; The second is the return of investigative reporter Lana Winters from season two’s Asylum. Lana’s appearance seems to make no sense at all. Did it have to be Lana Winters who had the big interview of Lee? No. Lana comes out of retirement to interview Lee about the murder, but shockingly reveals Flora has gone missing an hour before the interview and blames Lee for her disappearance. Before Lee has a chance to really react, one of the last surviving members of the Polk family of hillbilly’s, Lot Polk, storms the set in a murderous rampage, but before he can kill Lee in revenge, police take him out. The only point of this entire sequence is to link past seasons to this one, and let the viewers know Flora is missing.

So we’ve seen a Paley Fest Q and A, YouTube videos, a show called Crack’d about Lee’s troubles, court broadcasts, The Lana Winters Special, and now we get to end with one final tip of the hat to paranormal investigation, Spirit Chasers. Spirit Chasers is an amalgamation of shows like Ghost Hunters mixed with the douchey personalities of investigators like Zak Bagans from Ghost Adventures. The idea is they investigate the Roanoke house during the Blood Moon, and guess what … everyone dies except Lee who randomly shows up to find Flora. Flora is there because she wants to die to protect Priscilla from The Butcher, but in what is supposed to be a heartfelt moment that falls flat, Lee sacrifices herself to keep Priscilla safe so Flora can live her life. The house goes up in flames just like the season did, and Lee joins the other ghosts to live forever as a trespasser on The Butchers land. 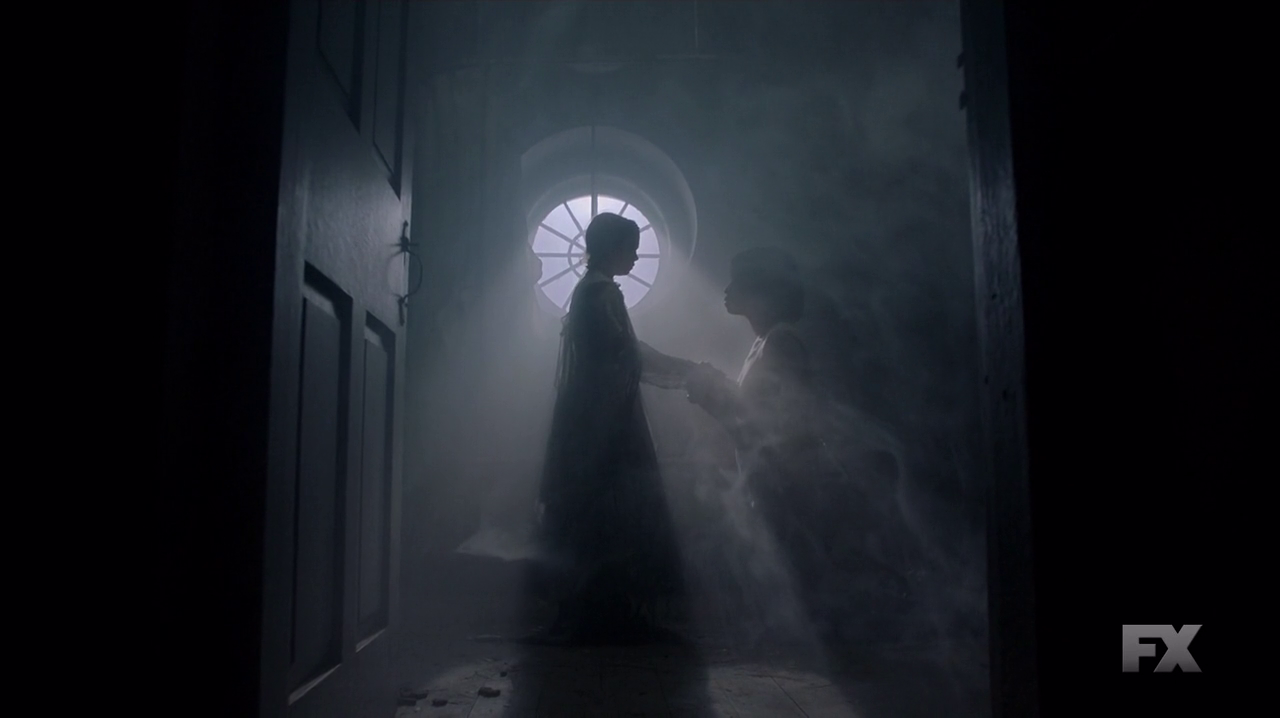 So ends the rise and staggering fall of season six’s American Horror Story: Roanoke. I mistakenly gave the show a chance after two previous disappointing seasons. The third time is the charm, so I’ll take that as my cue to cut American Horror Story out of my life. I’m done with it, and you should be too.