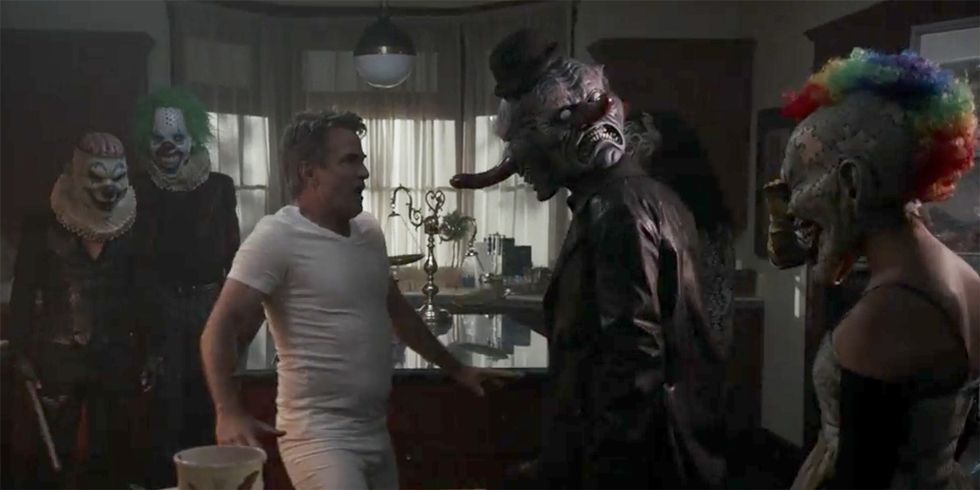 This week on Amerian Horror Story: Cult, we stayed in flashback mode, following Kai and his ever-expanding cronies to understand more of their inner workings. It starts to feel like somewhere along the way we crossed over to The Good Place by which I mean The Bad Place, because literally every character we’ve ever met except for Ally is in cahoots with Kai; it feels like the whole world we’ve seen has been staged to terrify Ally. It feels a little (okay, a LOT) ridiculous, since we’re not meeting anybody else, nor really seeing anybody else terrified with the exception of one woman during the teaser two weeks ago, and so while Kai is very clear about wanting to cause paranoia and terror all through the town… As far as we’ve seen, it really is just Ally.

The most surprising member of Kai’s group is Ivy, although we got hints of that last week. It’s still a little confusing that Winter is on board with Kai’s plan, although at least it explains her downright bizarre actions, and Ivy’s willingness to put up with it. One of the character points that’s hardest to swallow (by which I mean, I don’t buy it) is that it seems like Ivy isn’t totally comfortable with what she and Kai’s team are doing. When Ally calls her while being terrorized yet again (more on this later) and Ivy clearly feels some remorse, or sympathy. But we’re supposed to believe, since we’re in the past in this episode, that she went along with these incredibly elaborate plans to make Ally feel like she was crazy all along?

This isn’t passive cruelty. This is active, and complicated, and pre-meditated. People can be horrible, as we all well know, but I just have such a hard time swallowing this crew of people hopping on board with the insane clown posse. I genuinely don’t believe most people have the stomach for this. And it’s a horror series, I know — there’s going to be blood and torture and torment and so forth. And people in cults, particularly, do crazy stuff. This is so beyond, though. It makes what could be a very creepy premise with some theoretically scary beats completely ridiculous to me; it’s probably a personal thing, but I’m a HUGE baby when it comes to horror. I’m talking I don’t watch it because once I needed therapy afterwards, okay? And I don’t find American Horror Story scary at all, because I’m constantly like, “this is completely absurd.” I’m just not sure what the point of a scary show that isn’t scary and also doesn’t really do anything interesting story or character-wise is. Obviously, my personal preferences color this, but man. I don’t get the obsession.

Another crazy thing is the neck beard guy whose hand Kai cut off after Winter and Ivy handcuffed him in a basement. Why is this guy willing to work with Kai, who while capable of an inspirational speech or two, encouraged him to cut off his hand? Moreover, why would he be okay working with Kai and Winter, who held him hostage in the first place? This is nonsense. 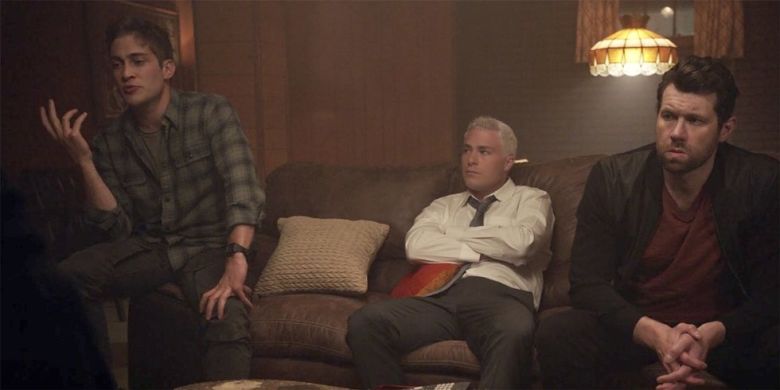 Revisiting Ally, we flashback with her as well. We see her at her house, spying on Harrison in his house and seeing him kiss Detective Colton Haynes. Thinking something else suspicious is going on, she crosses the street and finds Meadow begging for help, buried in a shallow grave in the backyard still alive. Ally runs home to call the police, but she gets put on hold. Instead she calls Ivy, and Ivy tells her to call the police. But while she’s on the phone with Ivy, Meadow runs to her window, pounding on it, begging to be let in… and spills the beans. She tells Ally that it’s a cult, and that everybody is in it, including Ivy. This is the most interesting part of the episode, because we’ve been past this point in the timeline — so going forward, once we reach the present, we know that Ally knows what’s going on. This is encouraging, because hopefully it means we’ll actually find somebody to root for in this whole mess.

Later, we see Kai and his crew as they escalate their terror, and some small dissension in the ranks. One of their members, a young dude, is definitely the weak link, which concerns Kai and Beverly. They ramp up to killing Beverly’s boss (side note: I just watched My Best Friend’s Wedding the other day and found the most upsetting part of this episode watching Dermot Mulroney be a bad person.) But they plan to film the murder, and chant some kind of satanic sounding spiel, to create greater terror when they share it.

When they attack him in his kitchen, he tries to beg for his life by saying there’ll be nobody to take care of “it.” He explains that there’s a “gimp” in his attack. I have honestly know idea of this is some colloquialism that I don’t understand and everybody else does, but seriously, what? They go upstairs and find a guy dangling from the ceiling, suspended by hooks through his skin (another ridiculous thing; a world in which everybody is ludicrously evil stops being shocking or difficult to watch after a while, and feels like a bit of a farce). They kill the “gimp”, but the young guy doesn’t want to, further cementing his fate. Ivy runs away and throws up, unable to handle it, putting her on risky footing as well.

In order to prove their fealty, Kai makes the whole team nail gun the weak link to death. Maybe I just have way more faith in humanity than the AHS team, but I think even when worrying for their own lives, most people wouldn’t be able to do something that slow, violent, and close up.

The other big reveal is that Ally’s therapist is Kai and Winter’s older brother. Beverly pressures Kai to tell her who he really is, accusing him of telling everybody what they want to hear, which is… definitely true. He tells her that his parents were alternately abusive and neglectful, and killed one another in a murder/suicide. In the interest of not losing all of the family’s money to taxes, Kai calls in his older brother, and they decide to lock their parents’ bodies in their room, covered in lye to prevent the smell, and let them decompose naturally and continue to collect their father’s disability checks, and live on their parents money. Kai cries at the end of this, but since Kai is generally not honest about anything, it seems likely this is another rouse to make Beverly feel like she has equal power when she doesn’t. 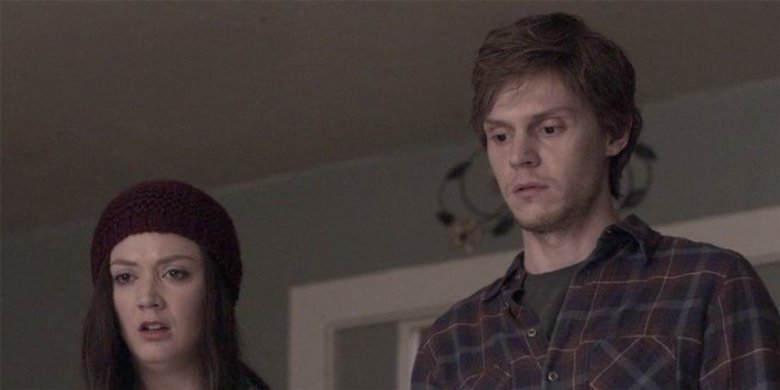 Hopefully, we’ll finally get back to the present next week, and will move forward with Ally now a little more in control of her world.