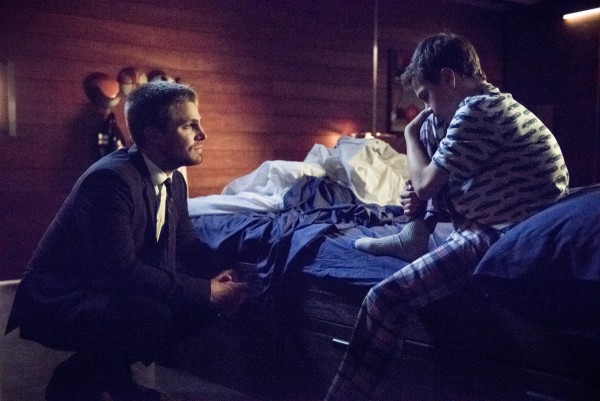 So did anyone actually think Team Arrow went out when Prometheus blew up Lian Yu while a helpless Oliver cradled his son from the distance? Season five of Arrow ended with one heck of a cliffhanger, but on some level we all knew Dig, Felicity, and Co. couldn’t go out that way. Really, the question was, how would the writers write themselves out of such a tough spot. Rather than say outright, season 6 begins five months later in a more familiar way, with the Green Arrow taking down a madman who targets a missile straight for Star City. Arrow stops the bad guy but the projectile still goes off. Uh oh.

But no worries, Curtis and his reliable t-spheres (which are coming a bit too convenient and all powerful for my liking) stop the missile in its tracks and cause it to explode in the sky! Curtis is the first of Team Arrow that we see unscathed and soon Felicity, Diggle, Dinah, and Rene join them. Five months later, almost everyone seems to be doing well. This structure is solid and allows us to make forward progress without dwelling too much on the past. 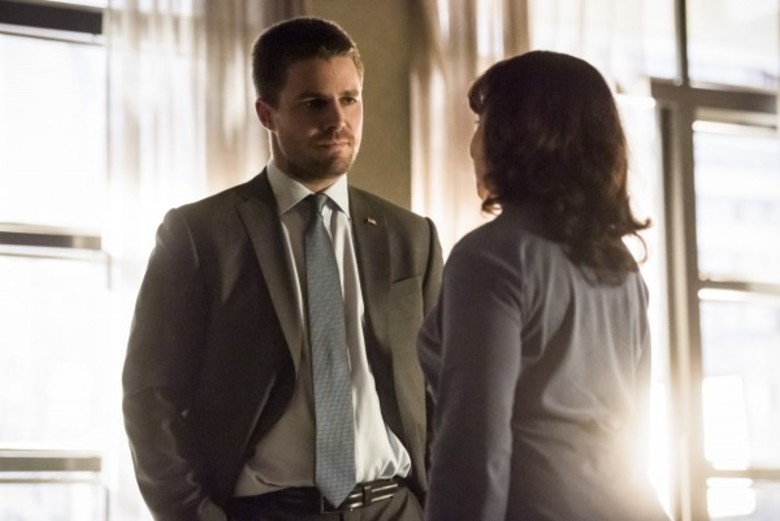 Speaking of the past, we flashback a few times to the island where Team Arrow scrambles to pick up the pieces after Prometheus sets off his explosives. Here, Arrow doesn’t dwell too much on “how” the team survived so much as what they do right after. One question mark — which remains so for most of the episode — is the fate of Thea. After the bomb, Oliver leaves his son William in a safe spot and scrambles to find the rest of his friends on Lian Yu.

Ollie runs into Slade Wilson who takes Oliver to a seemingly dead Thea. In the present, meanwhile, Thea is also nowhere to be found. Near the end of the episode, we finally find out that Oliver’s dear sister has been in a coma since the explosion. Oh man!

While Oliver is running around without knowing Thea’s fate, he also struggles connecting with his son William, who’s now living with Oliver. Plagued by nightmares of the past, we’re meant to think that memories of Prometheus are keeping him awake. But really, it’s Oliver that William doesn’t exactly trust yet. I have to say, I really enjoyed these scenes, because they really put Oliver on his heels. There’s just no easy solution here, and almost like Ollie’s own trauma on the island, it’s going to take time. I have to say I also loved the scenes between Slade and Oliver. A non-mirakuru-ed out Slade is almost like a father figure to Oliver, and Slade appears in both the past and the present to give some sage advice. 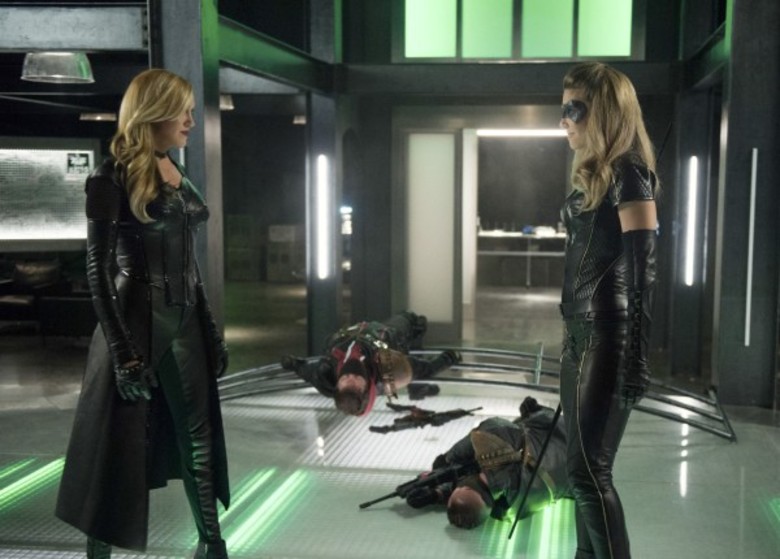 Most of the action in this week’s “Fallout” centers around villian Laurel (at this point, as well all know, we’re not talking about Lance’s lovely daughter) wreaking havoc on Star City. She’s angry because well– um — Quentin Lance shot her on the island and left her for dead. This Laurel blows up the city’s police headquarters and later comes after Team Arrow’s headquarters.

While Laurel’s motivation seems straightforward enough, Quentin Lance’s angst and emotional state is a bit harder to buy. Lance is back drinking again and Dinah and others have to remind him that this indeed is not Laurel and that taking her out isn’t exactly a tragedy. Last year, I mostly bought into Lance’s delusions, if you can call them that. But to be brooding and confused still now after Laurel aligned herself with Prometheus and now is wreaking havoc on Star City?! I’m just done with Lance and ready for him and the show to move on from this.

That said, it’s safe to assume Laurel won’t be the major villain of season six.  Oh, and by the way, someone at the end of the episode reveals to the media that Oliver Queen is the Green Arrow. So there’s that too.