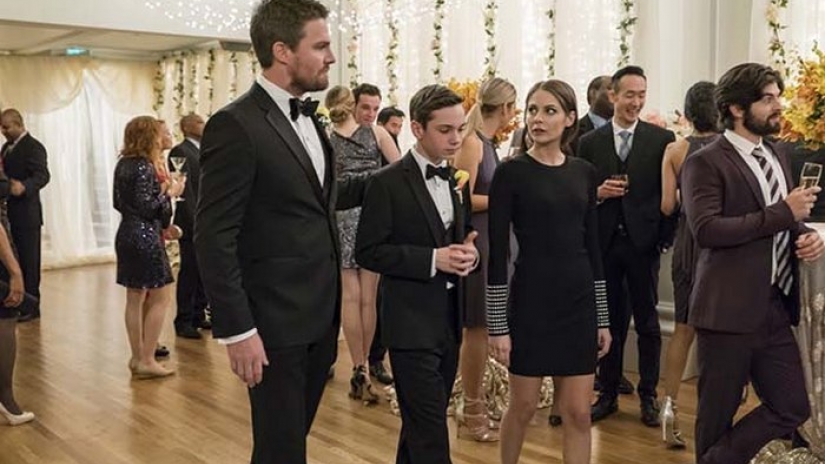 This week’s Arrow begins where last week’s crossover event ended. No, not with those Darned Dirty Nazi Doppelgängers from Earth X, but with an Olicity wedding reception. Remember, Diggle performed two weddings at the tail end of “Crisis on Earth X, Part 4”, marrying both Barry and Iris, as well as Oliver and Felicity. The moments probably stepped on each other, but luckily this week’s Arrow, “Irreconcilable Differences,” dedicates a solid chunk of time to making sure this huge event isn’t glossed over. There’s old friends. Cake. Booze. A flower toss that Curtis wins and then the drunken speech of his we all have to endure after. Here’s to hoping the marriage goes better this time around.

Eventually the fun is broken up, with Lance telling Oliver that the prosecution has a witness who is willing to testify against Oliver. Oh, and it’s someone on the team. Ollie quickly gets Felicity to set up surveillance on the team and for a time all signs point to Dinah, who’s been a bit mysterious in recent weeks, reconnecting with Vigilante aka her former partner. What’s frustrating here is Oliver’s lack of ambivalence about spying on his friends and allies. Sure, I get that he would definitely trust Felicity and Diggle (likely in that order), but immediately going into “everyone else is suspect mode?”

It also feels sloppy in that we have a character in FBI Agent Samantha Watson, who could have been used to gradually make Oliver get his house in order and maybe start keeping watch on the team. Instead, this all happens rather abruptly. 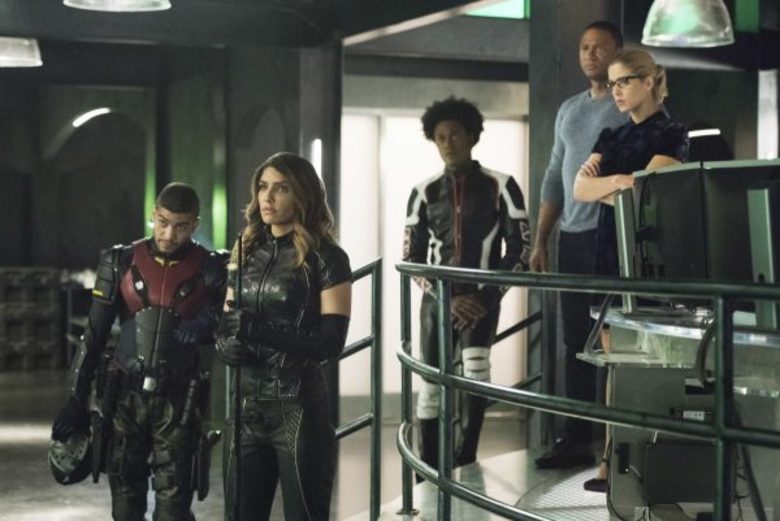 On the other hand, I like the fact that the show is drawing attention to the major characters it imposed in post-Laurel Arrow. The fact of the matter is, while Dinah, Rene, and Curtis have become trusted and valuable members of the revamped Team Arrow, they still don’t have the history that Oliver has with Dig and Felicity, and had with Laurel. Still, I would’ve liked to have had more of a gradual build and set up here. Naturally, Dinah quits the team after she’s wrongly dubbed as disloyal. Rene is axed (he was the rat, by the way) and Curtis resigns.

Again, all of this could work in theory. It’s also consistent with Arrow Season 6’s focus on relationships. Rather that Oliver’s undoing being driven by some external force (though it technically is as I’ll explain) it’s being driven by something internal. I just felt it was too abrupt. What’s more, Oliver doesn’t seem too shaken up about it. This was totally weird. If he doesn’t care all that much, why should we?

With the team in various stages of decay, Green Arrow also has to contend with Black Siren and Cayden James kidnapping Quentin Lance. I’ve often felt that Black Siren was little more than hired muscle, a mercenary with little to say for herself. I’m talking about, ya know, character motivation. For a time, the show got away with the vague drama of Black Siren looking like Laurel. But while we often knew how that made people like Lance and Ollie feel, we had little insight about how she felt about all of this temporal weirdness. She was just– “evil.”

The good news is, we finally get some of that. As Cayden James barks orders at Black Siren, she doesn’t always listen to them. She confides in Lance and wonders what her life would be like if she grew up as Laurel did. Later, when James tells Black Siren to kill Lance, she lets him free and disappears before Green Arrow can get to her.

The episode ends in typical midseason fashion with a big reveal, only it doesn’t pack the punch it should. We find out that Black Siren installed surveillance equipment of her own months ago in Team Arrow headquarters. She, James, Vigilante, and Anatoly (surprise!) watch from their own hideout as Ollie is left alone with Felicity and Diggle as the rest of Team Arrow disbands. Stay tuned til January!