In front of and behind the cameras, the Starz Bruce Campbell cult horror comedy series Ash vs Evil Dead has undergone some transformations in season three. Gone without a trace is recurring love interest Linda Emery (Michelle Hurd), a relatively humorless figure at odds tonally with some of the other series regulars in season two, but a big emotional component of the proceedings nevertheless. Through the ten-episode third season’s first five episodes, at least, Linda nor her daughter Lacey (Pepi Sonuga) are never even mentioned. Gone from showrunner duties (but still present as a “consultant”) is Craig DiGregorio, who butted heads with producer Rob Tapert, and claims that Tapert had serious reservations with Ash’s battle with a demonically possessed cadaver colon in a morgue last season — probably the highlight scene of the show’s second season.

Ash opens a hardware store/sex emporium with a hilariously note-perfect ad campaign. The first episode runs through a boatload of exposition at a breakneck speed, to the point where seemingly key new figures strive to stress long-term relationships with our heroes that are wholly unfounded. At one point, a woman gets a call from her daughter, a student at Elk Grove High School, who is being beset by demonic forces, and irritably walks up to Ash, who has been across the street hyping his new hardware store. She berates him and requests that he help her pick up their daughter from school. When he asks her identity (a fair question), she huffs that she’s his wife. Eventually, we find out that they drunkenly got married 18 years ago and consummated the nuptials in the back seat of his ancient Delta.

Candace Barr (Katrina Hobbs), the wife in question, does not seem to elaborate on the fact that they share a daughter – she apparently failed to mention this for 17 years, and never made any effort to annul the marriage or remarry. She at one point confesses to the kid that she was ashamed “Ashy Slashy” was her daughter’s pops, but it’s a shoddy explicative work-around. Why did she never tell Ash he had a kid? Why did she allow herself to remain technically betrothed to him for all these years, when it appears they never spoke after their one-night-stand/marriage? Why is she mad when he doesn’t recognize her, and why is she mad again when he doesn’t know they have a child together, when she didn’t stay in touch and never told him about the progeny? I realize that AVED isn’t known for airtight narratives, but this plot thread felt particularly unbelievable. All we needed for the daughter storyline to work was for Candace Barr to approach Ash tentatively, guiltily, explaining that she had kept the existence of their daughter, Brandy (Arielle Carver-O’Neill), a secret from him because she was ashamed of him. But for her to act like an irate sitcom wife out of the blue made absolutely no sense. He had literally done nothing wrong. This honestly was my biggest narrative sticking point with the entire series to date.

Those of you who watched season two of AVED will take it as no surprise that the evil, blonde-haired Ruby has returned, and she has none of the winsome morality of the contemporary, pink-haired season two vintage. She is the prime Big Bad of season three. I do find myself missing Baal, played by the scenery-chewing Joel Tobeck in season two. Sure, he died at the end of season two, but I mean, so did Ruby. Lucy Lawless is a lot of fun here, but it’d be nice to see her play off a sinister cohort again. 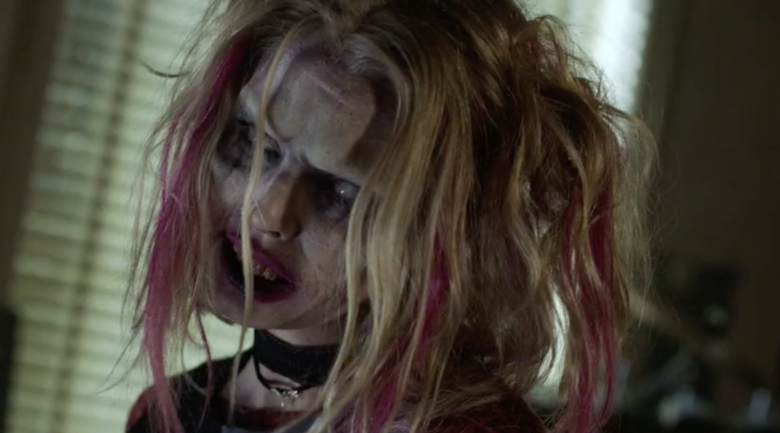 In a new narrative wrinkle, Ruby’s mischief this time around centers around vanquishing “Ash’s seed.” Because episode one, “Family,” already debuted last night, I’m free to divulge that part (but not all) of that roster includes Ash Williams’ trouble-making, mildly racist high school senior daughter, Brandy (Arielle Carver-O’Neill). Brandy does not comprise all of the familial surprises in store for you this season, dear viewer. My favorite moment from yesterday’s debut episode (which, again, I’m assuming you’ve all seen by now), teased in some of the new season’s advertising materials, transpires when school mascot Cougie the Cougar is overtaken by demonic forces and starts bleeding out of his eyes. This, plus a wacky band-room battle with a Harley Quinn doppelganger (Ellie Gall), ranks among the highlights of the entire series run to this point. My hope is that Ash can at some point face a whole boatload of possessed high school mascots from several adjoining school districts before the show resolves.

As things proceed this season, we meet a few generic new “friends” that any veteran of the Evil Dead series will astutely recognize as Deadite bait, much like the red shirt cadets in Star Trek. Part of the reason Ash has a daughter in this new season is an abandoned season 2 finale set-up advocated for by ex-showrunner DiGregorio. In that iteration, though, Kelly would retroactively become Ash’s daughter due to some time-traveling shenanigans. Here, though the establishment of the relationship between Ash and his daughter’s mother feels incredibly convoluted and slapdash, the existence of his just having a surprise daughter from a one-night-stand feels like a cleaner path to creating his new paternal side. 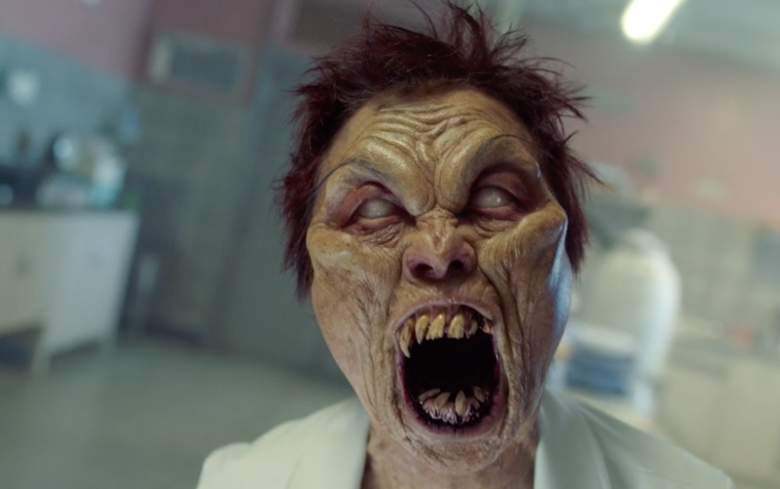 In a nice, weirdly tame break from some of the crazy action, we get a post-dead character who can only be described as… Casper-esque in his disposition (i.e. a friendly ghost). Kelly and Pablo’s relationship continues to deepen as Pablo battles the demonic forces that have plagued his body off and on since the end of AVED‘s inaugural season. Ash’s overtures towards a father-daughter bond with Brandy are hindered by Ruby in some unexpected ways. Ruby has a few additional tricks up her own sleeve, too, including one particularly adorable antagonist with one particularly adorable miniature appendage. But, per the wishes of Starz, I will divulge no more.

Beyond a few bumpy expository moments, as a whole Ash vs Evil Dead, season three, really moves. I would still love to see Ash and Co. get beyond the confines of Elk Grove and really have some fun facing off against Deadites in new locales and historical timelines. That said, I can’t resist Campbell’s Ash, Ray Santiago’s Pablo, or Dana DeLorenzo’s Kelly. I could watch that core triumvirate battle evil while cracking wise just about anywhere. All the show’s technical elements are top-notch as always — the make-up effects, dexterous camerawork, and choice classic music cuts stay efficiently on-brand. Ash vs Evil Dead remains killer entertainment, and well worth any horror buff’s time.

Ash Vs Evil Dead airs Sundays at 8PM on Starz