Well shoot. FX’s minor-key Donald Glover passion project ATLANTA is giving me whiplash with its qualitative spikes and dips. Last week’s episode, “The Streisand Effect,” was interminably bad, a meandering and joyless mess. The episode preceding that, however — called “Go For Broke” — was hilarious and relatable and wholly unlike anything I’ve seen on television before. This week’s episode, “Nobody Beats The Biebs,” doesn’t extract the belly laughs that “Go For Broke” did, but it again gives us an opportunity to watch Donald Glover and his brother Stephen (credited as the sole writer here) give us something totally fresh. Prior to “Nobody Beats The Biebs,” this critic couldn’t quite reconcile the show’s seemingly divergent lead characters: Earn Marks (Donald Glover), the frustrated would-be musician, and Al “Paper Boi” Miles (Brian Tyree Henry), his drug-dealing rapper cousin making small waves in the local hip-hop underground scene. Earn was in a weirdly lyrical and self-effacing comedy, and Al kept trying to tug the proceedings towards a darkly comic crime drama that wasn’t particularly funny. Even “Go For Broke” struggled to make the Al portion of the story work, but that was fixed by splitting the ratio of the stories to something like 80:20 in favor of Earn. But now, five episodes in, I am very happy to report that “Biebs” finally cracked Atlanta‘s Al problem!

Al’s two signature moods thus far are his (literally) quick-trigger anger and his various shades of apathy. In prior moments, Al’s outbursts seemed to go too far, too fast. The rest of the time, he seemed so passive about potentially big moments in his life and career that it was hard for me to care, since he so clearly didn’t. In “The Biebs,” though his anger is totally justified, and I was right there with him. Because the target of his anger was Justin Bieber (Austin Crute) — who, by the way, in the world of the show, is black. And just as annoying the white version. 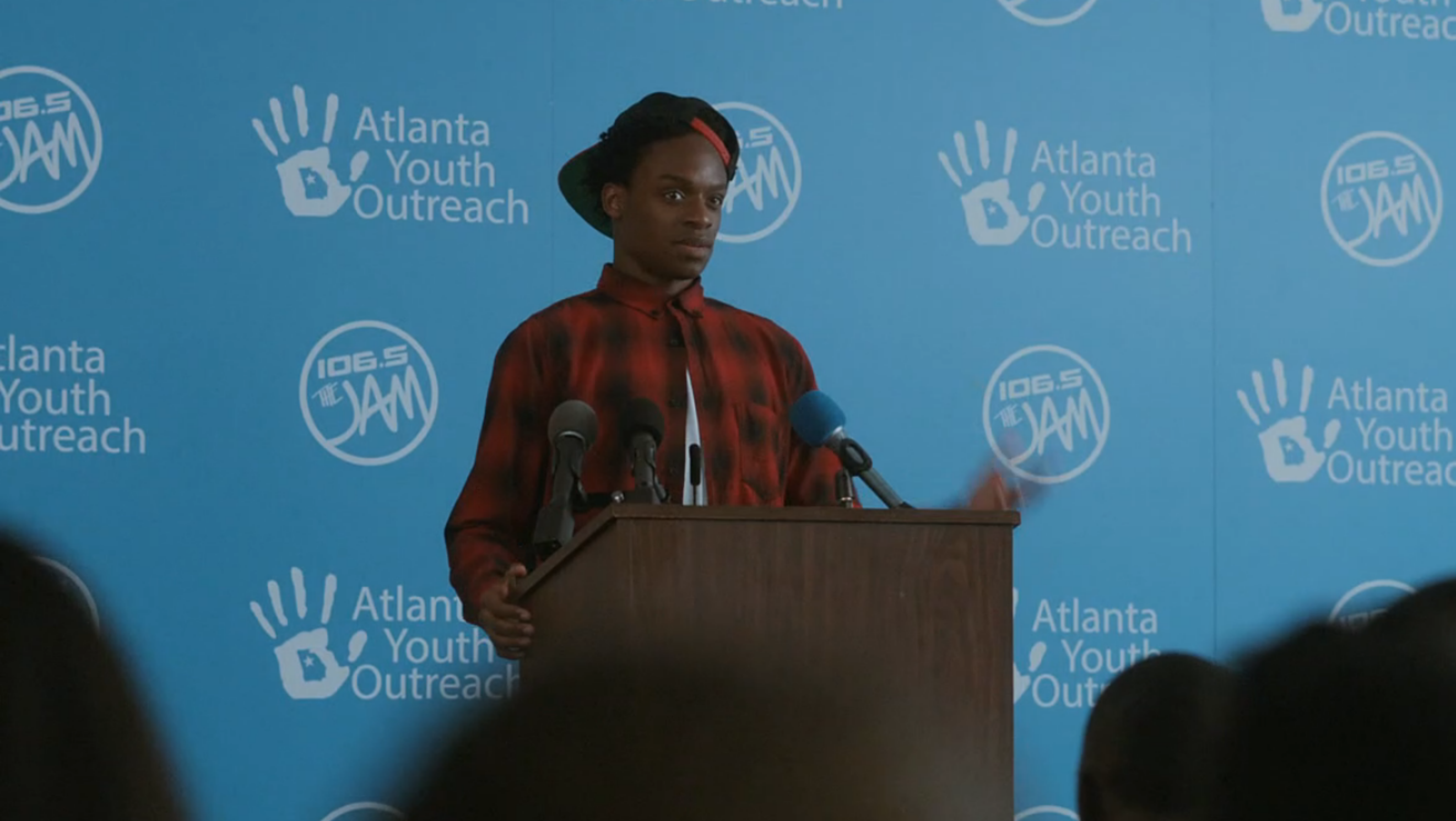 The A-plot of “Nobody Beats The Biebs” surrounds the cousins’ ill-fated adventures at a celebrity pick-up basketball game, for a local children’s charity. Black Bieber’s on- and off-court shenanigans irritate the smack out of Al at a celebrity basketball game — at one point, he pressures the former Urkel, Jaleel White in a micro-cameo, into swapping defensive assignments just so he can maliciously block the kid’s jumpers. Meanwhile, Earn accidentally schmoozes his way into a mixer for the event’s attendant managers and agents, and things get surprisingly uncomfortable in a hurry. The discomfort doesn’t just stem from Earn’s being at the mixer under somewhat false pretenses (you’ll have to watch the show to see what I mean) — it stems from a character development moment that totally blindsided me (and Earn). It was a great twist to get the audience out of a tired sitcom trope (our hero prevaricating their way into a weird scenario that quickly becomes unwieldy as the credibility of their deceit is strained). In the episode’s random Darius (Keith Stanfield) B-plot, our mumbling philosopher thinks it’s a good idea to pummel bullets into a dog poster target at a shooting range. My interest in Darius and Al has waffled throughout the show’s run, and this synopsis on paper could easily have turned into an extended, unfunny one-note riff. But it doesn’t. The initial set-up and reveal of the dog poster is handled deftly, without the clunkiness of prior Darius bits, like, say, his rambling Steve McQueen joke from “The Streisand Effect.” The dog poster bit doesn’t just stop with the reveal, though. Rather, it blossoms into a meditation on race relations and the bizarre paradoxes of Southern civility. The show is angry: angry at the music industry and all its sycophants, hangers-on and peripheral self-worshipping personalities; angry at the racist and violent underbelly that mars much of this country; angry at the way creativity is stifled by nagging real-world constraints (domesticity, finances). The show is also scared of all those elements. Al is that anger, and Earn is that fear. “Nobody Beats The Biebs” crystallized that quite succinctly, and I was right there with both of them all the way. There’s a great moment late into the proceedings, where an entertainment TV reporter, Valencia Joyner (Paloma Guzman) condescendingly explains to Al that, as a rapper, he should be “the asshole” in his Bieber feud, even though Bieber was clearly the instigating jerk. The end of this interaction is at once hilarious and infuriating in equal measure: it’s an over-the-shoulder shot of Al and Valencia Joyner as they both look to the stage, where Justin Bieber is introducing his new single with two hot background dancers. The upper half of the reporter’s body starts gyrating with obnoxious enthusiasm as she makes her way closer to the action. It’s a perfect moment — Al is almost paralyzed with rage, and so are we. The whole operation feels so unjust, and that Justin Bieber song is so damn horrible.

With “Nobody Beats The Biebs,” Atlanta‘s inaugural season may have finally struck the balance it has so long been seeking throughout an uneven first half. It has focused and distilled its anger, and it has honed its poignant and strange comic touch. Here’s hoping it stays the course down the home stretch.