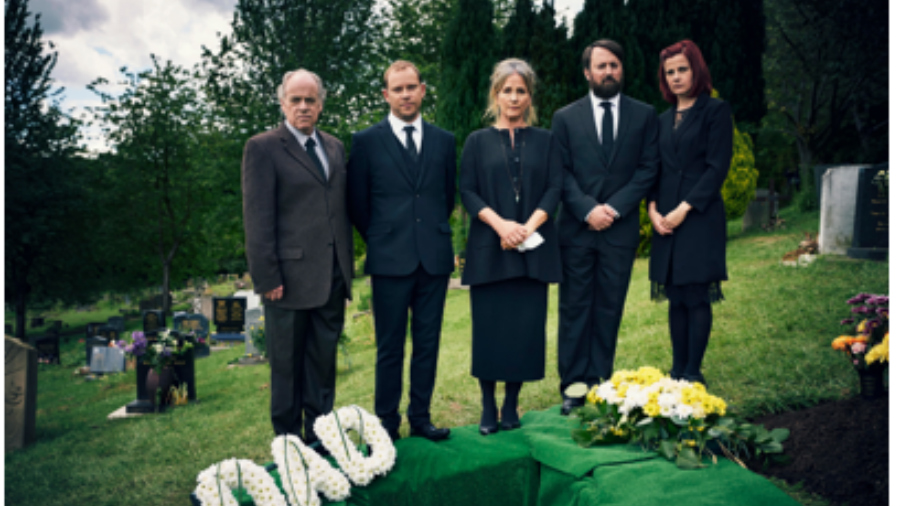 Quintessential British comedy–and much British narrative, in fact–makes you side with someone who’s actually pretty terrible, as long as they’re (seemingly) honest, imperfect, and unapologetically themselves. If the character’s relatable, the formula works, even if that character is also highly unlikable. Stephen (David Mitchell) is the prototypical unlikable protagonist who still steals our sympathies: unassuming, socially tone-deaf, selfish, often antagonizing, constantly trying to prove himself. After his father dies of cancer, Stephen returns home to take on what he feels is his earned role: the rights to the family business, a humble pub named John Barleycorn in a small town nestled in the British countryside.

Little does he know that there’s someone ready to usurp that “throne” before he even lands foot back in his hometown. Andrew (Robert Webb) literally flies in from a foreign country; he offers some translation services to a stranger on board, in fact. We know, from the outset, that he’s smooth–but we don’t know much else. It’s revealed to us that as boys, he and Stephen were “brothers” for a few months–Andrew was a foster brother, passing through. Now, he’s acting as if he’s a blood relative, and a “superior brother” in nearly every way. Andrew has the power play down to an art, constantly undercutting and undermining Stephen, and it’s gradually boiling Stephen’s blood. Stephen is also remarkably bad at keeping his frustration hidden, so he digs his own hole even deeper. It also doesn’t help that his family steps on him and gloms onto Andrew with adoration – particularly Cass (Louise Brealey), who happens to be crushing pretty hard on her former “brother.”

Of course, Stephen’s ideas to reinvent the business with new models are admittedly terrible. A field of food caravans is all he can come up with; meanwhile, Andrew quickly presents, plans and executes an entire fair in the same field, replete with hipster cheese vendors, face painting, and rides.

At various other junctures, Stephen makes horrendously poor judgment calls–e.g. realizing he’s not renewed insurance for the bar as he and the family watch it go up in flames. Not only is he consistently trying to force unworkable situations to work, he’s remarkably unaware of his socially inept outbursts’ effect on how others see him (saying, for example,“That is my dead body!” on a dead body he discovers in a forest, or gleefully shouting “He maimed a child!” in a library full of people looking on in horror). His only ally in the family is his ex-wife, played by Olivia Poulet, who embodies sweetness and empathy. Everyone else in his family seems to wish he wasn’t there, and has nothing much to offer except condescending comments and pitiful glances.

And yet, we’re on his team (“Team Us,” as his ex calls it). Stephens knows it, and we too feel there’s something just not right about Andrew, who seems more con artist than genuine guy. Webb plays the “too-good-to-be-true” role with perfection–his natural boyish good looks, his presentation of kindness and humility with an air of smugness, his obnoxiously dense cultural literacy, his undeniable charm. None of it seems truly trustworthy. Yet pinning something bad on him to smear his image proves to be extremely difficult – and adds an unexpectedly strong intrigue to every episode. Who is he, really, and when will we discover his true intentions? Some holes in one of Andrew’s stories about his absence from the grid for 18 months seem legitimate–but the holes are left there, tantalizing us to consider possibilities of potential collusion between Andrew and a sexy French cook named Juliet. It’s unclear if Juliet is a part of Andrew’s long con, or if Stephen will ever be able to “catch” his foe.

Back’s writers are adept at creating a curious game of Whac-a-Mole in this storyline, which, along with the quick-paced and well-executed humor, maintains a level of interest that encourages a binge session. While its snappy style clearly borrows from American sitcoms, the glibby, uncomfortably hilarious jokes-within-dialogues feel influenced by painful-to-watch British sitcoms like The Office. Another notable performance came from obnoxious, immature Cass (Louise Brealey), whose emotional immaturity is particularly grating. Everyone in the family, indeed, conveys just the right amount of measured sadness about Dad’s death, along with total incompetence that enables us to laugh and point fingers at them.

There were, however, a few techniques that seemed overused, even though their intentions seemed clear. At specific moments, typically when the characters of Stephen or Andrew are feeling vulnerable, they suddenly picture each other as boys (played convincingly by young actors). Sharp, seamless editing helps it to work well the first couple of uses, demonstrating to how being back at home and around family makes the characters snap back to those memories, feelings, and roles. Yet, as with most devices used too often, it gets a bit worse for wear, seeming less intentional and more like a crutch every time it’s utilized.

With both effortlessness and bite, not to mention an ability to make us truly invest in an underdog’s success, Back is just as worthy of another season as Stephen is to be vindicated–or will he ever be?