Better Things lets me peer into the way a rich, LA mom disciplines her kids.  It’s laughable and admirable because I don’t know whether Pamela Adlon really treats her kids like this in real life.  I assume she does, but Thursday’s episode makes me question that because it’s soooooo different from my experience.

At a gala where Sam is scheduled to speak, Frankie decides to tell her mom that she is surprised that she has not been shelved yet, with the whole over 50-thing and all.  She goes on to say that when she finally realizes that no one will hire her, she can consider being the person who separates dung from whatever to make fertilizer.

Sam stares blankly at her as she goes on and on about this.  And Frankie comes up with more equally poopy career changes.  And Sam continues to stare at her.

Sam is called up to speak, and as she rises, she dumps cake on her daughter’s pearl-colored dress.

If I were Frankie, I wouldn’t have gotten cake thrown on me.  I would have been missing a whole mouth.  And it’s not that my mom would have popped me.  She would have been able to cast an immediate spell, and voila! No more mouth.

But Frankie, the quintessential a-hole teenager, acts like it’s the new look.  She continues to talk crap to her mom, saying that she bets Sam was the type of gal who gave “gifts” at bar mitzvahs (oh yeah, they were are a bar mitzvah).  And then Sam, in front of Frankie’s friend, pours a pitcher of water down the back of her dress.

Frankie acts like it doesn’t bother her, so she continues talking to her friend, a boy who I assume she wanted to “gift”, as if nothing happened. 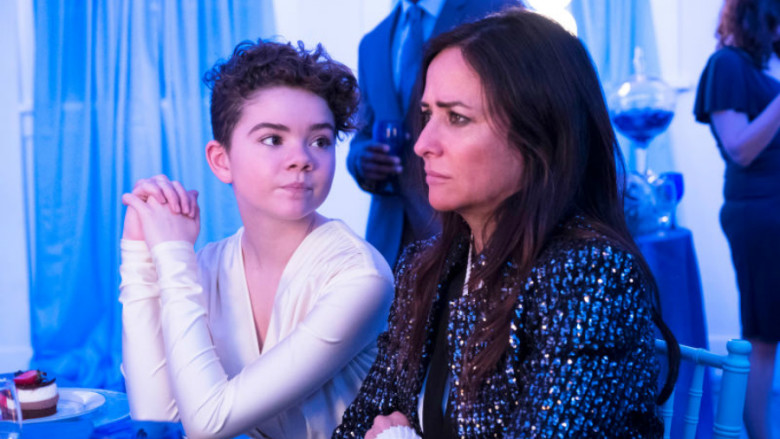 Sam and Frankie get to the house, and all kind of seems well.  They take out the trash bins together, and Frankie even asks if Sam needs help with the last one.  Sam says she doesn’t, so Frankie says she loves her, and then she goes into the house.

Sam tries to enter the house, but it’s locked.

Fool, did you really think your daughter was over it? She’s an emotionally unbalanced person (a byproduct of being a teenager).

Sam considers sleeping in the garage.  Not sure if she actually does, but it’s a callback from the sad idea that her ex might end up there.

Yep – her ex’s father mentions that Sam needs to continue paying her ex alimony because that grown man cannot take care of himself.

In what world do you ask someone to take care of your own, deadbeat grown child?  And why does he have no shame in even asking?  He asks as if he is asking if it’s OK to get some fruit out of her fridge.

In 2017, I guess people are just living off alimony while they have no children to take care of and no career to maintain.  And they expect to keep living on it until they die.  Huh?

So, Sam hopes that she won’t find her ex in her garage, holed up in there because she no longer financially supports him.

I wish an f-boy would…