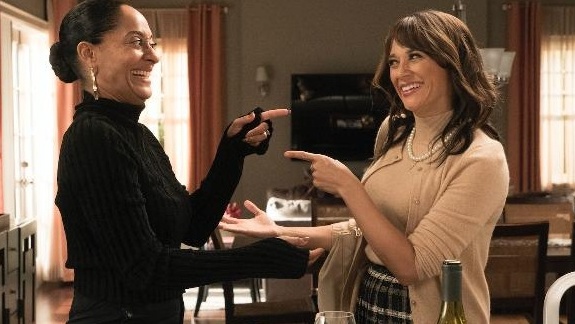 At the Johnson house Ruby calls a meeting between herself and her two children. She went a funeral and was thus reminded of her mortality, as most funeral attendees are. She tells Dre and his sister Rhonda where she wants her ashes sprinkled and that she plans to decide who gets her rental property. Dre, refusing to accept the reality that his mother is nearing the end of her life, leaves the table. He knows he is lucky that both of his parents are still alive, but doesn’t like to be reminded that it may not be for long. Who wants to think about money when you’re about to lose a loved one? However, Dre’s attitude changes once he talks to his coworkers who specialize in winning their dead parent’s money. On this week’s episode of BLACK-ISH Dre and Rhonda fight over their “Inheritance”. 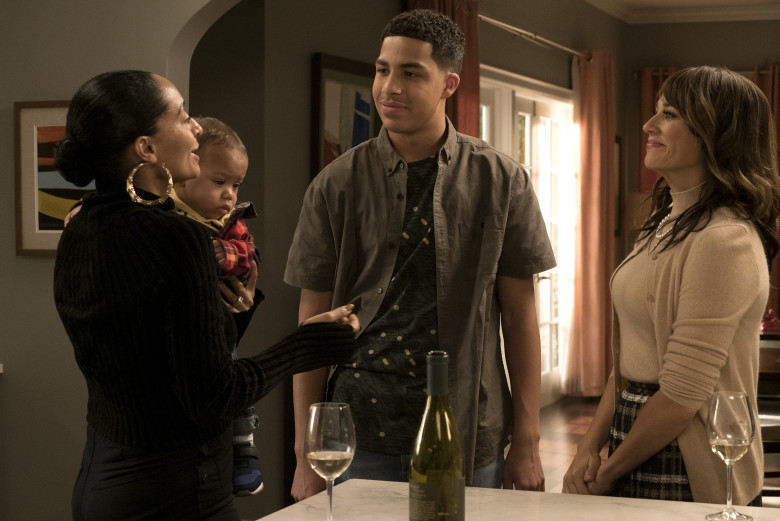 Santamonica, now Santamaria, Bow’s sister drops into the house unexpectedly. Played by Rashida Jones, Santamonica is always going through her latest phase and her latest preoccupation is Christianity. When we last saw her she was a reality TV star, but now it seems that she’s turning over a court-ordered new leaf. Spotting Junior’s equally obsessive work ethic, Santamaria asks him to come on board as her assistant. Bow, who has always treated Junior’s eagerness to babysit his siblings as a nuisance, is eager to get a break from his heavy hand.

But as the week goes on, Rainbow realizes that without his help the Johnson household doesn’t run as smoothly. Unfortunately, Junior doesn’t want to stop working for Santamaria. Despite her alcoholic tendencies, Santamaria actually appreciates Junior’s help. Jealous of his new loyalty to his sister, Bow attempts to forbid Junior from working for her anymore, but this backfires. Junior still refuses to help his mom and is now out of his job with Santamonica. The family always under appreciates Junior so it’s nice to see them recognize what a help he is to them. Finally recognizing how much she needs him, Rainbow asks him to reassert his position as family caretaker. Junior’s character may never get a spin-off, but his departure from the show and Johnson family is certainly one that won’t be taken lightly.

At the office, inheritance becomes a big topic ad Dre points out the economic inequality that African Americans suffer compared to their white counterparts. Usually, most people of color don’t have assets to hand down to their children, aside from life insurance payouts. This show has always been great at talking about big issues without them feeling heavy-handed. But until other socio-economic issues are resolved, this trend isn’t going to change and all people of color are going to continue to inherit is debt and empty promises.

Ruby would hope that her kids could civilly accept her decision to give Ruby the duplex, but things really escalate when Dre and Rhonda both lawyered up. In all fairness, Dre does have grandkids and lets Ruby live at his house. So, his claim on the property feels a bit more valid, but Rhonda is holding steadfast onto what Ruby said. Ultimately, she and Dre decide to create a buyout plan so that neither of them gets the short end of the stick. 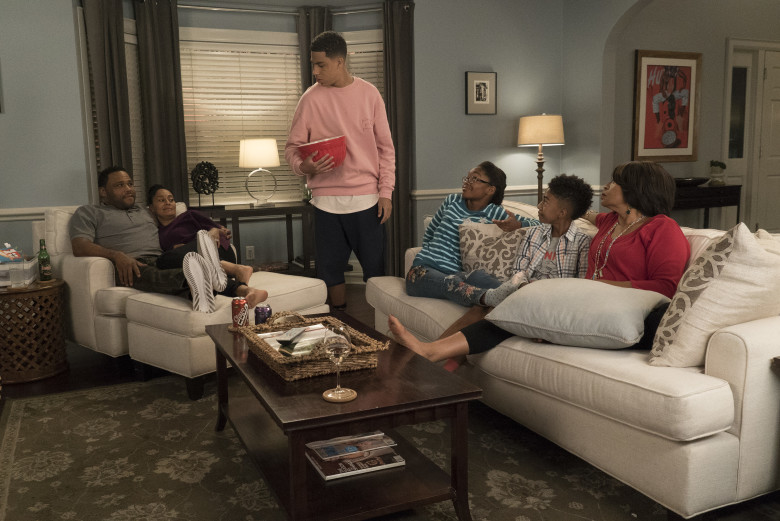 Though this episode had its moments, it lacked the overall oomph that Black-ish usually brings to the table. Could their dynamic be suffering from the absence of both Pops and Zoey this episode? The real fizzle was most likely due to our lack of investment in both Santamaria and Rhonda’s characters. The audience simply doesn’t see them enough to care if they succeed in their goals or not. Black-ish is a show that relies on its ensemble dynamic to succeed and this episode demonstrates what happens when the chemistry isn’t quite there.