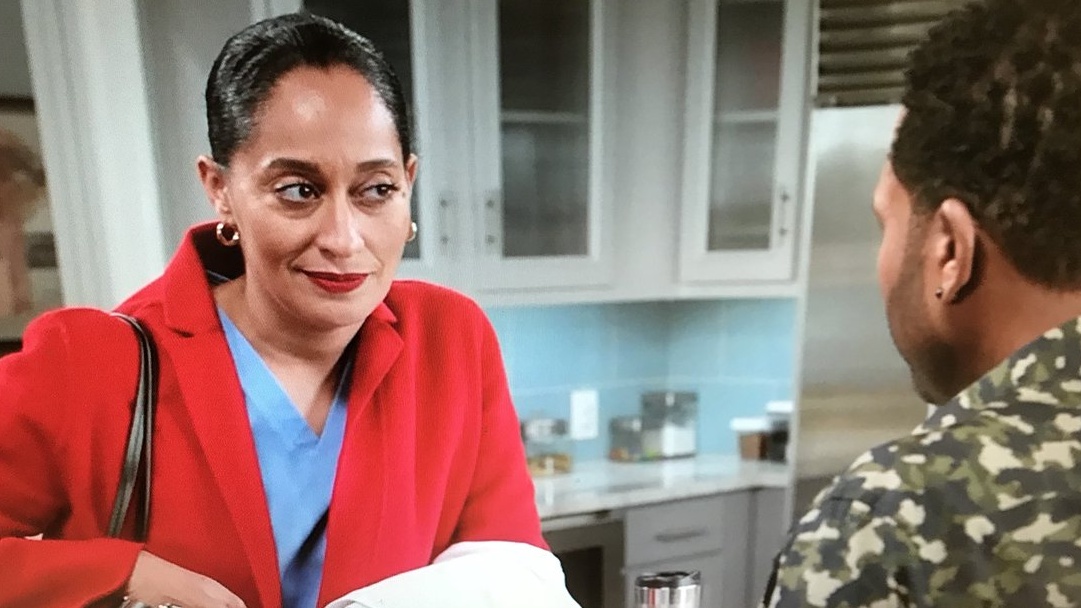 Black-ish returns to TV this week just as the second head of the Johnson household, Rainbow, returns to work in this week’s episode titled “Working Girl”. Her transition out of the home and back into the hospital isn’t going as smoothly as she may have hoped. Balancing work and family can be difficult for any parent, but for a top anesthesiologist and most mature Johnson parent the roles of both nurturer and provider are weighing pretty heavily on Rainbow. Recognizing her concerns Dre presents the option of Bow continuing to be a stay at home mom, a move which fells regressive for flower child feminist Rainbow.

But Rainbow’s work-coming has been less than ideal. Not surprisingly, Rainbow’s decision to return to hasn’t been rough for only her, but every member of the Johnson family. Junior has once again reasserted his role as DeVonte’s number one caretaker, while the twins don’t want Bow to return to work because she does all of their homework. In the interim Ruby has donned the hat of the twin’s math tutor. She may not have finished real school, but she graduated from Street Smart University and her methods aren’t exactly ethical. Well her “rules are for ugly people policy” earns the twin’s a failing grade in math. Dre isn’t the only one who wants Bow back in the house.

Rainbow staying at home meant that things could run more smoothly for everyone. She didn’t have to miss any baby milestones and could be there to support the kids still in the next. But her initial reaction is almost enough to make Dre scrap the idea of Bow becoming a homemaker completely until his boss tells him to try the Japanese way of gifting by asking three times. Charlie says that Dre doesn’t need to ask, but rather “check his girl”, but it’s not about controlling Bow for Dre. Every woman he knew growing up had to work, so he wanted to make sure he became successful enough so his wife didn’t have to. Ultimately, he knows that the decision isn’t for him to make. It’s a choice that Bow will have to make on her own.

The next day at work Bow is determined to prove how awesome of a doctor she always was. But her success at work seems to have compromised her progress at home. Without her, the kids have become more independent. Junior has given DeVonte a new nickname and Zoey has packed all of her things for college on her own. This is the last straw for Rainbow who then questions if she truly wants to do it all. She has been fighting Dre’s advice because he isn’t the one who can give her permission to work. Bow has spent her whole life working towards both her career and creating her family, and she has greatly enjoyed both of those things. In reality, she can be all of those things but doesn’t have to do them all at the same time. Ultimately her decision to continue her maternity leave doesn’t make Rainbow weak or any less of a modern woman.

It’s moments like these were Black-ish really shines. The question of whether a stay at home mom can still be considered successful is still a heavily debated topic. Especially in countries like America where most people’s jobs don’t offer great family planning benefits. The ability to choose a career or to be a stay at home mom is what women have been fighting for all along.