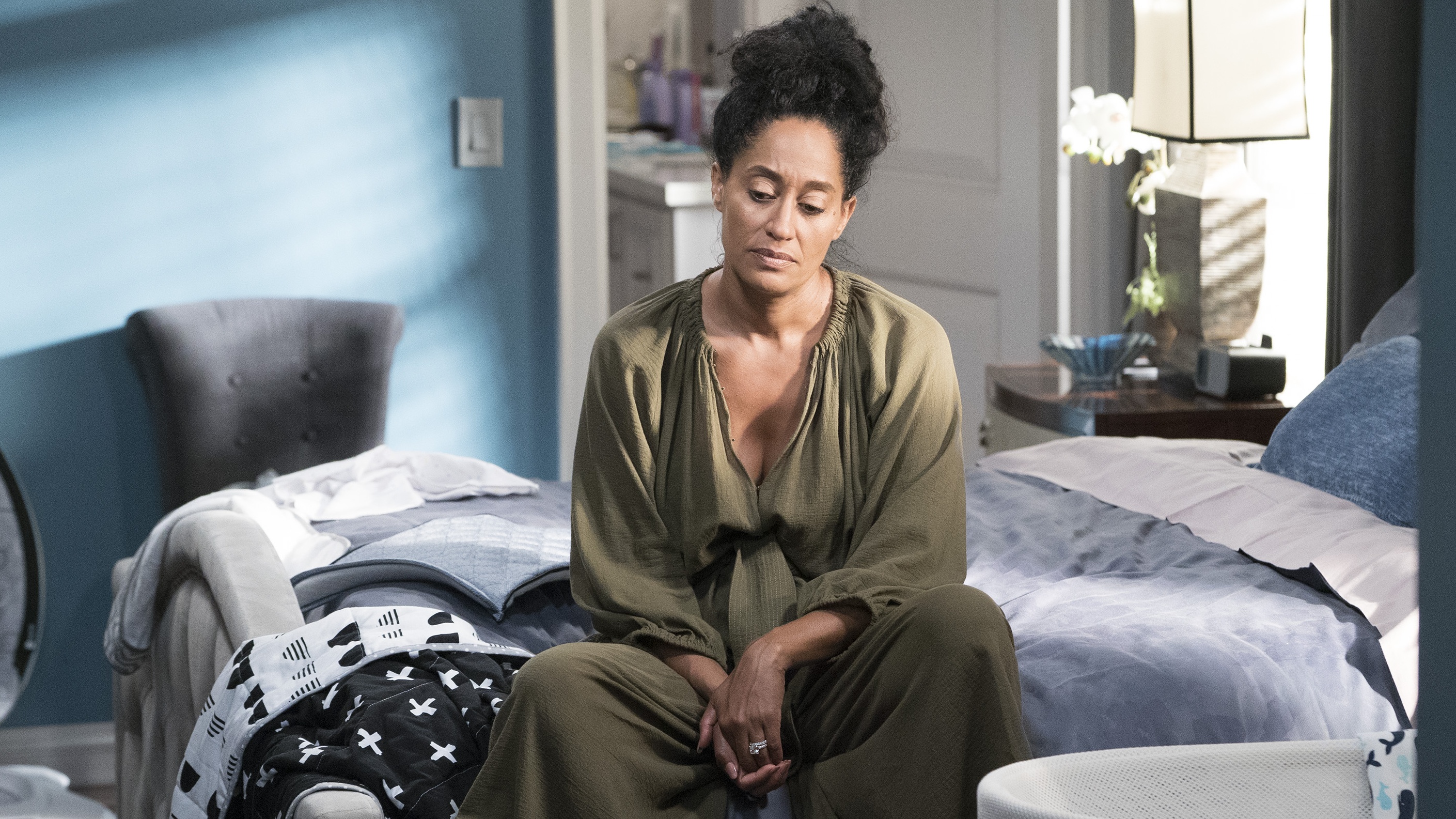 Postpartum depression. According to the Centers for Disease Control, 11 to 20% of new moms each year have postpartum depression symptoms, but until recent years this condition has been largely unexplored by mainstream media, especially primetime television shows. BLACK-ISH has never been afraid to tackle tough issues. Whether it be race or religion, this show has a history of looking America directly in the eye and speaking its truth. Season 4 Episode 2, titled “Mother Nature” is no different. Played by the expressive Tracee Ellis Ross, we watch Rainbow cycle through the experience of becoming a new mother and dealing with some new emotions that have come along with it.

It has been a few months since the new baby DeVonte has come into the Johnson’s lives. Although it can be hard for kids to adjust to having a new sibling, it’s Rainbow who has taken his arrival the hardest. Visibly stressed and depressed, when Rainbow isn’t bursting out into tears she is scrambling to deal with even the simplest tasks when caring for the baby. Sensing her intense anxiety, Dre, played by the show’s executive producer Anthony Anderson, tries everything to make his wife feel better. He compliments her and checks in on her emotional well being often, but it seems to be doing more hurting rather than helping. 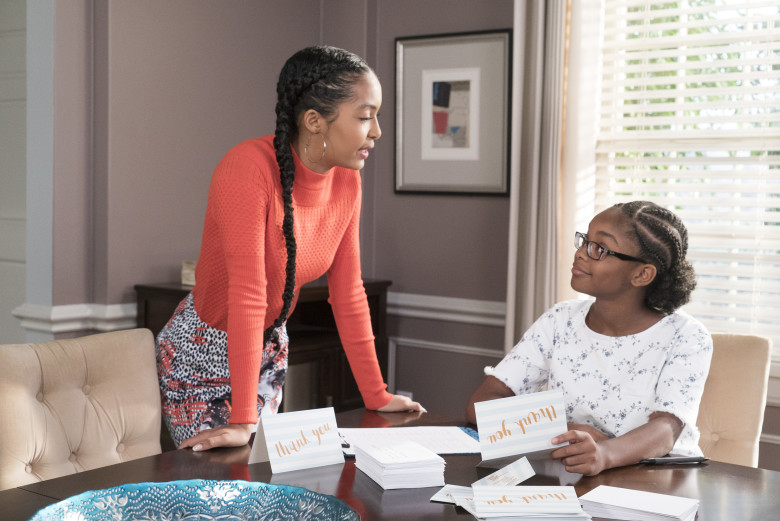 Seeing their Mother struggling, the kids decide to each take on more responsibilities to help care for the baby. Diane, the evil twin, tackles writing Thank You cards for the baby gifts the family has received. This may not have been the best job for her because Diane lacks the filter and emotional depth to actually send heartfelt cards. But it’s the thought that counts right? Jack opts for baby proofing the house, a job that he at first doesn’t do well enough, but then in his second attempt maybe too well. Pops is unable to open any of the baby proofed cabinets or doors and threatens to spank all of them if they put “a lock on one more thing”. Junior takes on the most responsibility by offering 24/7 skin to skin contact with DeVonte. It may be a little wacky, but the kid’s genuine concern is heartwarming, to say the least. Unfortunately, it’s not enough to get Rainbow back on her emotional track.

At his office, Dre turns to his coworkers and they offer some surprisingly helpful advice. His coworkers suggest that he use a women’s magazine to read up on the issue. Though this can’t replace a doctor’s advice, it is a good starting point. Back at his house Dre manages to convince Rainbow to take a quiz to determine if she has PPD and with a 49/50 score they decide it best to get confirmation from a professional. 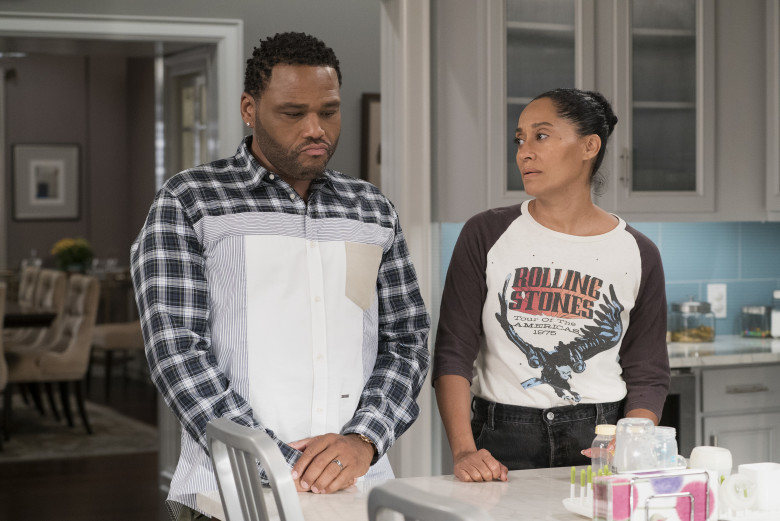 At the doctor’s office, she confirms Dre’s suspicions that his wife is suffering from PPD. Her diagnosis is hard for Rainbow to accept. But postpartum depression is much more common than many would like to admit. “In fact, more women will suffer from postpartum depression and related illnesses in a year than the combined number of new cases for men and women of tuberculosis, leukemia, multiple sclerosis, Parkinson’s disease, Alzheimer’s disease, lupus, and epilepsy.” informs the Centers for Disease Control. Aside from the diagnosis, it’s even harder for Rainbow to accept that she will need to be on medication, and the effects of the treatment won’t necessarily be immediate. Reluctant, Bow agrees to start a pill regiment as long as she is still able to breastfeed, a bonding time that is extremely important to her.

At the Johnson’s residence Bow still isn’t back to 100%, but she is still trying to make it work. However, she is pushed over the edge when Ruby gives DeVonte formula without her permission. This was a clear overstep by her Mother-In-Law, but it’s hard for Ruby to admit when she is wrong. With an intense performance by Tracee Ellis Ross, she exclaims how she cannot hope to get better while Ruby is still in the house. Hurt, Ruby concedes and moves out of the house.

A few weeks pass by, and the family is feeling more broken than ever, Without his Mother to turn to for support, Dre has no choice but to play the waiting game with Rainbow’s illness. She is still on her medication and has been writing in her journal daily as advised by her therapist. Ruby even comes over to make amends and admits that she was weak for not being more supportive of Rainbow. It’s not enough for her to be invited back into the house, but Rainbow seems to genuinely appreciate it. Later in the evening the kids see Rainbow playing with DeVonte in her room, and while she is still far away from being her normal self, it looks like the old Bow will be returning sooner rather than later.