Jake finds himself stuck between a rock and a hard place in the premiere episode of season five of Brooklyn Nine-Nine. The season starts on extremely strong feet with great pace and jokes that land really well. Clearly, prison jokes are thriving territory for the show.

I found myself laughing more times out loud at this episode than I have at any comedy since Parks and Rec. This is a surprising, but hugely promising, start for a series that’s now entering its fifth season. While the show has always been funny, it’s never quite lived up to the humor of its older TV cousins – Parks and The Office. Season five might be where that changes, though.

The episode spotlights every character – except Gina (is she having her baby? Nothing is mentioned of Gina’s absence from the episode) – with an opportunity to truly let their personalities shine, and man, do they shine. 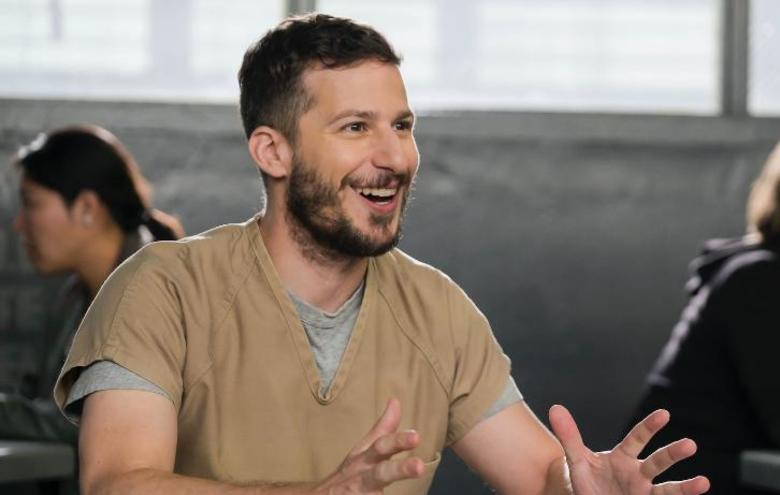 In particular are Jake’s, as he’s adjusting to prison life, and Holt’s, as he takes on a more father-like concern for Rosa while still being his unapologetically Holt-self. Rosa and Holt are always a great combination, as their deadpan characters are so similar yet drastically different, creating incredibly awkward but humorous situations. Two highlights from this episode: “Rosa” written on Holt’s palm, and Holt playing “the gay card” on Terry to get out of riding Rosa’s motorcycle.

Jake’s jokes have always been best when he can play off of another character that is even more ridiculous than his own character. This is why Charles works as his best friend, and why Jake having a child-eating cannibal as his cellmate sits so incredibly well in this episode. As Jake tries to survive and navigate the prisoner food chain, he gets opportunity after opportunity to comment on his cell mate’s remarks on his cannibalism. And while eating people is super gross, joking about it is actually super funny. 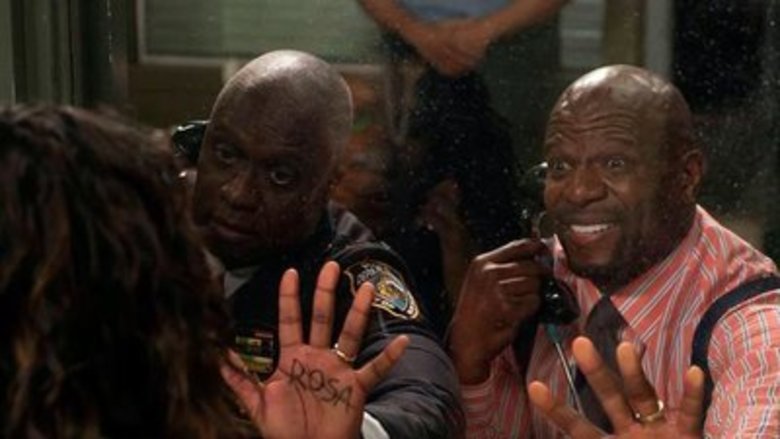 We pick up a little while after the end of season four, with Rosa and Jake doing time in prison for the bank robberies they were framed for. Meanwhile, the rest of the team pays periodic visits to them and works on trying to prove Jake and Rosa’s innocence. It’s pretty slow going, though, as the officer they were framed by expertly keeps her record clean.

Rosa hates prison, but we don’t actually see the experiences she’s having that make her hate it. Instead, we see her coping with visits from Holt and Terry, who are both having almost a harder time dealing with Rosa’s incarceration than she is. They ask her if there’s anything they can do for her on the outside, so she makes them long lists of things for them to do. In true Rosa fashion, they’re all super annoying and inconvenient things, but Terry and Holt refuse to let her down. Each time they come to visit, Rosa has a new list of things for them to do, each task more difficult than the last. They play this back and forth game – Rosa trying to break them, Terry and Holt refusing to admit her requests are too much – until Terry finally breaks and tells Rosa she’s asking too much of them. Rosa is relieved because she didn’t want them treating her differently anyways – she just wants normal. But in Rosa’s nature, she couldn’t just tell them that. She had to make them learn that they didn’t actually want to treat her differently, either. 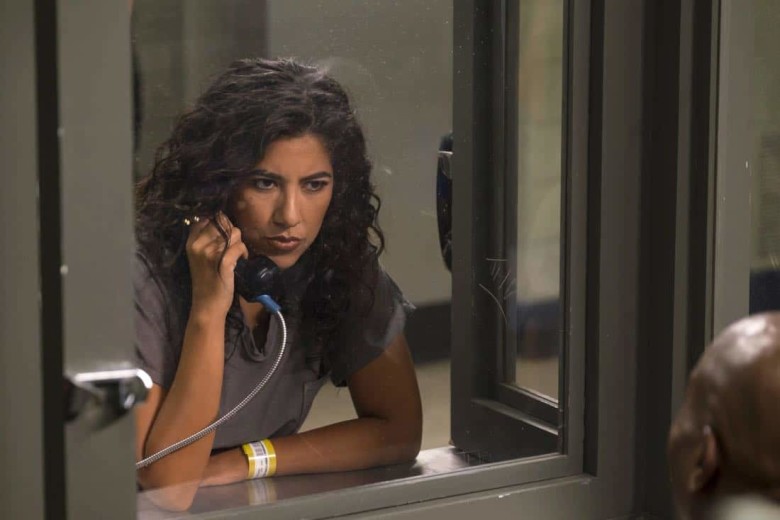 Jake’s experience is a little more involved. He’s being kept in a prison in South Carolina, which means Amy and Charles can only get down to visit once every three weeks or so. The isolation away from the people he loves is driving Jake nuts, so he orchestrates a plan to acquire a contraband cellphone. The plan goes great until the prison warden finds some of the outside soup Jake was using to trade for the cellphone in Jake’s cell. As punishment, the warden sends Jake and his cannibal roommate to the regular side of the prison, and out of protective custody, which is where they had been.

Because Jake is a cop, he realizes that in order to survive, he’s going to have to join a gang. No gang wants to take him, however, until he goes back to the gang leader, Romero, who got him his contraband cellphone in the first place. Romero tells Jake that in order to join his gang, he has to kill a guard. Jake convinces him that Romero should let Jake join his gang if he just gets the guard fired, not killed. Romero agrees. 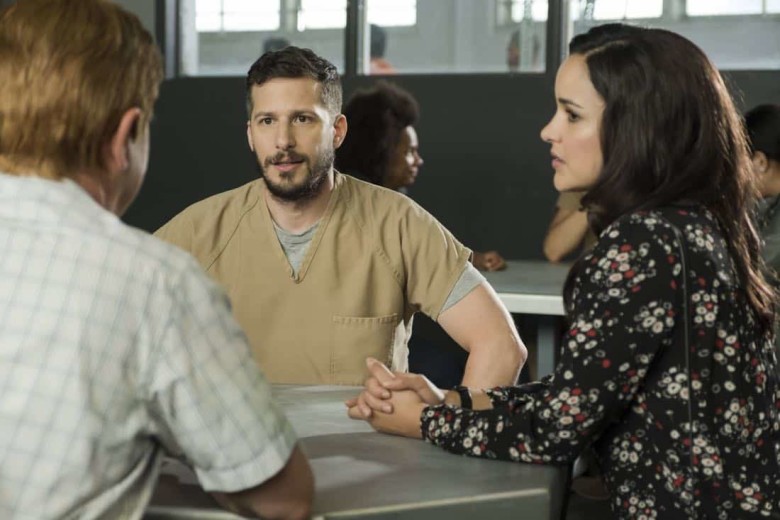 Jake sets up an elaborate plan to get beaten up by the guard and have it recorded on his cellphone. After a few tries, they get it right, but the warden catches them with the phone while he’s trying to cover up the evidence that his guard beat up a prisoner. Jake confesses that he was trying to join Romero’s gang for his own protection and was trying to save the guard’s life by getting him fired. The warden gives him a proposition – he can keep the phone and the warden will fire the guard if Jake digs up dirt on Romero that will help the warden out. Jake is worried about his safety if he agrees to become a snitch, but he’s desperate to keep his phone and his outside connection to the world and Amy, so he agrees.

Will Jake and Rosa survive prison, and will their charges ever be dropped? No matter what happens, here’s to hoping next week’s episode is just as funny as the first.