Brooklyn Nine-Nine offers up a Thanksgiving episode that is just slightly more than bland in this week’s episode, “Two Turkeys.” While the plot of the episode certainly sounds enticing: Jake and Amy’s parents are meeting for the first time and couldn’t be more different, while Captain Holt interrogates the precinct over a missing pie, the episode falls into the cookie cutter realm of episode plots most befitting to the show, and doesn’t do much to deliver a lot of the sharp-witted jokes we’ve become used to this season. 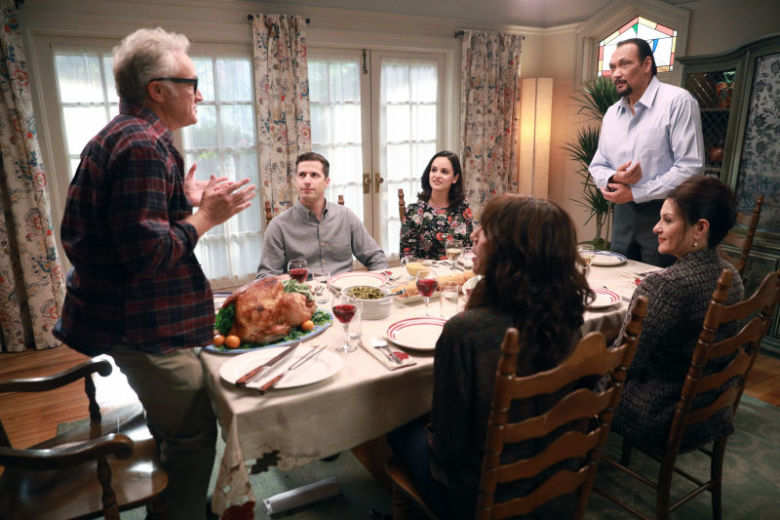 It was also interesting to see the show choose Holt as the person to get angry over missing food. Holt has always been the character least interested in food in general, so it did seem a little bit out of character that he would care so passionately about a pie. But it also made his overreaction at its disappearance that much more unexpected and funny. I actually wrote a spec of Brooklyn Nine-Nine once that had a very similar plotline, except mine involved Terry and a bunch of missing yogurt, and Jake was the one questioning everyone, but everything else was pretty much the same: interrogating the precinct, finding out the real culprit was the significant other (in the case of this episode, it was Kevin, in the case of my spec, it was Amy).

I mention the comparison simply to reiterate my point about the cookie cutter plot lines of this episode. While humorous (though not nearly as strong as previous episodes this season) the arcs of the episode aren’t very imaginative for the show. And, for being a holiday episode, it doesn’t add anything particularly spectacularly funny to the narrative. 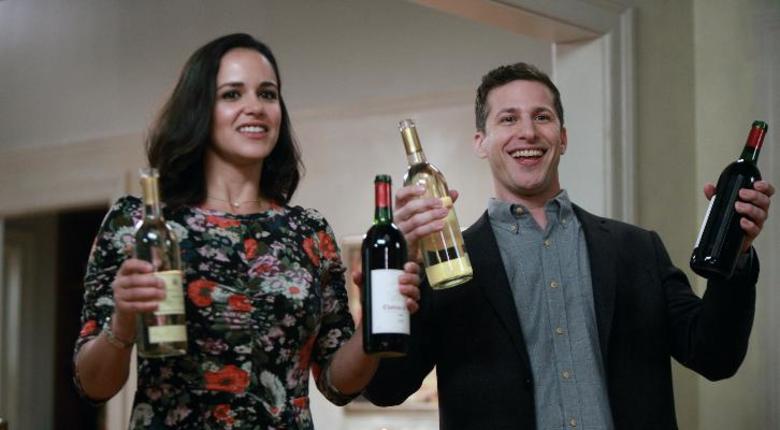 Jake and Amy’s parents meet in this episode, and that’s essentially the focus of the show. Amy and Jake attempt to keep their families from falling into disgruntled chaos, hoping to make it through the holiday with both sets of parents getting along, despite their absolute and total difference from each other. Amy’s parents are essentially more exaggerated versions of her Type-A, controlling self, and Jake’s parents are basically worse versions of Jake’s chaotic tendencies. And both sets of parents are even more competitive than Jake and Amy.

The entire holiday is about to go down in flames, with Jake and Amy even fighting and getting increasingly competitive with each other, until Jake’s dad cuts his thumb off. In fact, this scene is probably the highlight of the entire episode and the most memorable moment of the Thanksgiving themed show. It’s very much a physical comedy bit, with blood spurting everywhere in a scene that’s reminiscent of Thanksgiving 1915 flashback in Friends where Phoebe plays a nurse who gets her arm “blown” off. 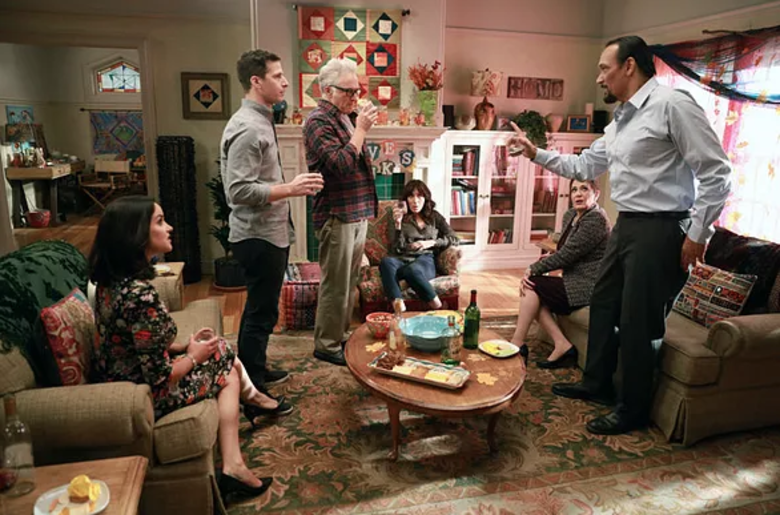 In the end, it’s this bloody accident that winds up bringing Jake and Amy’s parents together, with Amy’s father making sure the medical staff takes Jake’s father back to get his thumb sewn back on right away. The episode thus does its job of tying in the spirit of Thanksgiving (aka embracing family – old and new) even it it’s not quite as effective in its joke delivery as the rest of the season has been.

Hopefully next week’s episode will return to the sharp writing we’ve gotten used to this season.