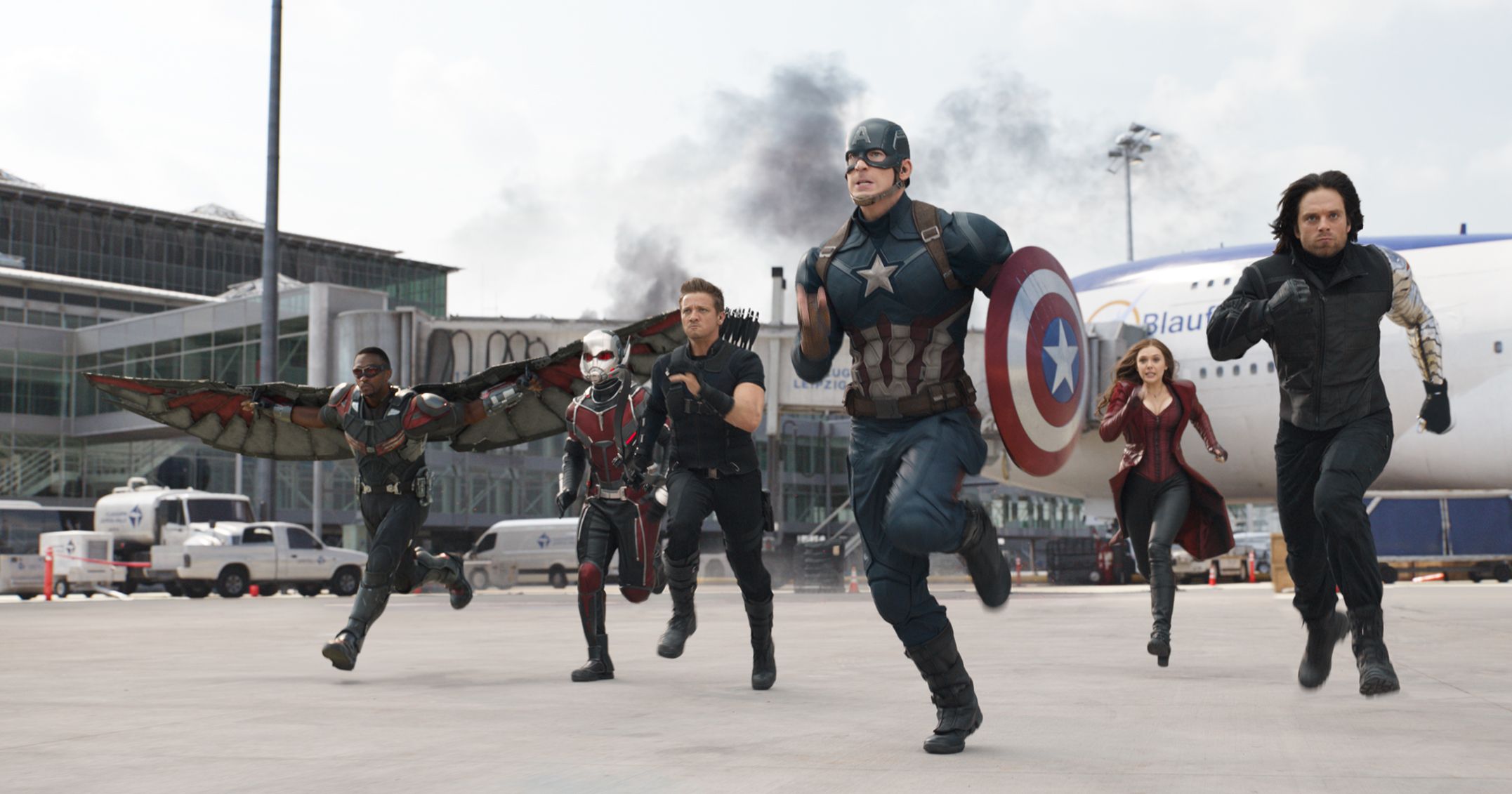 As Uncle Ben famously said to Peter Parker in Sam Raimi’s 2003 Spider-Man, the film that arguably kicked off the modern superhero movie renaissance, with great power comes great responsibility. The superhero genre has become a great power at the box office, so what responsibility do these caped capers have to their audience? Do we deserve grounded characters and relatable, human emotions? Should the superhero movie teach us something about ourselves, or something about the way we should strive to be? Or is it enough to look cool, to have tech and magic and punching mix together into a nonstop thrill ride?

Do we really have to choose? The answer is no, at least not in CAPTAIN AMERICA: CIVIL WAR, Marvel’s newest entry into the ever-expanding Avengers universe. The choice here is between two opposing forces of heroes led by close friends and Avengers co-captains Steve Rogers and Tony Stark, aka Captain America and Iron Man. When the world decides that superheroes are too dangerous to continue saving the day without oversight, the UN ratifies a treaty compelling ‘enhanced individuals’ to submit to an international governing panel. If they don’t accept the panel’s terms, they can hang up their spandex and “retire” or risk arrest and imprisonment in the Marvel universe’s version of Azkaban. This sets up the titular War, with Cap leading the forces of individual responsibility and Tony supporting the side of responsible government regulation.

One of the many strengths of Civil War is that, even though this is Cap’s movie, it’s not clear at all which side is in the right. It’s a thinking man’s superhero movie, asking the audience to choose whether the responsibility to do good in the world falls on each of us individually or all of us together. It asks what we should do when doing good also means doing evil, by showing the collateral devastation that past superhero movies have glossed over or even been criticized for glorifying. The epic skyline battle of the first Avengers movie is replayed here from a new, more terrifying perspective: shakycam street-level news footage of everyday people forced to run screaming from chunks of raining concrete as the Hulk jumps off a building onto an invading alien soldier. It’s rare that a big-budget movie like this pauses to ask where all the blown-out glass and shattered rebar actually ends up during the epic third-act showdown, but here it’s part of a fundamental question of responsibility. The Avengers are facing the trolley problem on a global scale: if they do nothing, many people will die in the increasingly-frequent cataclysmic events that follow the Avengers around, but if they take action they will almost certainly be the direct cause of those deaths themselves. The Vision (played with quiet dignity by Paul Bettany) asks the question directly: can their cause really be considered righteous if it requires the kind of sacrifice they are sworn to prevent? In this Civil War, the consequences of heroism are questioned to the core, as are the heroes themselves.

No one feels the weight of those consequences more that the Star-Spangled Man with a plan. Chris Evans has always been the squarest jaw on the Avengers but in his last installment (2014’s The Winter Soldier) he stood for the spirit of freedom against the forces of surveillance and security. Now, things are murkier than the clear-cut battle of SHIELD vs HYDRA, and Cap needs to rely on his inner moral compass more than ever as the world starts to spin faster and faster around him. Evans has always been a great choice for this character and he remains so in this movie, planting himself like a tree against the forces of evil as he sees it and inspiring loyalty in his teammates with only his quiet sense of conviction. Playing opposite, Robert Downey Jr. brings the most emotion to his role as Iron Man since his own first film, as the normally self-assured ‘playboy billionaire genius’ starts to question why he’s fighting against his longtime friends and allies. He rallies his teammates to follow the new laws out of fear of something worse, even as that something worse starts to find them anyway. Iron Man’s commitment to upholding the accords leads to the movie’s best fight scene as the two teams of heroes battle it out in an abandoned airport as Iron Man tries to prevent Captain America from escaping the city after refusing to sign or retire. There are no civilians here to drop concrete on, just an amazing ballet of kinetic camerawork by the talented directors the Russo Brothers (who also directed Winter Soldier) and plenty of one-liners tossed between the heroes as they battle it out. This fight scene also doubles as a showcase for the supporting characters that drop by to liven up the movie – without spoiling anything, let’s just say that fans should start getting excited now for Sony’s recently-titled Spiderman: Homecoming. The theater went wild for the new, appropriately high-school-aged Peter Parker even before he puts on his Spideysuit and newcomer Tom Holland brings something the Marvel universe movies need badly: a sense of perspective about how totally awesome it would be to meet a superhero.

Also joining in the melee is another new face that’s turning a lot of heads: Chadwick Boseman commands the screen as the first-ever live-action incarnation of the Black Panther. Radiating authority and responsibility, the future ruler of Wakanda will get his own movie next year, but until then, he’s here in Civil War to kick ass, take names, and refuse to explain himself. Comic book fans already know that Black Panther is currently starring in a new run of his own comic written by Ta-Nehisi Coates, a winner of last year’s MacArthur Genius Grant, and his inclusion in Civil War suggests that Marvel knows their mostly-adult audience is ready to embrace more complex ideas hidden in their popcorn fare. Another exciting thing about Civil War is how eager fans will be to see more from characters like the Panther and others who show up in short cameos here, like a sizzling appetizer for a meal that’s about to arrive. It can’t be easy to take a roster like Marvel’s, which can easily boast over a dozen named heroes per movie, and draw out a coherent story where everyone has something to do but no one feels overdone. Somehow, Civil War manages this balancing act by making sure the focus stays on the fallout between Iron Man and Cap, and as a result the movie is densely packed but engaging throughout. The main heroes carry the dramatic plot while the supporting characters keep things moving with plenty of levity and charm.

It’s not all fun and games though: the most enduring impact of Captain America: Civil War is actually that it has any enduring impact at all. Normally, a movie like this would follow a predictable, crowd-pleasing formula: the heroes find a conflict, are nearly beaten by it, then dig down for the reserves to triumph over evil. The day is saved, the love interest is kissed, and everything goes back to normal with the hero wiser and a little worse to wear for the experience. But that’s not the way it happens here.

In a way that two previous Avengers movies and a certain recently released Vs. movie didn’t quite manage, Civil War actually changes the game. Actions beget results, choices have consequences, and there is no flying off into the sunset. It’s a movie with emotional weight and it draws you in as if you were one of the team, watching helplessly as forces beyond your control tear apart something you once thought was unbreakable. It proves that in the world of heroes and villains, the line between them is not as clear as it used to be; it’s a mirror held up to our ever-darkening world that still believes there can be a light at the end of the tunnel.

I give it 4.5 superheroes charging towards one another out of 5.