CASUAL is beginning to find itself in a bit of a crazy place. With not much going on in terms of plot, but quite a bit pushing forward as far as themes and character development goes, this week’s episode proved the opposite. And it was a bit of a letdown. When you think of Casual rarely do you remember plot or how things went down. In the entirety of last season, only a couple plot points stick out. Casual is a show about relationships, and although this week’s episode touched on that, there were a lot of problems along the way.

Perhaps the biggest issue I had with this week’s episode is how easy and sudden not only the revelations were, but the reactions to them. There was little push or pull, little argument, little trying to figure out why, and so an episode that should’ve been ripe with development felt like a moonwalk through emotion. 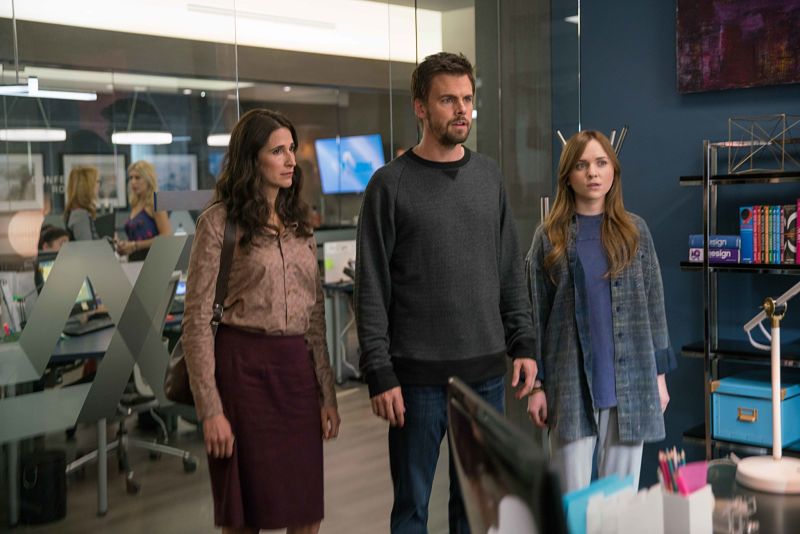 The biggest problems with the episode lie with Alex. Finding out that his new boss Jordan is engaged to his ex-girlfriend Sarah seems to have some serious ramifications on Alex’s mental stability. He wanders around the entire episode yelling at people but not getting anywhere. His initial problems lie with Sarah, but that bleeds over to Jordan fairly quickly. Because Jordan’s camp has a controlling share in Alex’s (former) company, Alex feels like Jordan is using this to get back at him for dating Sarah. Not only is this beyond stupid, but the fact that it’s entertained on a road to nowhere just feels like an absolute waste of time. It’s hard to fathom that Alex truly believes this until him and Jordan have one of the strangest conversations I’ve seen on TV.

Literally everyone in Alex’s life at this point is telling him to calm down. Valerie, Laura, even Sarah is just asking him to calm down and maybe he’ll see that the big picture isn’t out to get him. Everyone except for Jordan. When Jordan confronts Alex about coming in late to work I expected him to be like “Hey man, I know you think I’m riding you because of Sarah, but that is so far from the truth. I just want to make a positive work environment and hopefully we can be friends down the line and continue to make great products.” Instead he says the exact opposite. Not only does he say, “We’re business partners, let’s shoot for civil,” but he also lingers the idea that this could be all about Sarah. He blatantly says that Alex has a “reputation” an extremely cryptic thing to say, and that Sarah told him there was a problem with his family. Later Alex finds out that his father told Sarah that he was cheating on her (which he was) and that was the reason for the sudden change in personality from her. And even later, Alex seems to hold a hatred over his father for ruining yet another thing in his life, but none of the actual issues are being looked at here.

The problem with Alex is not Sarah, it’s not Laura, it’s not even Valerie (but it should be for a lot of reasons). Sure in some abstract, it’s with his parents, but in the immediate, his problems lie with two people: Jordan and himself. Jordan is an antagonist and a bit of a control freak and it’s easy to pick up on the cues that this will continue. But Alex’s complete inability to say, “Yeah, I’m screwing up” and own up to it is extremely distracting. Any real growth that might have happened in this episode feels robbed by Alex projecting on his father, and, quite frankly, it just feels unearned and too easy.

If Alex didn’t show any real growth, than Laura manufactured a bunch of fake growth this episode. Everything about Laura feels disingenuous and it’s hard to understand who she is, what she wants, or who she’s angry at. This isn’t bad at all, it’s actually an interesting choice for the character, but it takes effort to wade through everything to find out what’s really going on, and sometimes it’s hard to come up with anything other than immaturity. Laura begins this episode over breakfast with her father, finding out that he’s trying to have a baby with his new girlfriend. This seems to rattle Laura more than I would expect, and the emotion carries her throughout the episode.

Laura tries to find drugs to cope with it all and ends up getting some from a Black peer. The two of them exchange stereotypes right after she asks Aubrey if she wants to go to her place and get high. They do just that, but again, it’s hard to find any meaning in any of it. It’s even more obscure when Laura and Aubrey steal a couple bikes from her dad’s garage and trash them before sharing a passionate kiss. What the hell is going on here? I get that she’s going through a confusing time, but I think much more confusing than Laura’s actions is why Aubrey is so down. Is Aubrey into Laura? It’s hard to tell who initiates the kiss, but it definitely feels like Aubrey was happy to go through with it. There’s not enough in this episode to make any real assumption, but it definitely feels like there’s more at play.

And finally Valerie, upset with her husband’s plan on having a baby, spends the entire episode attempting to freeze her eggs. The sad thing is that the whole tone of it feels like hijinks. Everyone around Valerie is acting crazy (her gynecologist for no apparent reason starts laughing over The Minions movie) and that’s a dangerous slope. The reason why is because it’s impossible to take kind of a serious matter seriously. Maybe the off tone was to show that Valerie was never serious about it, but I find that hard to believe. The frustrating thing about this plot is that it goes absolutely nowhere. Jennifer nonchalantly talks her out of it and Valerie is so quick to agree that you can’t help but feel like your time was wasted.

Casual has brought much better episodes to the table. With a couple of throwaway plots and one confusing one, there’s not much of an overall theme or even a takeaway from this episode. If there’s anything, the episode is asking you to be patient and wait and see. So let’s wait and see.