This season of CASUAL has been largely about friendships, and this episode is no different. Instead of repairing their lives with casual sex or hopeful relationships, all of our main characters are trying to position themselves for friendship. Even Alex, who has plenty of friends and a very close friend in Leon, is searching for approval at his workplace and seeks to make friends out of his coworkers. It’s how Alex creates a safe environment for himself, especially in a hostile situation like selling Snooger to a corporation.

But the other theme to this episode, perhaps even more than friendship, highlights the process of an outsider breaking in. It’s a tough path, an arduous process and rarely are two situations the same. And yet we all put ourselves through it, because we believe it will make our lives better. And so we have all of our characters caught in the process of trying to break in.

Valerie gets invited to the weekly game night by her budding friend Jennifer. Impress at game night and you not only impress Jennifer but also her friends. What’s even more is that Jennifer is trying to hook up Valerie with a friend named Harry, a man who is described as loving game night but not in a creepy way.

Laura tries to become better friends with Aubrey, the girl who made a lasting impression on Laura with her blunt way of speaking. It must be refreshing for Laura to be around someone so direct in a world where everyone, including herself, try so hard to deflect their real feelings. The two bond over torturing their trigger-conscience home school teacher, making her doubt if any of today’s curriculum is appropriate for such a “young” audience. Aubrey in particular doesn’t see politically correct culture as conducive, she instead sees it as a mask for keeping the underlying racisms and sexisms from getting addressed. And Laura falls for the rebellion.

Feeling out of place in the new corporate world he sold Snooger into, Alex tries to take some semblance of power back in his work life by inviting everyone over to his place for a BBQ dinner. The problem is he doesn’t even have a BBQ. Denying gas grills for lacking the manliness of the open flame charcoal gives, he chooses a charcoal grill that looks like a grenade, or a big green egg. It’s hard not to feel bad for Alex. In many ways, he’s truly the best hearted character in the show with a truly defined moral code. In most shows, he would be the hero, but because the main character is Valerie, a grey-area therapist, strict moral codes only get you burned (and not by a giant green BBQ.) Alex’s downfall comes unexpectedly. He doesn’t overcook the meat, start a fire too big, or make an inappropriate joke in order to try to win his coworker over. No instead his boss, Jordan, brings his fiancée who happens to be Alex’s ex-girlfriend Sarah. 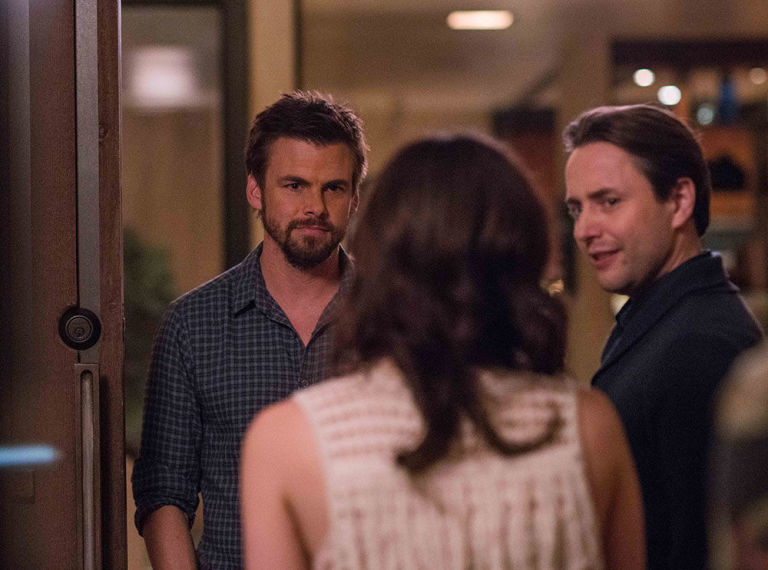 Valerie is welcomed to a very awkward time at game night. It seems neither side told the other about the potential hookup prospects and so Harry brought a date. What’s much worse is that person after person keep coming up to Valerie and apologizing on behalf of Harry. Not only that, but they’re putting a huge target on the back of Harry’s date. Valerie feels uncomfortable with it. When she tries to start a conversation with Harry’s date she gets nothing but one word answers. And when the date takes her turn at charades she’s horrible, opening herself to even more criticism. When Valerie finds her crying on the stairs, she tries to console her by acknowledging the pressure of the situation and that she doesn’t have to prove anything to these people. It’s funny because Valerie is right, but it’s hard to tell if she believes her own advice. Still, it seems to bring some comfort to the date.

Laura and Aubrey meet up at a diner to work together, drink coffee and eat fries. A young guy approaches them and gives them a plate of cookies. Later, when he sees the cookies untouched, he gives them a plate of different cookies. Instead of keeping the charade going, Aubrey calls him out. The scene paints an interesting dichotomy. As a guy, I feel for the him. In no way should we assume he was trying to do anything but start the process of innocent dating with a plate of cookies. Nothing about him seems sinister and nothing about him seems aggressive. But when Aubrey explains her premonition that when she inevitably begins ignoring his texts, he will become “agro and blame her for leading him on,” I totally understand. She’s protecting herself and in a weird way, protecting him too. Aubrey decides that the best thing to do in this situation is to not give anyone a chance to do something they’ll regret and so she nips it in the bud. The guy skulks away, but maybe it’s a lesson to be learned. Regardless, Laura is in awe of Aubrey’s bravado and the two drive home and pass a vape between each other. You can’t help but feel that their relationship is the most real on the show, and yet the most potentially destructive.

Alex doesn’t feel safe at his own barbeque. The last time he saw his ex-girlfriend Sarah, she had stolen every lightbulb in his apartment, even the one in his fridge. But what Alex forgets to realize is that people change. Much of Alex’s arcs and character choices have been grounded in forgiveness and him letting go. He’s had to let go of the anger for his sister, he’s had to let go of the dream of his company thriving as an independent successful product and now he has to let go of the hate and fear he’s had for Sarah. But he’s unable to. He’s unable to acknowledge that she has changed and when Sarah reminds him that they dated ten years ago and that he was an asshole too, it seems to shake his core. What in his life that he holds dear will he be able to keep?

Meanwhile Valerie absolutely destroys charades (in a good way) and makes a great impression. It’s hard to tell if this is because Valerie bought into what she told Harry’s date or if it’s because she really wanted to make a good impression. Regardless she does and it strengthens the bond she has with Jennifer. But the funny thing is that none of this truly seems like Valerie. Valerie is in direct contrast with the attitudes, outlooks and current mindset of the other characters. Alex is trying to find how he fits and Laura is taking in all she can from Aubrey, but Valerie is in the middle of an aggressive pursuit that has lead her to mask many aspects of her personality. It has all the markings of failure all over it, but we’ll see if it continues to develop in a happy manner.