This week’s episode of CASUAL is a tough one to compartmentalize. Casual is a show about relationships in every sense of the word. And although this episode sticks very true to that core and delivers a lot of interesting moments, there is little character growth, surprisingly limited revelations and a lack of emotional development. For most shows, this would be a non-issue, but for something like Casual an episode that just delivers plot (no matter how interesting it is), has to be viewed as something of a miss.

Casual finds a similar format in most of its episodes. Usually we follow Valerie, Laura and Alex on separate journeys that reconvene in Act 3 for plot purposes, but have separate thematic and emotional resolutions for each character’s journey. The last two episodes haven’t done that. And whereas I thought last episode was a miss, this episode delivers on what it’s trying to do, and that is give us three separate journeys with three separate endings.

The episode feels more like the second part to last week’s episode, which we haven’t seen Casual do this season. Every plot from last week is carried over. Valerie is in the middle of trying to figure out if she should stick with Harry, the boring nice guy that her new friend Jennifer really wants her to get with, or Jack, the dangerous(?) guy. Alex is obsessed with making his ex-girlfriend jealous. The problem is, his ex-girlfriend is engaged to his boss. And then the girl he’s trying to make her jealous with is his boss’ assistant, who also has the strangest name on the show: Fallon. And lastly Laura is trying to figure out how sexually she’s into Aubrey. Of these plots, none of them end up making sense. On paper they all should, but in practice the show takes some weird turns. Take Valerie’s plot line. Probably the most straightforward of the three, Valerie is caught between two people, boring Harry and supposedly dangerous Jack. But in actuality, Valerie is caught between offending Jennifer, the new friend she’s trying to continue impressing, or pleasing Jennifer. And Valerie doesn’t try to hide it. She tells Jennifer that she doesn’t really like Harry and wants to date Jack to which Jennifer gives her one of those condescending, “I just don’t want you to get hurt,” talks. Jennifer has known Valerie for all of maybe two months, so what she really wants to say is, “Harry is my better friend and I’ll like you more if you’ll be with him.” Valerie chooses not to be with him, and instead spontaneously seeks Jack out in a hotel where they have lustful sex and drink champagne on the roof.

I would say Valerie’s plotline is the closest we get to substantial character growth. The big revelation here isn’t that Valerie got with Jack, it’s the juxtaposition of her date with Harry to Jack’s. Both involved alcohol, talking, and sex, but only one left Valerie beaming. Valerie choosing what she wants to do is actually the best thing she could do. Later in the episode she flirts with the idea of going to Harry’s dinner thing, but chooses not to after receiving some stupid drunk texts from Harry.

And then there’s Jack. Everyone has called him a bad guy, and he’s done nothing but be nice, charming, funny, sexual and open. Bad guys are like, “Let’s do blow and see where this goes,” not, “Let’s go on the roof, drink champagne and you tell me something crazy about yourself.” If Valerie ends up getting reprimanded for this, it would be unjust. To say she should’ve listened to Jennifer is a total cop out, and if the show goes this way, it will be disappointing. The point I’m trying to make is that Valerie has as much reason to trust Jennifer as she does to trust Jack, and in that is a very interesting dilemma.

As the show goes on, I’m liking Laura less and less and this plot didn’t change that. There’s not a lot of substance here. Feeling bad after finding out her classmate Spencer is dying from cancer with a projected time of 6 months, Laura wants to do something. But it’s not as selfless as that. What she really wants is an excuse to proceed further in her sexual adventures with her new friend Aubrey. And so she concocts a plan to have a three way. It’s kind of like the plot to Chasing Amy, and just as dumb. But they’re young, and they do it, and it’s awkward, and there’s no real takeaway from it. It’s clear that Spencer means nothing to Laura, they just met each other a month ago. And it’s also clear that the whole thing was too awkward for there to be any real progress for Laura and Aubrey. I felt as though it was just kind of a wash of a plot. 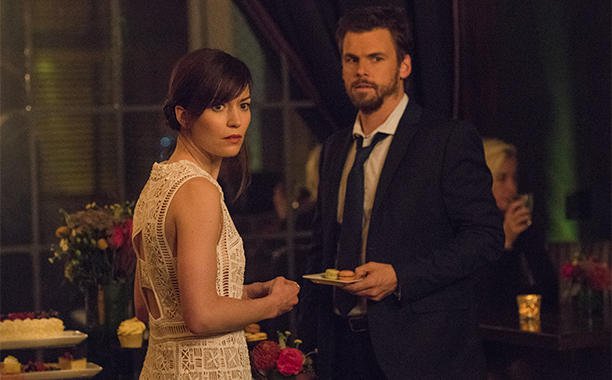 The holder of the most important plotline goes to Alex, as it often does. His day starts with Jordan confronting him about his relationship with Fallon, questioning the appropriateness of it. And here we have the beginning of the problem. Somehow Alex doesn’t pick up on the social cues. The Jordan confrontation is a bit of a misdirect, but Fallon being so into showing off in front of Sarah when Alex invites her to dinner should’ve been a clue. And then one of my biggest problems with the episode happens. Alex takes Fallon to a Korean restaurant and positively points out that there are a lot of Koreans at the restaurant. This is something that I do and everyone should do. If you are at a restaurant of a certain cultural persuasion and there are no people of that culture partaking, you probably messed up. Fallon is kind of racist with a terrible tone the entire date. And so it makes absolutely no sense why Alex doesn’t put two-and-two together when Fallon invites him to Sarah and Jordan’s engagement party. The strangest part is you can see the recognition in Alex’s face: it totally looks like he knows that they’re using each other, and yet he’s shocked when at the engagement party Fallon reveals that they’re using each other! But what’s actually shocking (and convenient) is the why: she’s been trying to make Jordan jealous, as they’ve been having an affair together. In one fell swoop everything changes for Alex, the audience, and Sarah, who finds herself in front of Alex’s door, sobbing. The two of them share a kiss, which seems like a mistake.

There’s a lot to this episode and most of it was good, even if it all didn’t make sense. Regardless, it seems like the plots are all laid out now. Valerie is going to be between Jennifer and Jack, Laura and Aubrey are going to continue figuring things out, and Alex and Sarah are going to think and rethink their lives. We’ll see how it goes.