It seems like we just started, but we’re quickly approaching the end of CASUAL season 3. The good news is that Casual delivered the best episode of the season thus far. It also embraced the weird quirks that they’ve given their characters and emphasized personality defects that we now see are not gaps in writing as much as they are a changing of character ideals over the season. Often time I feel like Casual sacrifices it’s characters to what they deem the “greater-good” of the episode: the plot, and the story they want to tell. This often creates problems for me, and I view it as nothing short of literary stumbling. But this episode manages to not just craft a great plotline, but ground it all in each character’s wants and interests.

The best Casual episodes tend to be the ones where the triumvirate avoids each other. Fearing for Valerie’s interest in her half-brother, Alex decides to go to work (on a weekend or a holiday, not sure) to relax I guess? It’s confusing, but I get it. Alex did just have accidental drunk sex with his equally drunk roommate Ray and both of them are pretty grossed out by it. Laura on the other hand fakes a huge argument with her mom in order to get a sympathy text and a “come on over” from her boss Casey, who Laura is developing feelings for. Valerie warned Laura not to fall for another person older than her, but Laura at this point sees Valerie as nothing but controlling and selfish. And to a certain point she is, as she wants to have sex with Jack, her sort-of boyfriend, despite him being a sex addict.

At this point, none of the main characters interact with each other until the end of the episode when Alex and Valerie talk. Laura’s experience is the most unique in its framework. Laura isn’t a noob when it comes to self-righteousness, but like when girls are not wearing tampons and people are having arguments over hot water, it’s jarring. Laura is there for Casey, and somehow this fact is clearest to Casey’s wife, Selina, aggressively correcting Laura when she’s referred to as, “Casey’s girlfriend.” The relationship between them is fascinating because Selina is so mean to this kid who she obviously perceives as a threat, but you have to remember Laura is a kid. Selina seems to be under the impression that Laura is 20, and I’m not sure where she got that from. There’s no way Laura is 20, unless my math and her education, are way off. There are consistent references to Casey’s infidelity and love for young interns, which turns a sweet scene sour when Casey tucks Laura into a yak hair blanket on a tanned hide couch. 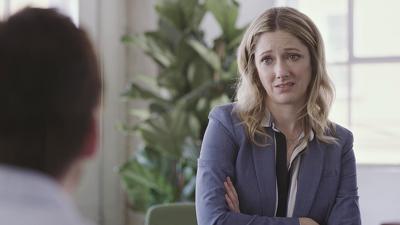 Alex goes to work, the place he has loathed for so long, only to find that he’s not the only person there; Judy and her annoying, wisecracking 8-year old son with no likable qualities are waiting for his father to pick him up. From the jump you know how this is going to end up: her ex is not coming, and Judy has work to do. The good news is that Alex doesn’t waste time with this plot and swoops in to build something of a relationship with this kid. They talk about classic rock music, mainly Fleetwood Mac, and Alex bluntly describes his own mother as a “groupie,” and then defines what “groupie” means. It’s a great Role Models-esque series of moments and Judy is both impressed and weirded out by it. But the big takeaway here is that Alex and Judy seem to be building something of a personal rapport. There is some sexual tension at play, and after a particularly horrible meeting with Valerie, Alex comes back to work that night with dinner in hand, for him, Judy, and her sleeping son. It’s hard to see if Alex is looking for a friend or something more, but I think Alex is kind of looking for nothing at all. He just wants to make a connection – and he has.

Valerie is defined by nothing but selfishness. It’s the only thing that drives her character these days and it’s why I either have major problems with her plot or major problems with her character. She wasn’t always like this, but I suppose this season is portraying her decent into a crisis and how she deals with that. She knows she has a half-brother and rather than confiding to her (now half) brother Alex, she confides to the boyfriend-back-in-her-life, Jack. But Jack is different, he’s swearing off sex for now, and he wants to build something real with Valerie. Valerie doesn’t like real, she likes flings and whims and only herself, so this creates immediate problems when Jack holds her hand in public. There is no sexual tension, there is nothing but a middle-aged couple browsing the LACMA. Nothing special about that. Valerie constantly imagines Jack grabbing her and having his way, but the reality couldn’t be more boring. Frustrated, she tells Jack she can’t do this, and leaves.

When Valerie goes home she finds Alex there, with information she wasn’t ready to hear. Alex has found her real father and half-brother. Her dad passed away, but her half-brother lives in Fresno. Alex is excited to go see him too and plotted out a course they can take – until Valerie drops the hammer. Instead of seeing Alex as feeling threatened by this other half-brother, Valerie selfishly yells at him that this is her thing and she will do with it how she pleases. Alex leaves in a stupor that will lead to dinner with Judy in the conference room. Valerie goes back up to her room and texts Jack about her half-brother in Fresno; he wants to come with and she’s happy to hear that.