Rob and Sharon are back in CATASTROPHE to let us eavesdrop into the hard, funny, and painful moments of their relationship. This season continues it’s unfiltered hilarious and deeply moving look at modern relationships and family dynamics. Will the wheels fall off of their marriage, or will these crazy kids figure things out? Catastrophe also features the final television appearance of Carrie Fisher before her sudden death.

Season two of Catastrophe ended on a bit of a cliffhanger. Rob and Sharon had split after Rob was wrongly accused of sexual harassment in the workplace, and in Sharon’s anger she may or may not have had a one-night stand right before they found their way back into each other’s arms. When Rob finds a receipt for the morning after pill he begins to put things together. If Sharon tells him the truth, will it drive them apart again? Rob has his own secret as well, since he’s fallen off of the wagon and has been it from Sharon. Can they admit the truth and come away from this stronger as a couple? 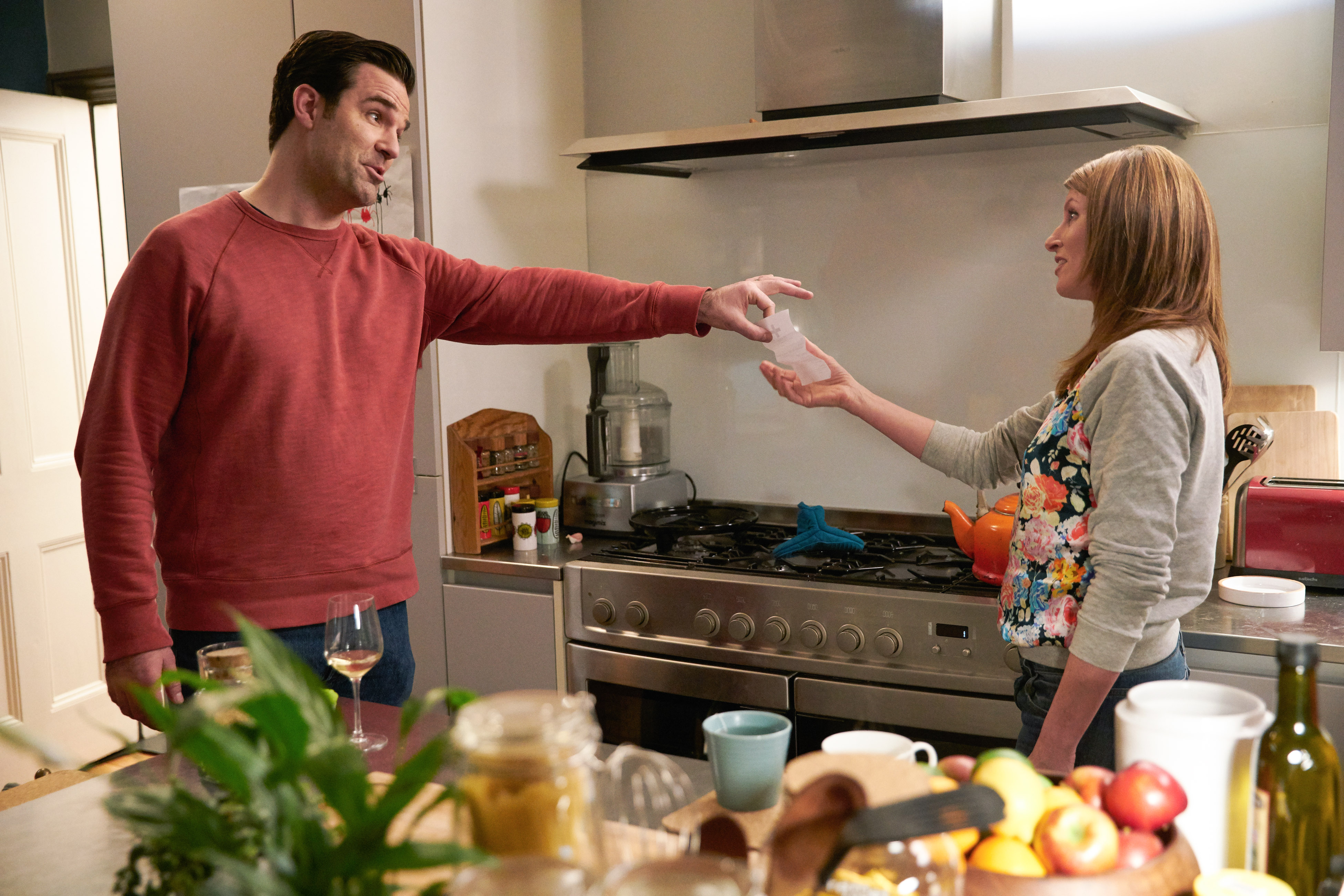 The greatest thing about Catastrophe is the chemistry between Sharon Horgan and Rob Delaney. They’re both magically course in their humor, and say the kinds of things most of us only think. Their unfiltered conversations are filled with honesty that might drive other less confidant couples apart. They’re mostly open books to each other, easily spouting off whatever pops into their heads, so it’s interesting to see them both try to keep something from each other this season. Neither of them are good at compartmentalizing, and both would be terrible poker players, because their tells are all out in the open for the other to pick up.

Sharon remains mum for a few episodes before she finally breaks down and awkwardly tells Rob the truth while a physician asks their son how he got a cut on his head that may require stitches. This scene alone is indicative of the thin margin between hilarity and devastation this show impressively balances between. Yes, they have kids, but their children are always in the background, never center stage, as these two tread life’s difficult waters attempting to stay afloat. Luckily Sharon didn’t actually have sex with the college kid. She meets up with him and finds out she just pulled out his penis, stared at it awhile, and fled the scene realizing she couldn’t go through with it. It still impacts their marriage, putting a wall between them, but soon Rob’s drinking may do the same. 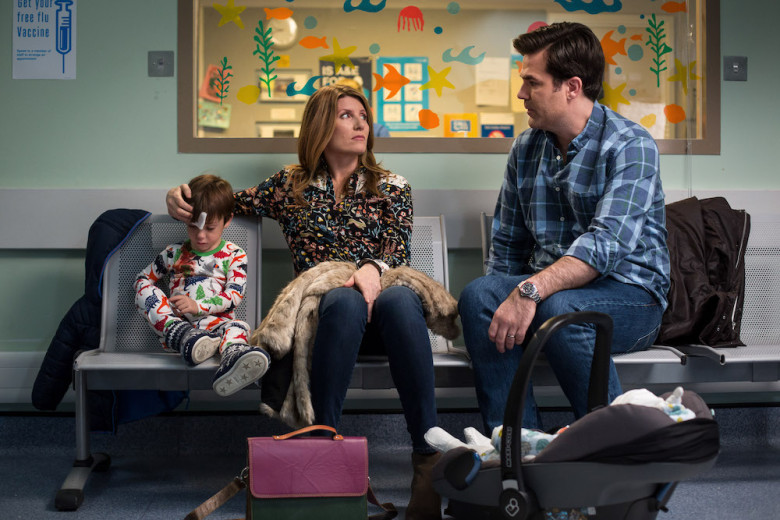 If, as according to Horgan and Delaney, the first season was the couple meeting, and the second was the honeymoon, this season is an unvarnished inspection of married life with all of its complications and obligations. Growing up sucks, and with the added burden of a family, there are all kinds of things people do for the sake of their spouse and children that they’d rather not. Rob’s attempt to find a new job instead of going back to the dubious pharmaceutical firm comes up empty and they nearly lose their house, even though Sharon reenters the workforce. When they’re unable to sell their home in order to downsize, Rob swallows the bitter pill of going back to work for a company he has moral quandaries about. The money saves the house, but the depression of it sinks Rob deeper into drinking.

Sharon and Rob also deal with the inevitable problem of getting older. When her breasts become increasingly sore during her period, Sharon goes to the doctor (played by Outlander’s Tobias Menzies) only to find her supply of eggs has nearly run out. This loss of youth weighs heavily on Sharon’s mind even though it doesn’t bother Rob at all. His struggles have been with a weight gain this season. Rob has become chubby due to depression eating from being out of work and in financial difficulties, and he’s also just not taking care of himself.

Their friends and families are just as problematic as themselves. Sharon’s brother Fergle still owes them a large amount of money from a loan Rob gave him and has fled his family in Spain rather than grow up and deal with adulthood, and Sharon’s father is drifting deeper into dementia. Chris scares off Fran’s new boyfriend out of jealousy, and they ask Sharon and Rob to be their son’s guardian in case of their deaths. It’s an honor neither of them is prepared for or really wants to accept, which doesn’t matter anyway, because once Chris finds out Rob has been drinking again, he changes his mind and rescinds the offer. Sharon’s father has a stroke, and while she’s off to Ireland to be by his side, Rob goes on a massive bender, and realizes he has to tell Sharon he needs help. He shows up in Ireland to tell her right as her father dies, so he has to bury his problem and focus on Sharon. 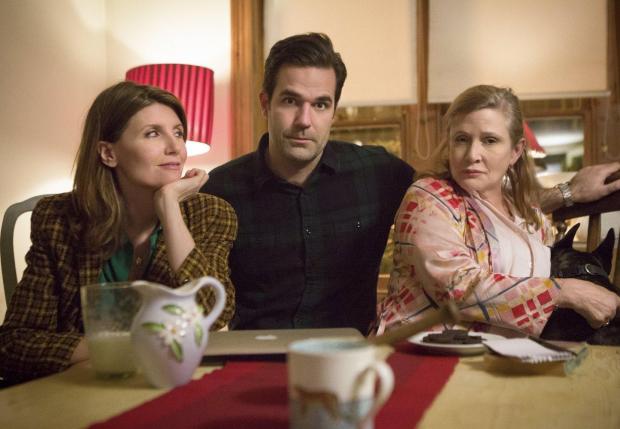 Rob’s mother Mia (Carrie Fisher in one of her last appearances before her untimely death) shows up for the funeral. She’s annoying, and inappropriate, but hits it off with Sharon’s mother and comforts her in her time of need. When Rob admits to Mia he’s been drinking again, it’s her tough love that pushes Rob to go back to AA, though he’s still trying to find the right time to tell Sharon. Carrie Fisher only shows up in the final episode of the season, but her influence on Rob is so important, and her comedic timing is so perfect for Catastrophe, it’s going to be hard to imagine the show without her.

Each season, Catastrophe ends on an emotional cliffhanger and this season is no different. After Sharon finally taps into her grief over losing her father, she drunkenly calls Rob to come get her from the pub. When she runs out of the car to get pizza while at a stop light, Rob quickly tries to find a parking spot but gets t-boned by another car. He sits bleeding from his head as Sharon runs to his rescue. Police are on their way, and he tells her he’s going to have to take a Breathalyzer test, and he’s going to fail. The admission comes out of necessity, and forces Rob’s hand. Catastrophe still has the ability to be incredibly moving and real, and because of the intense comedy in the show, almost gut punches you harder when it does. It’s another stand out season of Sharon Horgan and Rob Delaney’s Catastrophe. It’s a six episode season, which is almost too few, but the quality is top notch.