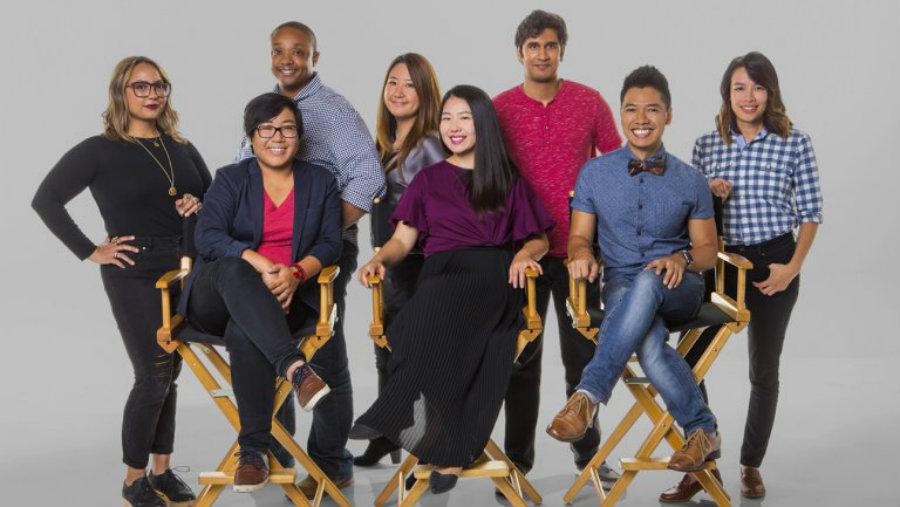 CBS has announced the eight writers selected to take part in their 2017-2018 Writers Mentoring Program as part of their CBS Entertainment Diversity and Inclusion initiative, now in its 14th year. The program provides mentorships, access and opportunity for writers with the eight participants selected from 1,300 applicants.

This year’s selected writers — in the above picture, starting from the back row, left to right — are Ashley Charbonnet, Jovan Robinson, Naomi Iwamoto, Munis Rashid and April Shih, then in the front row (also left to right) Krystal Banzon, Shuo Zhang and Gil Hizon.

The mentoring program lasts for eight months, pairing the selected writers with an executive mentor who helps them develop new material. After the mentorship period, the writers then take part in a 16-week workshop that teaches them about the television business and gives them access to agents, managers, executives, showrunners and producers.

Executive VP of entertainment diversity, inclusion and communications at CBS Entertainment Tiffany Smith-Anoa’i, said this about this year’s mentoring program:

“The access and opportunities that writers receive in this program are instrumental in creating game changers in this industry. In its 14th year, we now have alumnae running shows and coming to us to help staff up their rooms. This program strives to lay the foundation for writers to not only staff, but also develop their professional skills that prepare them to one day run their own show.” Here are short bios for each of the eight participants in this year’s program (in alphabetical order):

Krystal Banzon, drama writer
Krystal Banzon was raised in Fontana, Calif., by Filipino immigrant parents. She received a BA from Smith College in women’s studies, a master’s degree in new media from NYU Tisch and a Fulbright fellowship to study theater in the Philippines.

Ashley Charbonnet, drama writer:
Ashley Charbonnet is a screenwriter from the 9th ward of New Orleans whose family roots in the Crescent City date back to the early 1800s. She holds an MFA in film from Columbia University, and her work has received honors and inclusions in programs such as the Independent Filmmaker Project’s (IFP) Emerging Narrative Initiative and the SAG Indie Reading Series.
Gil Hizon, comedy writer:
Gil Hizon was born and raised in the Philippines and earned BA degrees in theater and psychology from Fairfield University and TV writing/producing from Columbia College Chicago. Gil’s romantic comedy feature, “Finding James,” was recently optioned.
Naomi Iwamoto, comedy writer:
Naomi Iwamoto grew up in Los Angeles and Tokyo. Naomi holds an MFA in production from the USC School of Cinematic Arts and a BA from UCLA in political science and Asian American studies. She recently completed the Ryan Murphy
Television Half Foundation’s directing mentorship program.
Munis Rashid, drama writer:
Munis Rashid grew up in Sugar Land, Texas and attended the University of Texas, Austin. He spent the summer of 2014 on a cross-country bicycle ride from Texas to Alaska to raise money for cancer research. Munis graduated from the American Film Institute with an MFA in screenwriting in 2016. He recently received the Grand Prize of the American Zoetrope Screenplay Contest and the Carol Mendelsohn College Drama Fellowship at the 2017 Humanitas Prize.
Jovan Robinson, drama writer:
Jovan was raised in Milwaukee, Wisc. He enlisted in the Marine Corps as a Korean linguist for military intelligence. After working alongside the NSA in a combat zone, Jovan went on to receive degrees in urban planning and film studies from UC Berkeley and a screenwriting MFA from USC’s School of Cinematic Arts.
April Shih, comedy writer:
Born and raised in the South Bay area of Los Angeles, April Shih studied film at NYU Tisch School of the Arts and produced several films and plays, including the Ovation Award-winning revival of “Kiss of the Spiderwoman: The Musical.” April spent two years playing poker in Las Vegas before pursuing a degree in playwriting. April was recently selected into the 2017 Sundance Episodic Story Lab, as well as the inaugural Film Independent Episodic Lab.
Shuo Zhang, drama writer:
Shuo Zhang was born in Beijing and grew up in the suburbs of Philadelphia. She earned a bachelor’s degree and a master’s degree from MIT. She has since worked as an actress and writer in New York and Los Angeles and is currently enrolled in the screenwriting MFA program at USC.
Share. Twitter Facebook Google+ Pinterest LinkedIn Tumblr Email