As such a fan of his work on Lost, I’ve been waiting for those signature “mind-f*ck” moments that Carlton Cuse had a hand in for 6 seasons. Last night’s episode of Colony gave us a couple cool moments like that. Were they “We have to go back, Kate!” moments? No. But they wet the pallet enough for me to believe the show can perhaps get close to that one day.

For starters, the cold open to the episode last night found Will’s old friend Carlos (who was taken by the Transitional Authority and sent to “the factory”) in an orange jumpsuit working on some other-worldly looking machines. He’s then shuffled in with other prisoners/slaves to a mess hall where they sit and eat in silence. One man begins to cough up blood into his mashed potatoes. “I’m not sick! I have something in my throat!” he exclaims while being dragged away, presumably to be killed. Later that night, in small bunks, Carlos stares out a window. His bunk-mate tells him staring won’t get him any closer. Then we see what he’s looking at: EARTH. I was waiting for the *boom* Lost logo to appear! It was a great set-up and pay off. I originally thought he was on some sort of mother ship, but it becomes clear later in the episode he’s actually more likely on the moon. How this all plays into the rest of the story remains to be seen.

Speaking of the rest of the story, things got very interesting in the Bowman home and within the resistance ranks this episode. We first find Will and Katie at home with their children, where Will informs them what we learned last episode: their brother Charlie is still alive and in the Santa Monica bloc. Katie is upset–Will should have consulted her before he had that talk with their kids. Now they’re confused and upset. Will comes back at her: “There shouldn’t be any secrets in our house.” OH HO HO! It is on!

This causes Katie to lament to her resistance friend (a woman I don’t recall seeing before this episode?) that she wants out. Broussard’s cover is blown, half the resistance is dead. It’s not worth it anymore for her to have to lie to her family and husband. Her friend tells her she’ll go to Quayle and tell him to leave Katie and her family alone, or she is out, too. Yeah, I bet you’re out, new fake character. I knew she was dead the second she agreed to help Katie. And what do you know, I was right! More on that in a bit.

Turns out, though, surprisingly, Quayle wants out, too. He phones up Will and asks to meet him somewhere in public. When he does, he informs Will he’s ready to give Broussard up, but wants to make a deal. He wants out of the bloc, with a stocked pick up truck. He’s out. And if Will doesn’t agree and takes him in? Quayle explains Katie will be the first name he mentioned to interrogators. Yuh-oh. 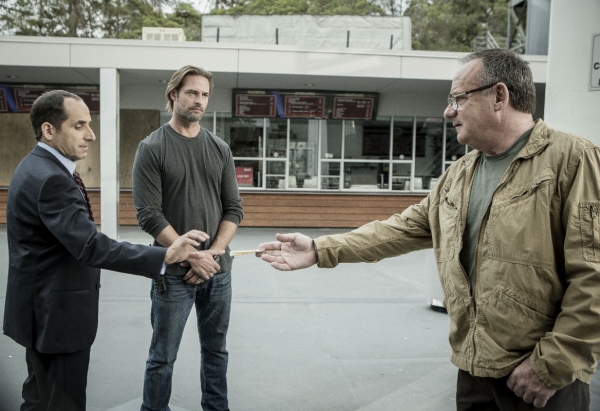 That’s when Will’s partner Carl Weathers floats the idea: what would Broussard do if he found out someone was trying to rat him out? Probably take out Quayle, right? And thus the plan is enacted. Will casually mentions to Katie at home that the head of the resistance cell came in and that he wants to give up Broussard. He feeds this info to Katie knowing that she will immediately go to Broussard to warn him. Almost as soon as Will finishes his sentence she’s exclaiming how she has to take the late shift at The Yonk (reallll smooth, Katie). And she’s off, trying to get ahold of Broussard.

Broussard seems the deepest remaining resistance member. He is actually branching out and making contact with other cells. One in particular talks about intel they have on a higher up (higher than Snyder even) coming into the Los Angeles bloc soon. This is the Chief Minister of the Pacific Coast we learned about earlier in the episode from Helena, who explains to Snyder he’ll be coming for the anniversary of the arrival to do a sort of performance review. She also puts a little fear in him, telling him that his policy of allowing people to more or less live freely is not the way most other Proxies are doing it. He tells her order doesn’t come from fear, but from decent quality of life. As she leaves she chillingly tells him that literally “no one else is doing it your way” and that when the Chief Minister gets there, he’ll have to explain himself. When Katie does eventually talk to Broussard, she tells him Quayle sold them out, but Broussard thinks Will might have just been manipulating her. When Broussard confronts Quayle, Quayle reiterates not to trust info that comes from Katie. He says that Will got to her and that they should cut off all contact. Broussard seemingly falls for it, and Quayle’s devious plan to escape the bloc is still in action.

But first, Will has to float the idea of letting Quayle go with Snyder. Snyder insists he’d like to meet Quayle in person. They meet at the Greek Theatre in Griffith Park. Quayle ups the ante–not only does he want an escort outside the block with a stocked truck, he wants a pass that allows him inside any other wall.

Chaos erupts at a Farmers Market, where the resistance and Transitional Authority clash. Of course Katie’s friend she was talking to earlier gets shot and killed here, and Will chases down Quayle. Quayle tells him “Deception is a natural talent. Your wife has it in spades.” And Will SHOOTS HIM. In the chest! Killing him! Then shoots some Red Hats who saw. Another great Carlton Cuse twist! Will tells Snyder that Quayle was dead when they got there, but he knows Will is lying.

Later, three men are hanged publicly, the word “Terrorist” written on each of them. Broussard tells Katie “This is why we fight.” And so the battle is still on, Quayle or no.

In a sideplot, Bram’s high school teacher shares his telescope with Bram. They see an odd patch on the moon (is this where Carlos is?) and decide they need to get a closer look. They want to sneak into UCLA to use their telescope.

The episode ends with Will and Katie back at home again. “Are we still fighting?” she asks. But is she talking about their argument over Will telling their kids about Charlie? Or about being on opposing sides in an alien occupiers versus human resistance battle? With two episodes left, we shall see.