It’s the season finale of CONTAINMENT, a season full of subplots, twists, and far more melodrama than anyone could have imagined. The biggest surprise though, is that it’s so tame, with more exposition than suspense.

At Atlanta Midtown Hospital, Cannerts attempts to do a blood transfusion between Thomas and Trey’s brother Cinco, who has been exposed to the virus. Jake orders Cannerts to shut down the treatment because it puts Thomas at risk. Ultimately the experiment fails, and Cinco dies, leaving Jake as the only thing standing between Cannerts and Trey’s violent revenge.

Inexplicably, on the finale of this arguably suspenseful show, Lex gets called into internal affairs for a meeting?! Looks like Lommers’ last move is to pin the latest cordon escapee on him, after all, he did try to break in on one occasion. This setup creates a ticking time bomb, albeit a little contrived, Lex must find a way to expose Lommers before she pins everything on him. 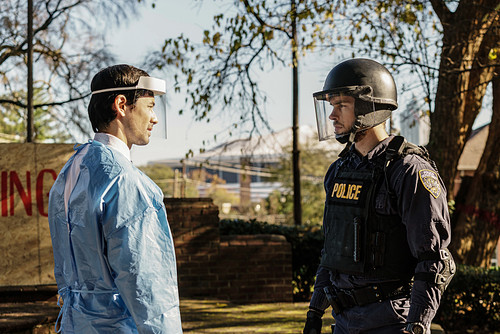 The finale must have been the point where the writers decided to make Lex the stand-in narrator for, well, everything. Many of his scenes are pure exposition, as is much of his dialogue:

“You’re trying to nail me with something I didn’t do. Are you placing me on a code 16 hold?”

“Dad, it’s Lommers trying to smear my name, trying to get us to make a false move, get emotional.”

(To Lommers) “You mean blow them up?”

Elsewhere, Jake makes a discovery while prepping Cinco for the morgue, one which is verified by Cannerts; Cinco didn’t die from the virus. The treatment cured the virus, but killed him in the process, so they may be close to a cure. Problem is, they need more blood, which means they need another asymptomatic carrier like Thomas. Jake decides that they need to do whatever it takes to find someone who matches Thomas’ blood type, even if it means testing everyone in the cordon.

Bert tries to treat Micheline’s injury. They’re still homebound. They have a drink and decide now is a good time to go. That’s pretty much it?

Meese leads Jana, Suzie, Quentin, Teresa and Xander through the sewers, not knowing that the National Guard is systematically collapsing them to prevent any more escapes. Unfortunately Teresa and Xander get trapped behind the rubble, forcing the others to leave them behind. The parting should have been more emotional, but honestly, it was short and sweet, mostly due to Jana’s emotionless goodbye.

Lex does some background and discovers that one of his officers is working with Meese, smuggling Atlantans out of the cordon for a fee. The escapee was one of their customers who unfortunately got sick on the way out. Lex asks Lommers to let him sweep the tunnels and stop Meese and his final group of escapees before the tunnels collapse. It’s an offer that Lommers can’t refuse, a chance to drop a tunnel on Lex for a perfectly justifiable reason. Using his list of deceased patients, Jake issues a plea for the residents of the cordon to get blood tested for a promising antibody and gets to say some pretty sweet lines: “The hope may lie in one of us, which means it lies in all of us.”

In the end, that’s largely what it boils down to – people. Trailers billed this show as a science fiction thriller, but overall it was really a character drama under heightened circumstances. The main characters’ individual climaxes are all about choices and personal victories: Lex confronts Jana in the tunnels and decides to go back into the cordon with her, Teresa and Xander reopen the convenience store. Leo posts the evidence against Lommers and feels less guilty about his dead blogger friends. Jake rallies the people of the cordon and finds someone who matches Thomas’ blood type.

The finale is unnecessarily open-ended, for at this point we know that it won’t be returning for a Season 2. It’s debatable whether or not the story was worth the journey, but at least we got some great literary quotes, occasionally inspiring credits music, and the beautiful faces of a CW cast to guide us along the way.