This week’s CONVICTION begins with the fallout from the revelation that Hayes’ drug bust was the catalyst that led to her installation as head of the Conviction Integrity Unit. The media reaction is pretty intense – there is a sea of reporters outside her building and the gossip rags have crowned her the biggest trainwreck of all presidential relatives. Way to go, Hayes!

As a result of her newest scandal, Hayes’ brother Jackson books her to do a damage control interview in five days. It’s definitely supposed to be one of those Diane Sawyer-style, in-depth personal breakdown pieces, where Hayes talks about how sorry she is and how much she’s changed. As you can probably guess, Hayes hates this idea, but she has to participate if she wants any hope of keeping her job.Once again, the question of Hayes’ character dominates this episode. And as viewers, we have to ask ourselves, how are we meant to be viewing Hayes? Are we supposed to feel sorry for what she’s going through? Feel sympathy for the many scrapes she seems to constantly get herself into? Glory in watching her poor decisions? I honestly don’t know. Yet again, Conviction seems hesitant to pick a side, and it’s the reason that the character of Hayes is so incredibly uneven.

To be honest, the show doesn’t seem to want to really lean in to the “Hayes as bad girl” trope. Conviction seems to want very much for her to be a rootable heroine who makes some mistakes, rather than an irredeemable anti-hero that we respect because she’s talented, but like because she’s bad. (And to be fair – she hasn’t actually done anything that terrible lately!) But the show also seems to desperately want to keep that “edgy” label, which is why we see Hayes making inappropriate sexual innuendos all the time, I assume. Buf if we’re supposed to be glorying in Hayes’ debauchery, they don’t make it nearly fun enough. It’s not a coincidence that the timeline of Hayes’ public interview and the investigation of their next case coincide. Hello, maximum tension! This week, the CIU is looking into the conviction of Penny Price. She’s the first female client they’ve taken on, and she’s currently serving 20 years for second-degree murder. Penny was convicted of poisoning her 12-year-old autistic son Owen, who regularly flew into rages and attacked her. She documented her struggles with him in a video blog series entitled “Mother’s Little Burden”. She doesn’t come off great in it, and the jury convicted her in under an hour.

Elsewhere, Hayes and her brother work on the game plan for her big television mea culpa interview. Jackson is really doing his best –he’s assembled some primetime appropriate outfits, complete with a set of pearls that belonged to their mother. Hayes is mulish about the whole thing, because she says it’s too much like her childhood when she was trotted around everywhere and told how to dress. (Again, I am left wondering just when President Morrison served and how old both the Morrison kids were in the White House. There’s a point at which they have to be expected to move past some of this, right?) Anyway, Jackson is insistent that Hayes has to stay on message – she needs to be appropriately contrite and regretful. She insists that she’s only sorry she got caught. (Just in case you forgot that Hayes is a a very edgy person!)

Meanwhile, the case of Penny Price drags along. We learn that Owen wasn’t killed by a sodium overdose as originally argued in court. He died of an insulin overdose, which proves he was indeed murdered. But by whom? His father’s alibi is found to be false, but Frankie and Tess eliminate him as a suspect during our weekly Crime Recreation Segment. This one involves them trying to determine whether Greg the dad could have snuck in past his home’s alarm system, poisoned his son and got out again during the two and a half minutes the family’s home health care aide was taking out the trash. Surprise, he could not. 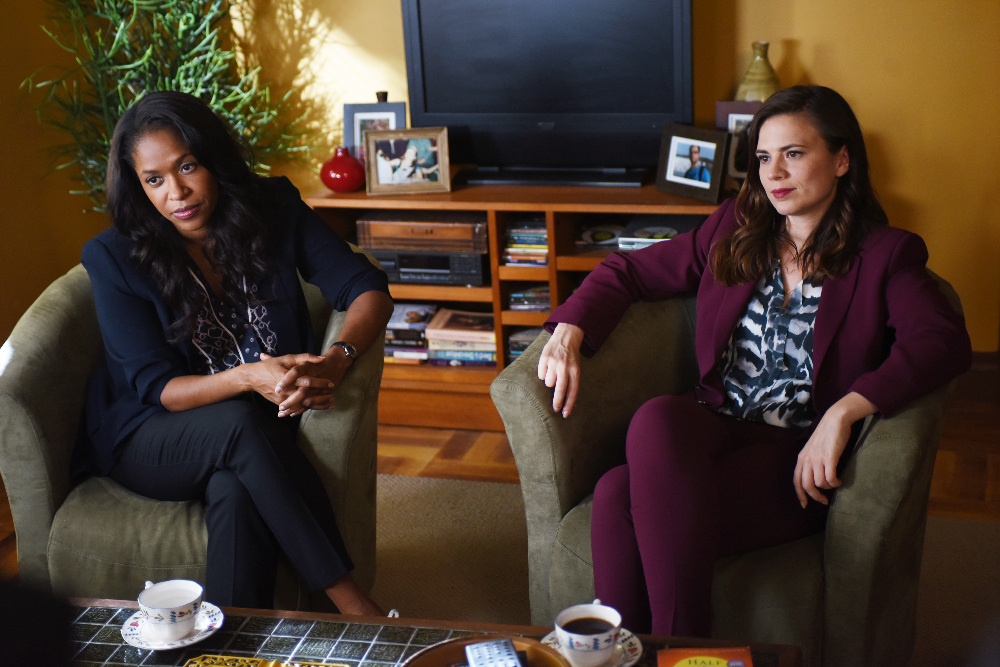 In all honesty, that particularly revelation shouldn’t surprise anyone. At its heart, Conviction is still a very predictable procedural show, and we all know that the first person that the investigators think really did it is almost never actually guilty of the crime. However, during all of this we meet Owen’s sister Emily, who goes on at some length about how much her family has suffered and how hard it is that her mom is in jail. She’s even planning to give up on college because her dad needs her and she can’t miss out on prison visitation time with Penny. This is about the moment where anyone who has ever watched television before figures out that Emily is the murderer. It’s not revealed until much later in the episode, after we basically investigate everyone else, but it feels very obvious from this first scene. (Is that better or worse than last week’s infuriating case of the week with the resolution that wanted to have it both ways? You tell me. I’m not sure.)

The CIU team discovers that Penny killed Owen by stealing an insulin kit from the diabetic sister of the family home health care aide Eduardo. Penny is stunned, but Emily admits to it, tearfully insisting she only did it to protect their family. But, there will be no resolution to this case after all – Penny declares that she’ll confess, claim she gave Owen the shot, and tell any judge who asks that she murdered her son. She says Emily “deserves a life” so she’ll stay in prison and take the fall for what her daughter did. Interestingly, we’re four episodes in to this series and so far, we’re basically four-for-four on innocent folks being in jail. I’m assuming at some point we’ll have a shocking case wherein the convicted person actually turns out to have committed the crime. I hope we get to it sooner rather than later, if only so we don’t assume that every single case involves an innocent person that Hayes and company must exonerate.

Next up: It’s time for Hayes’ big apology interview. It actually starts off pretty well. She remembers all her carefully crafted one-liners about accepting her mistakes and making the most of her second chance and using her legal background to help others. She becomes increasingly fidgety as the interview goes on, playing with the pearls around her neck. When she tugs them so hard they snap, well, that’s when Hayes snaps too. She abandons all of her predetermined messaging points and does a whole monologue on her how much privilege she has. She says she basically gets away with everything because she’s rich and famous, and has strings pulled for her when she makes mistakes. Her job, which she didn’t initially want, was one of those strings, but it turned out she’s good at it, so everything worked out. She admits that she’s a hot mess, but she’s a privileged hot mess, and the least she can do is lend some of it to others. Is Hayes actually sorry about anything she’s done?  It would appear not. But it doesn’t matter, because the public eats this interview up. #HayesKeepsItReal trends on Twitter, and she’s a national hero again. Unfortunately, while Hayes may have salvaged her public persona, it looks like her personal life has taken a hit. Scandals always need someone to pay, so instead of Hayes it’s Wallace who’s going to take the brunt of the heat for their deal about her coke. She gets to keep her job, but he’s going to be investigated by the Department of Justice for misconduct and corruption. Hayes is basically going to “skate again, like you have your entire life,” as Wallace puts it. Somehow I don’t think we’ll be revisiting their aborted make-out session from the last episode anytime soon. This is actually kind of a relief if you ask me. Even if I liked the concept of Wallace and Hayes (I don’t), it’s way too soon to even be thinking about putting those two together.

Hayes has bigger problems to deal with though – when she returns home, she finds out that Jackson has kicked her out. He’s packed up all her suitcases and left them with the doorman. As forced exits go, it’s a pretty darn dramatic one. The episode ends as Hayes walks away aimlessly, the apology plant she’d gotten for her brother in hand, with nowhere to go. She’s kept her job, and lost basically everything else. Which version of Hayes will emerge from these ashes? The hot mess party girl? Or the determined crusader? We’ll have to tune in in two weeks and see.