Tweetable Takeaway: Thanksgiving…eat (or sing) your heart out! Tweet

CRAZY EX-GIRLFRIEND took a different turn this week, a good turn I’d say. Was it full of crazy impulses and obsession, sure. But it also incorporated some family holiday wholesomeness.

Episodes tend to leave viewers with a bit of confusion as to how things end, both between characters and the storyline. I was under the impression Josh sat down and made things clear to Rebecca about where he stood. If I recall, he said he was VERY attracted to her, but loved Valencia. We’re on the same page right.

So why would Josh come from behind, put his arms around Rebecca pick her up and hug her? I’m sorry, I don’t know anyone that greets their friends like that. Weird.

Rebecca still hung up on Josh’s attraction to her doesn’t understand what his intentions are, though they seem pretty clear to everyone else. As much as you want Rebecca to wake up and smell the coffee, the only way we see her come to senses is when she’s down and self-deprecating herself, and that’s rather sad and pathetic.

You don’t want to see Rebecca sad because it kind of bums you out too-since she’s always to lively and bubbly. But, maybe it’s just what’s needed in order for her to really get it, considering she’s seeking advice from nearly everyone she comes into contact with, though still blinded and unable to acknowledge the truth. 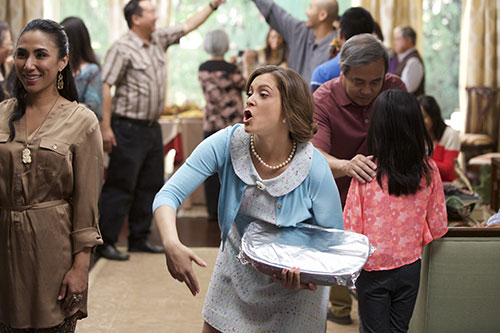 Meanwhile, Greg shares his “escape plan” and reason for wanting to leave the bar. This guy has dreams, Greg wants to move out and go to business school. He’s finally saved enough to do so and can’t wait for his shift to be over so he can tell his boss he quits. A dream we’ve all had at some point, or are currently imagining.

This week Josh’s ethnic background is confirmed, he’s Filipino….yet his last name is Chan? Hmmm…anyone else see a problem with that? I’m no historian, but have a pretty good understanding of the derivation of Asian last names and familiar with Filipino culture. I’m from So-Cal, one of the biggest melting pots, come on.

Home Base seems like it’d be one of my favorite spots to hang out at, they have a bar! And you get the dish on everyone from Chris, the coolest 5th grader who can sit at the bar. How else were we to know that the Chan’s don’t like Valencia and every year they almost break up.

Fantasizing about what Thanksgiving would be like with Josh and his family, Paula reassures her it will happen. If Paula’s involved, it’s going to happen. Much like Rebecca’s run ins with Josh and his whereabouts, Paula too has a few tricks up her sleeve. She plans a happenstance with Josh’s mother at an Asian market, convincing Rebecca if she can win his mom over and get invited to Thanksgiving dinner, she’s in.

Mrs. Chan was quite a treat this week, though the accent was a bit forced, a very stereotypical and rather accurate portrayal of a Filipino mother, hard to win over and critical, easily impressed with personal success. I’ve been there, trust me. 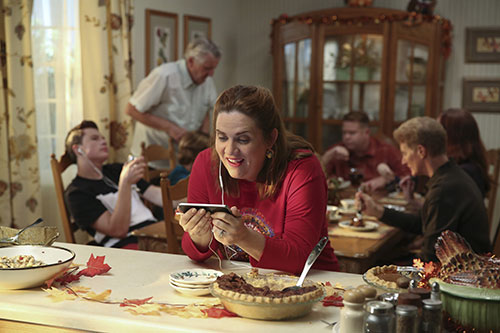 Per usual, a very desperate Rebecca who’s trying too hard to impress, cooks up a very traditional Filipino dish to take to the Chan’s. After all, she “Gives Good Parent”, meaning she knows how to brown nose and do what it takes to DTF, “dazzle the family” and make a good impression in case you were too distracted by the turkey bra and costumes; or if you didn’t understand a thugged out Rebecca who was spitting up mad lyricism, aka rap.

The holidays are traditionally known as being spend with family, society changes over the decades as do many ideals of spending time together. It was a bit disturbing that Paula was not fully there (though she’s really not) through Thanksgiving dinner, too busy on her phone watching and monitoring Rebecca’s every move as if it were a soap opera. A physical presence without a mental presence or involvement demonstrates with what is happening with families and relationships present day. Sad, but true. Unable to disconnect the actual electronics rather than ourselves. Whether it was meant to demonstrate just that or make light of it, it was smartly executed in the episode.

Having to deal with a family emergency, Greg has to postpone his plans to attend business school in an effort to take care of his dad. Aww. Putting things on hold means having to go back to the bar. Greg’s character development in this episode is superb, it incorporates a real life story with real conflicts and resolutions and shattered dreams, in a somewhat light hearted humorous way.

Greg only having been back at the bar for a few hours, already thinking and singing of when he’ll be able to leave the bar, again. “Hey West Covina” is Greg’s very heart felt Piano Man like ballad about his personal struggles. An easy, soft tune, not so obnoxious song was a great balance for the show’s songs, especially considering Greg has the voice of an angel and sounded like and sort of resembles Josh Groban. Another reason why Greg is the right guy for Rebecca. He gets love, he understands that it’s sometimes making a sacrifice for the ones we love. His relationship with his father is sweet and hits a soft spot.

Things couldn’t have gone better with Rebecca and the Chan’s, they forgot about Venezuela, I mean, Valderama, ugh… Valencia! She was forgotten up until Josh makes an announcement before his family and asks Valencia if she’ll move in with him. Eeek! Rebecca feeling all the foreign food manifest throughout her intestines is about to experience a Bridesmaids/Dumb and Dumber bathroom moment if she doesn’t leave and go home. 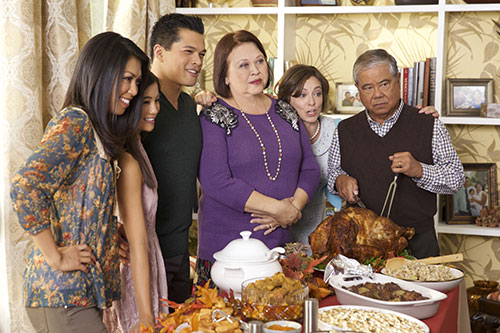 Recuperating and feeling miserable, Greg stops by Rebecca’s with tacos and tequila (how sweet!). Greg and Rebecca are themselves and comfortable with one another, it’s quite refreshing and rather normal. Nothing crazy about it. Laying in your PJ’s feeling like crap…and having to constantly run to take a crap is something only a good boyfriend would do, in its own cute couple-ish way. Greg is a keeper!

Sometimes love and relationships are about the little things, like pillow talk. Not your ordinary kind of pillow talk, I’m referring to Rebecca’s comment about no one liking a hot butt and gesture to place a pillow behind Greg’s, well-behind. Greg just sharing a similar moment with his father is smitten and recognizes he’s not over Rebecca. But you already knew that.

-What was up with the twins at the boba shop? Tweedledee and Tweedledum…

– Why wasn’t Greg invited to Josh’s parents for Thanksgiving? What is the meaning of their friendship?

-Anyone else think the theme songs resembles that of Family Guy? Only took me 6 weeks to realize.