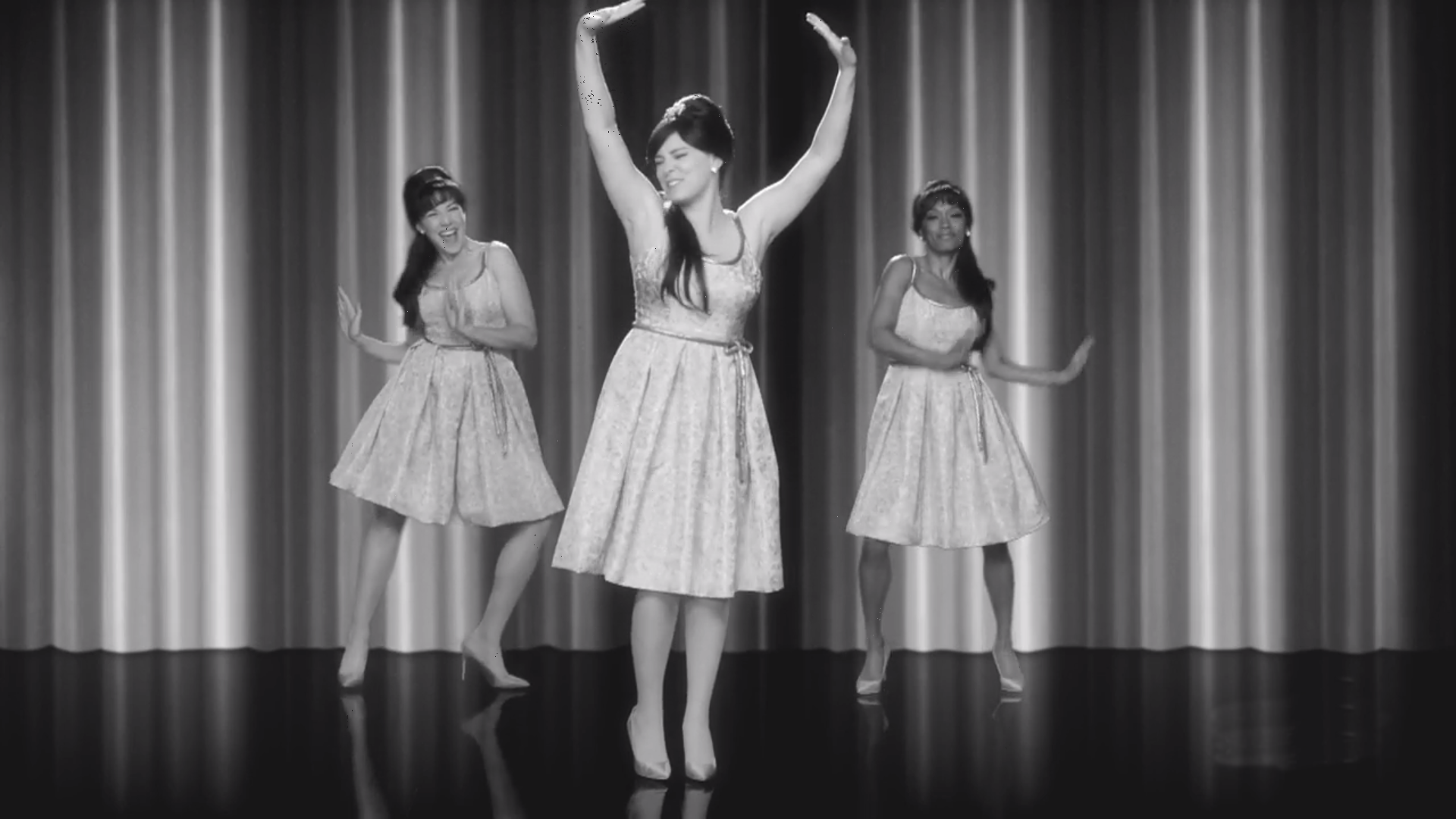 Crazy Ex-Girlfriend sees Rebecca’s depression and anxiety hit a deep low in “I Never Want to See Josh Again.” She gives up her independent life and goes back to her mother’s house trying to find a sense of comfort and stability but finds that, as ever, those feelings are denied her. Meanwhile, her friends have to find a way to cope without her in their lives and, rather than being well-adjusted adults, they end up terrifying a new lawyer at the firm with their overbearing friendliness.

I have to get more personal than usual here so that I can explain just how excellent this episode is. Sure, it’s not quite as humorous, stylistic, or musical as this series can get but the way that it handles narcissism, self-loathing, and suicidal ideation is realistic and compassionate. It’s neither fodder for drama nor a punchline but a serious desperate act. This episode makes me feel seen and acknowledged in ways that popular culture rarely achieves. 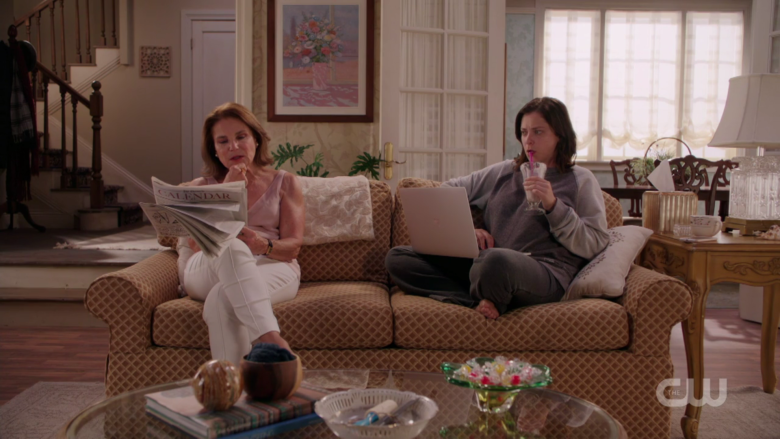 I always find it dangerous when this show brings Naomi Bunch into the picture. Her manipulative, narcissistic behavior is far too reminiscent of my own mother’s and my own escape is still much too recent and feels too tenuous. If a story features a narcissistic character and tries to absolve them of their harmful actions I probably wouldn’t be able to handle it at this point. On top of that, there’s a cultural Cult of Motherhood—a pervasive myth that mothers “love their children no matter what” which allows abusive people to get away with doing anything to their children and calling it love. Television and films tend to buy into that notion wholesale which, if you’ve ever experienced that kind of abuse, just makes you feel more shame and despair because it’s like the entire world verifying that clearly everything is your fault. Rebecca’s song about Naomi (“Maybe She Wasn’t Such a Heinous Bitch After All”) is only perfect because Naomi immediately undercuts Rebecca’s hopes that she has changed. It’s even great that Rebecca’s arch nemesis Audra Levine is the one who tells her to wake up and figure out what her mother is up to. Naomi is drugging Rebecca against her will and playing at being nice and loving so that she can get Rebecca to fall in line and commit her to a mental hospital. Let me tell you: controlling, manipulative narcissists never change. They force you to repress your feelings and acquiesce to all of their whims and desires and then, when you inevitably break down, they put it on you and tell you that you’re just not capable enough to live without them. Crazy Ex-Girlfriend often portrays terrible behavior but it always makes it incredibly clear that it’s never okay to treat people that way. This show deconstructs so many toxic default notions of society that when I watch it I feel like I can breathe easier. Frankly, Crazy Ex-Girlfriend makes me feel much less crazy. 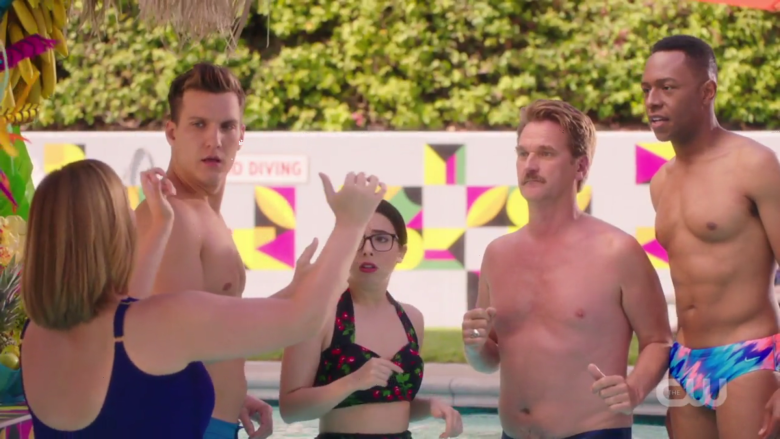 Rebecca’s suicidal ideation and her mother’s schemes are balanced by her West Covina law office falling to pieces without her. Naomi sends in Rebecca’s resignation so Nathaniel, in a fit of pique, immediately hires a new lawyer to take her place. The poor woman they bring in is bombarded by Maya, Darryl, and Jim who are trying to treat her the way that they treated Rebecca—Maya with her “weird millennial” girl power solidarity, Darryl with oversharing his personal life, and Jim by hitting on the new woman constantly. Meanwhile, Paula takes a vacation with her family to help her get over Rebecca’s departure. All of them end up at a resort in Palm Springs (a place associated with one of their clients) and a metaphorical trainwreck ensues. Poor Nathaniel held it together until the very end when Rebecca’s replacement was so professional that it just made him miss Rebecca even more. The four of them in a combined slow motion disaster both highlights their particular neuroticisms and provides much needed humor in contrast to Rebecca’s darker storyline. Even with the two separate threads it still connected well because it showed the hole that Rebecca leaves in the lives of her friends when she’s not there even while she believes they all absolutely hate her.

For a while I was wondering if there would be any songs at all, but when they finally happened they were well-integrated into the story and helped move the plot forward. I’m coming to realize that when the songs have a narrative function rather than just existing for the sake of having a song that’s when this show is at its best. Even though there were only two fairly short numbers here, one set Rebecca up for disappointment and the other came at the height of her replacement’s frustrations with the way everyone was treating her. They fit well tonally with the episode’s subject matter and were both funny and cute, if brief. 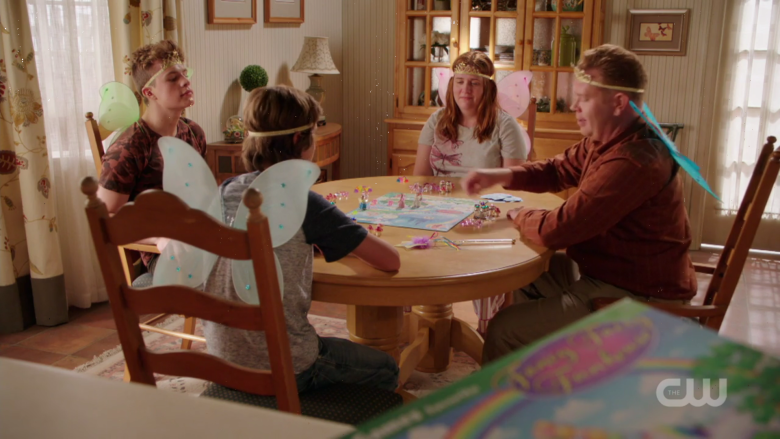 I’ve personally dealt with panic attacks and suicidal ideation since I was about five-years-old. There are incidents from that long ago that I very clearly remember. It took me decades to understand what I was experiencing and that those thoughts and feelings weren’t something that everyone just dealt with in silence. To me, that was just the way life was. It took being held captive by my parents for a year and a half, letting myself be harassed in a terribly toxic job, almost killing myself, and getting locked in a horror movie mental hospital for me to sit up and say “you know, I think this isn’t okay.” That’s when I, a lot like Rebecca, said “screw it,” left everything behind, and moved to California. I appreciate that this episode had a suicide hotline number appended to the end of it, but what I appreciate even more is that it doesn’t back away from hard topics and doesn’t use them for cheap drama either. If I’d seen a story like this years ago there’s a good possibility I might have woken up to the abuse I was experiencing and all of my attendant mental health problems a long time before I did. If the only frame of reference you have for life is completely screwed up, then fiction is one of the only ways that you can get some kind of outside perspective.

Television matters. Stories matter. Don’t ever let anyone try to convince you otherwise.