#TeamJosh! #TeamGreg! It seems as though the show is slowly transitioning from an adult comedy/musical to a Stephenie Meyer sequel to Twilight, week after week. (Yeah, I spelled her name right.) If you’re just starting to tune in to CRAZY EX-GIRLFRIEND, don’t be mistaken, it’s neither the above, nor a soap opera. It’s just twisted in the best possible way.

Rebecca and everyone else she crosses paths with is just really weird. But weird is normal, so that’s okay. After weeks of pining over Josh, Rebecca decides to change things up in her life, including her love life. A very moving and inspirational butter commercial confirms it is the right thing to do. If you haven’t yet figured out, Rebecca is “Going on a Date With Josh’s Friend!

Rebecca learns a very happy Josh is on vacation with Valencia. Feeling super bummed out she decides the best way to deal is to eat her feelings. She runs into Heather her emo punk neighbor (who has no significance to the show by the way) and advises Rebecca the best way to feel better about things and yourself is to find a hook up on Tinder! Woooo. Our world’s problems are a few swipes away from being resolved. World peace is on its way guys.

Rebecca ask Heather to come to the bar with her to meet her Tinder date because she’s nervous. Who cares about safety. Rebecca was such a brave little toaster she just cut to the chase and wasted no time. Grabbed the guy, kissed him and took him home. Giving zero flips “Sex With a Stranger” is quite an appropriate number for Rebecca. And all girls unafraid of casual one night stands. She does have a few valid concerns, “hey sexy stranger come back to my place and I hope you’re not a murderer”. Good to know Rebecca has some morals, morals are good. 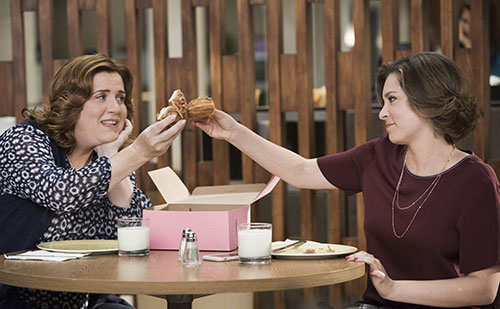 To think I actually supported Rebecca’s initial idea of eating junk food as being the best way to deal with heartbreak. In fact, it’s the most normal thing she does. She wallows like a typical girl, now if she were to only act like one. Nahhh. The show wouldn’t be what it is if she weren’t crazy, among other things.

Realizing her almost one night stand was an unhealthy decision, Rebecca decides to clean up her life and make healthy decisions moving forward. Like becoming a vegan, Buddhist, and giving Greg a chance.

Oh yeah, Josh is back from vacation, is broke and needs a job, but not at the bar. Because that’s so beneath him. Another reason and reminder as to why Josh sucks. 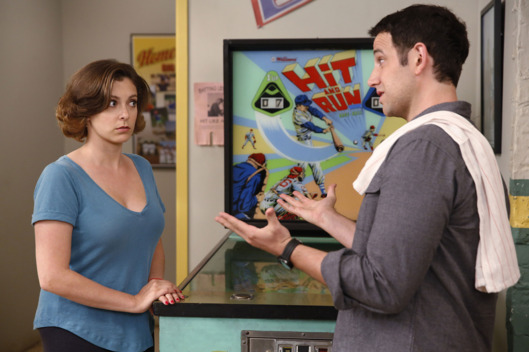 Greg is not quite so suave, but is the apple of our eye and apparently is also taking up girl advice from a 5th grader who he made a deal with and finally musters the courage to ask Rebecca out in a very unconvincing way. He explains he shouldn’t like her, and goes on rambling “when you like someone but you know they like someone else.” 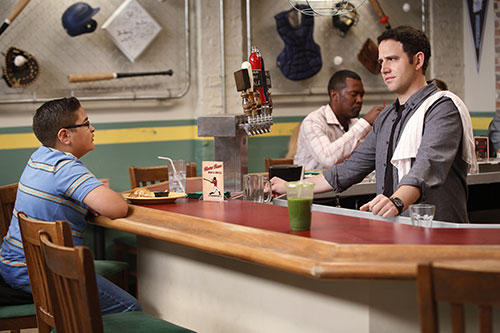 What is convincing is Greg’s helpless and hopeless romantic “Why Not Settle For Me?” Is this guy for real, can Greg get any better? He’s handsome and sings like an angel, not to mention a total gentleman. How can Rebecca be so blinded. I like where this is going, Greg accepts and likes Rebecca for who she is, not to mention, he gets her. He understands her quirkiness.

By the way, you really can’t miss the musical numbers, there are hidden truths in the lyrics. So pay attention, you’ll get a good laugh while you’re at it.

Oh yeah, that Josh guy. He still needs a job and asks for Rebecca’s help who practically fills out his job application. Yeah, that happened. If you’re asking yourself, are you that dumb Josh? I’ll go ahead and extend the courtesy and answer yes. He’s a total dud.

So about that date, it was full of Mariachi interpretive dancing, a guacamole contest and a Vegan friendly farmers market. Rebecca and Greg are enjoying one another’s company and seem to be having a great date. Yay! But the struggle within Rebecca gets the best of her and finds ways to sabotage the date. Boo!

Greg confronts Rebecca and calls her out on her crap, I respect that. And I think Rebecca did as well, she realizes she was able to work through a conflict in an adult healthy-like manner. Wow, what a concept.

Many times in life, you come to a self-realization and cave in to the truth. Because at the end of the day, if you really want something, you do it. Like pork tacos. Or bailing out on your awesome date and taking the weird vegan guy with the man bun home and sleeping with him!

If things couldn’t get worse, like a one night stand remorse, it’s Greg stopping by Rebecca’s place and seeing dude leave her place while she stands in a robe. Ouch.

Feeling like “you did something so awful you feel like it was a dream” Rebecca explains is what she’s feeling and has a bit of a meltdown and does another normal thing and cries. A meltdown is good, it’s a healthy cry. Since we’re about being healthy this week and all. Good cleanse.

Leave it to social media as a means to keep up with people’s lives. Rebecca calls after seeing Josh’s pathetic selfie and comes to the rescue. Josh sees a little bit of an emotional plea as Rebecca’s gets Josh his dream job…..at the Aloha Tech Center. Big dreamer Josh.

He goes on to say how happy he is that she moved here and that she’s so cool and sings her praises. Stop. Just stop. Don’t mess with her bro, this girl is trying to move on, you know this but you’re too self-absorbed you can’t let her go. Way to mind eff her. Yeah, we bet you’re so happy “Becks” lives here. As much as I didn’t really care for Josh’s storyline and interaction with Rebecca, I suppose it’s needed in order for the show to carry on this sort of love triangle. Couldn’t we think of a better situation for Josh’s character to have dialogue with Rebecca.

So about those random butter commercials Rebecca gets her life advice from…. Truly Happy, Truly Butter.

We can agree have been a little off. We’re taken to the butter headquarters and learn the writer left his wife for a prostitute. Hmmm, that explains it.

Irrelevant, random, but hey serves as a good laugh and we now know why the butter campaigns seemed a bit off.

I can’t help but wonder if the butter ads will later determine Rebecca’s later life decisions, she takes them a little too seriously. I mean, if they were fortune cookies that’d be totally different, since they are actually real you know?

What was up with all the Northridge jokes. Nothing’s wrong with Cal State Northridge. Sheesh. Well except maybe the squirrels, but that’s a diff story.

Side note: I can’t help but smirk whenever I hear any mention of West Covina after watching this show.