There are some  people that need craziness in their life to feel a bit of excitement. If CRAZY EX GIRLFRIEND on Monday nights was what you were missing, fear no more. Golden Globe winner, Rachel Bloom is back! Rebecca and the gang get in to some weird situations as they all plan a beach day which is no surprise anything less than unconventional. 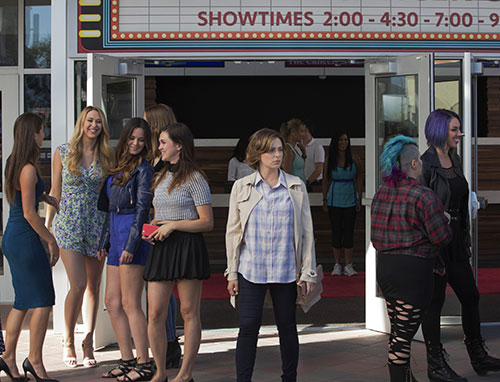 Rebecca walks out of theater after watching a rather depressing and heartfelt movie and sees Josh, Valencia, Greg, White Josh and Hector (he’s there, but not important) hanging in the courtyard of the mall. Feeling lonely and friendless, Rebecca gazes, is noticed staring and eventually invited to the group’s beach day. Swell, a pity invite, but hey, Rebecca has no shame, it’s time spent with people and most importantly Josh!

Real talk, if you’re desperately wanting to be part of a group and spend some solo time with your crush, you find or hope for a way to do so in a healthy, fun, welcoming environment. Pretending to go with the flow only creates frustration and resentment, obviously. But because this is totally normal and makes sense to us, it also makes perfect sense why Rebecca would do the opposite, push boundaries and weasel her way where she knows she’s not welcomed. 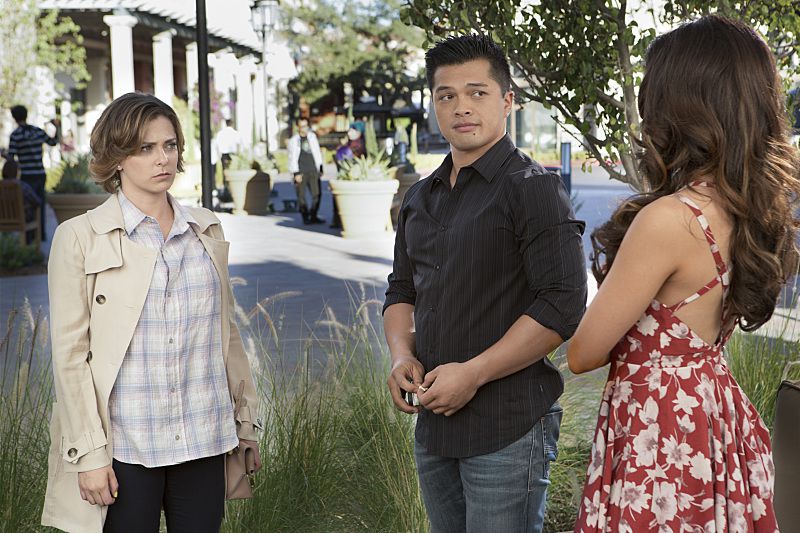 Depending on where you live in California, planning on going to the beach can be a bit of production if you factor in traffic and the obnoxious amount of gear you bring with you thinking you’ll use it. A beach trip somehow becomes a beach day, and at times quite a production. Rebecca feeling like a high school teen trying a bit too hard to be liked and fit in, takes up Darryl on his suggestion of renting a party bus to go to the beach. A. Party. Bus. What happened to old fashioned carpooling?

So you’re going to the beach in a party bus, cool right? Have a few beers,  talk and get to know one another all while avoiding the actual dreadfulness of driving in LA traffic, sounds great, except it’s not-at least for Rebecca.

Ladies, know someone like Valencia? Stay far away-there’s a reason why she has no girlfriends, or friends for that matter. I mean, if her random act of kindness of inviting Rebecca to join their beach day and her solo song, bashing on all the chicas didn’t clue you in, this snake has something up her sleeve. Women- love ’em, hate ’em, just don’t piss them off or show any signs of interest in their man.

“Women gotta stick together, each and every day….females helping females for the greater good…sisterhood, lend a helping hand,”

The thing is, what exactly will this helping hand over, a nice push or nudge over a cliff perhaps? Sink a head and drown one under the waves. Okay sure, it’s crazy, sounds a bit much, but let me remind you, crazy women have no limits. We’re talking Valencia here!

Valencia’s “sisterhood” song is fake, but super cute and how about those killer boots, seriously!

“Trust no bitch” is essentially what an overprotective Paula is advising Rebecca. Beware of the trap, for she is being set up. A bit unusual considering we’re used to her being her accomplice and at times an instigator. Is this a new, refined, mature mama bear Paula shedding light on her little cub?

Is it wrong that I want Rebecca to tag along with the crew to the beach, would love to see how she and Valencia battle one another. Did I mention this party bus has a dance pole? Yeah, they went there, at least Rebecca did, but that was almost expected. What

While Josh and Greg immaturely bicker about brews, tunes, and test who’s manliness is stronger and demands control, Rebecca tries to diffuse their egos by creating nonsense talk to distract them. Nothing unusual.

Rebecca desperately seeking a friend to talk to picks up Darryl who so happens to be on the side of the road due to his car breaking down.

Having your boss join in your party bus is probably not the best idea, but hey-sometimes doing the right thing and being a good person supersedes above all.

We’re afforded an opportunity to get to know a bit more about White Josh, who Darryl has a “man crush” over as he’s a trainer at his gym. And we also witness the most normal conversation between Rebecca and Greg, who awkwardly shares things in life are great; night school, and a cool girl (Heather). Right, didn’t see that one happening.

So about that dance pole, yeah, it was used. It was most definitely used. Rebecca decides she’s had enough and strips away her sad face, game on. Familiar with Rebecca’s stunts, I was expecting a dance off, that didn’t happen. I then was expecting a slip and fall, but that too didn’t happen. What did happen not surprised the gang, but me as well, and I’m sure a lot of other people. What, say you? Oh, it was Rebecca’s erotic dance number. Whoa! Can she move! Hot moves! Don’t be surprised if you notice pole dancing classes becoming another tipping point trend, again. A lot of guy’s fantasies came true last night if they tuned in at the right time and were expecting primetime and got a bit of showtime (who rejected the show, by the way). 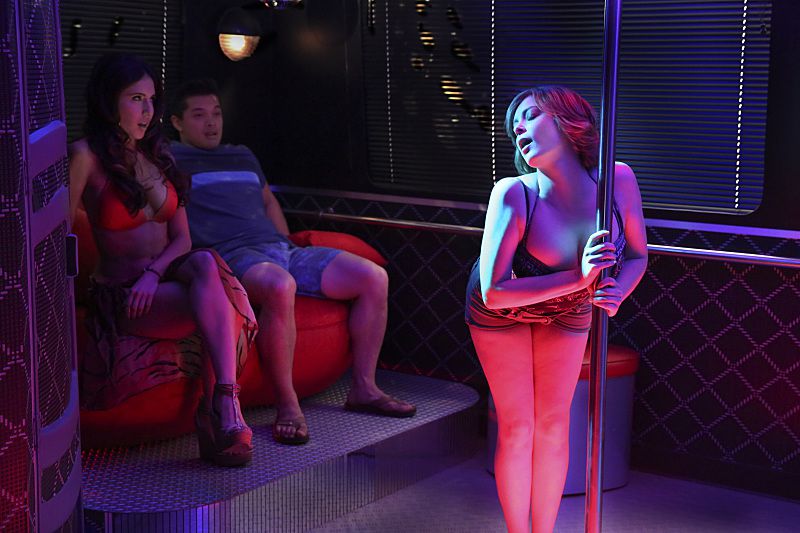 The performance didn’t sit well with a jealous Valencia of course, leading to opening a can of worms, but in a good way. All the built up tension eventually broke and true feelings came out, but the lies remain as no one admits fault or truth.

Rebecca is found out about her ‘real’ reason about why she came to West Covina, sort of. Truths started to come down and felt like a good mystery was finally beginning to unfold. Yay, finally!!

I’ve been against a romance between Rebecca and Josh, but I’ve come to understand that they tend to bring the best in one another, and most importantly understand and support each other. Rather than fighting it, I’m going to just sit back and see what comes of it. Really, I’m letting it go.

Rebecca finally admits, out loud, that she loves Josh. But why does she still show conflicted emotions of Greg moving on? The mystery love triangle continues…

Sidenote: What’s up with drinking bottled and boxed water out of a straw, come on now!