If you’re getting advice from your best friend who describes and compares her relationship to The Walking Dead and describes it as just trying to make it out alive, chances are he or she are probably not thriving in the romance department. This week’s episode of CRAZY EX GIRLFRIEND begins with Paula offering Rebecca advice and also comparing her nonexistent relationship with Josh to that of Twilight and adds it is the greatest love story since Romeo and Juliet.

If you’re just now starting to watch the show, this week’s intro to the show pretty much sums up the rest of the season, completely out there and at times making no complete sense, but ridiculously hilarious.

Paula, who has assumed the role of Love Doctor, has made it clear to Rebecca, that spending time with Greg is “not part of their plan.” She finds Greg a complete and total waste of time and that Rebecca needs to focus and rededicate her time toward Josh instead.

Really upset about Greg “obsessively” texting Rebecca six times, Rebecca explains they are just hanging out as friends who are simply going to a movie together. Paula mutters that he’s a bit of a stalker and that no one likes that type of behavior. Not to mention in the same breath, Paula and Rebecca are doing just that, stalking Josh and Valencia at their new apartment. A reluctant Rebecca wonders if it is appropriate for her to drop off a housewarming gift, a rice cooker which Paula argues is a horrible gift because it connects both of their cultures, rice. If you can’t appreciate the humor behind that joke, you might be a little too sensitive or live in a different time, rice is a huge staple food in most cultures. Very clever writing to sneak in culture a constant in the storyline.

Feeling slightly attacked and ambushed by Paula, Rebecca shares she just wants to be happy which seems to be genuine and contemplates whether or not to drop off the gift. Paula adds that she hates Valencia as much as all of the Kardashian’s combined, except for Caitlyn-who’s a national hero. Incorporating and intertwining relevant pop culture to your dialogue, bravo. Whether you agree or disagree, that snide remark both made people laugh and applaud.

Rebecca decides to call Josh, but her call is ignored. Ouch, that’s a big burn. She tries to deflect and defend Josh saying she gets it and that he’s busy and won’t even think about it. Oh right, like this incident isn’t going to manifest inside Rebecca’s mind. Sure, she won’t think about it at all.

Totally not thinking about it all, the best distraction is to work and get your mind off things, right? When the firm is relying on Rebecca to reel in the most important potential client, Calvin Young, she snaps and can’t handle the pressure, responsibility of making them West Covina’s premiere law firm, as well as the emotions by being ignored by Josh circling in her head. Finding the only way to cope is to consume a very un-Alice and Wonderand-like bottle of vodka with a post it reading, “Don’t drink me, Rebecca”. A Dr. Phil health video pops up and begins to ironically identify and determine the signs of a panic attack. Did I mention Rebecca’s drinking cup was her pen cup which had some exploded ink inside, making her teeth a very Avatar blue during her presentation with Calvin Young? White Feather confronts Rebecca and mentions Karen smelled Vodka, Rebecca says that’s weird because Vodka doesn’t smell. Does that line work when being pulled over too? He ends up sending her home to rest and prepare for the presentation on Monday.

At home, we see a similar scene we’ve seen before, a depressed, obsessed in thought over Josh and Valencia flashbacks, a disturbing downward spiral consumes Rebecca, again. I was honestly expecting her to make another trip to the grocery store for loads of junk food and to watch her wallow into another meltdown. 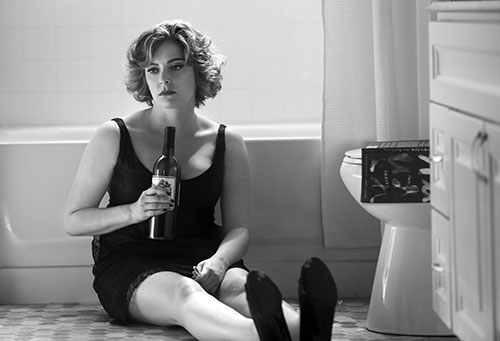 To distract her mind, she turns on the television, only to tune in to Dr. Phil and then drift off to an old school black and white “Sexy French Depression.” Sad, yet romantic, yes-sexy too, and self-deprecating. A rollercoaster of emotions and perfect reflection of the Rebecca’s constant ups and downs. My thoughts while picking apart the lyrics, does Rachel Bloom also speak French? Is there anything she’s not capable of? I’m thoroughly impressed by the versatility of the variety in music and cinematography throughout the musical numbers, it carries a great balance and shift from the actual show, it’s easy to absorb the musical numbers.

Conflicted about accepting the indirect medical advice from Dr. Phil who’s not really a doctor by the way, but still has a show offering advice, yeah-that still boggles my mind.

On the other side of town, Josh recruits his bros to help him assemble a dining room table he’d like to surprise Valencia with. So, how many duds– I mean, dudes does it take to build a dining table?

Don’t think IKEA for Dummies is on the shelves yet. The guys can’t seem to put the table together for a while and complain about how much they hate it, which is also meant to subliminally describe how they really feel about Valencia.

Unable to concentrate, Rebecca is on the hunt to get back on meds. After many Dr. Phil “encounters” she decides to finally see a real doctor who asks her about her childhood which she’s reluctant to discuss but desperate to find a way to get a prescription and go back to her old ways of self-medicating. The doctor tells her what we’ve been wanting someone to say to Rebecca all season, the truth. After being denied the pills, and more therapy, Rebecca excuses herself into her eerie black and white Donnie Darko bathroom only to find a pink little pill on the floor. Ugh, desperate means call for desperate measures I suppose.

Paula, stepping in for an absent Rebecca is hosting a dinner with White Feather for Calvin Young, which leads to him asking her on a date where they’ll hear smooth licks, meaning Jazz. Paula enamored by the attention and all the glitz and glam takes the stage and solos “His Status Is Preferred,” which is absolutely fantastic.

Paula is married and on Cloud 9, which poses a big red flag when Calvin expresses he’s not ready for the night to be over and flashes what at first appears to be a gold Magnum condom, whoa! Relax, it’s just his fancy room key that caught the wrong glimpse of lighting. As if there weren’t enough innuendos in this episode already, the sexual tension is insane and all over the episode.

A bit of a role reversal takes place when Rebecca comes to her senses and rescues Paula from making a mistake, identifying it as a Band-Aid to cover up the hurt just as she’s been doing with prescribed pills. How insightful. All is well, except for the fact that Rebecca’s neighbor continues to linger, an incredibly pointless character. If you’re in need of characters, bring back the grocery store clerk, he was actually funny.