Tweetable Takeaway: I hear what I want to hear…Tweet

CRAZY EX-GIRLFRIEND took a bit of a left turn this week. I find it difficult to pick up the show at random different spots every week. Sure, it’s spontaneous, but it’s also a bit confusing trying to remember where the show left off the previous week. The show opens with Rebecca walking through the park and meeting Josh for boba, what? When and how was this non-date planned. Rebecca has been completely consumed and engulfed herself around her obsession with Josh and has used others in the process to lean closer in hopes of achieving her ultimate goal of true bliss with a total jerk. Her character has shifted and I feel is a bit darker as she only cares or pays attention to matters or situations that directly affect her or will potentially get back to Josh and affect any chance she has with Josh.

While at the park, flipping through old pictures and reminiscing about camp and how Rebecca and Josh met, Greg (of course) shows up. But I’m glad he did. One thing I will say about Greg is that he’s honest and calls it like he sees it. So why is Greg friends with someone like Josh? I still haven’t figured that one out yet. Perhaps there will be an episode chronicling their bromance throughout the years, throw in a few dance/music numbers and you’re set. 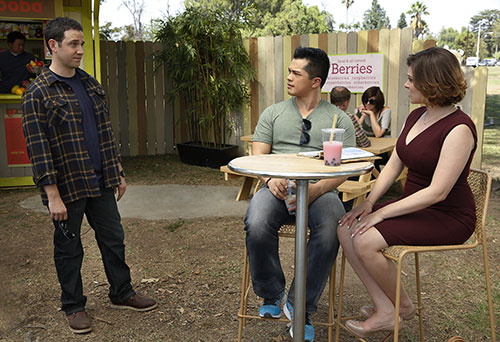 Rebecca feels a bit uneasy seeing Greg and explains to Josh their date wasn’t so great with out giving details. The three make eye contact, Greg not surprised to see Rebecca with Josh and approaches to say hi and give Rebecca a piece of his mind, and rightfully so. Being the classy guy he is, he doesn’t go into specifics about their date, like how Rebecca slept with someone immediately after their date after faking she was sick. He instead mentions that she is a terrible person, and Josh is too for meeting up with Rebecca knowing Valencia would not be okay with that. Greg notices the album and also calls them both out for lying about the whole camp thing and knowing one another and well, for just being terrible people. Josh tries to defend Rebecca still singing her praises about how wonderfully of a nice person she is, how helpful she is and all she has accomplished since moving to West Covina. He’s not doing anyone any favors by glorifying her crazy neurotic and unhealthy sanctions. Their both perfect for each other in the most unhealthy way possible, someone needs to pop their bubbles.

Feeling so hurt and offended but Greg’s words and truth, Rebecca stomps off and is determined to prove to Josh she is not a terrible person and will do good deeds to redeems herself. And we are now introduced to Rebecca’s new obsession for this weeks episode. She first gives a generous $20 to the homeless woman she insulted on her way to meet Josh by the way, proceeds to pick her up and give her a ride, shows up to the office with latte’s and donuts, pledges a grand to help a co-workers sick snake and finally offers to buy all of the candy bars for Whitefeather’s daughter’s team. Someone’s trying a bit too hard.

Paula, already having enough to deal with at the office, reassures Rebecca she is not a terrible person and being a good person is overrated. Still on her good person kick, Rebecca offers and makes a public announcement of representing White Feather as his divorce attorney, which would leave Paula in charge of the office. Not only is this a power trip, but revenge for Paula and her bullying and doubtful office mates.

Wanting to prove to Greg about her not being a terrible person, Rebecca takes White Feather to Greg’s bar to work on his custody case-again, to show herself as being a good person and seen as a hero. Because obvious loud announcements didn’t make things known. Greg reminds her that it’s not about her but about the case and it doesn’t change his thoughts on her.
Josh, also struggling by Greg’s comments handles things in a very weird and unordinary Catholic confession. He expresses he has conflicted feelings and that he is also attracted to Rebecca though still loves Valencia. Hmmm, I have a feeling Josh’s inner demons may arise at a later time which he’ll have to confront. We’ve yet to see Valencia in the last two episodes and I find it hard to believe that she’s an overbearing girlfriend whose presence lingers even though she’s MIA.
If there’s something new we’ve learned it’s that Rebecca is just as selfish as Josh. Extremely consumed about acceptance among other things, she can’t give anyone the respect of undivided attention. She is incredibly distracted by her own issues and agenda-no wonder she’s constantly digging herself from one problem to another. That’s off putting, you want to like Rebecca and I did. But she’s become a woman who wants to prove people wrong instead of the sweet, quirky and hopeful romantic we were rooting for. 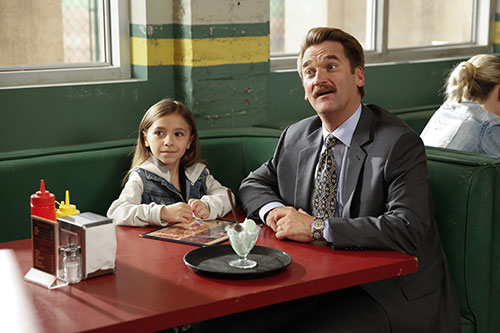 This episode didn’t do it for me. The past few weeks were on a great trajectory and saw great potential for a story following Rebecca and her love triangle between Josh and Greg, especially after a date gone awry. I get they’re trying to expand characters and their storylines, which I’m totally for- but you can’t just lightly brush upon last week’s date and simply have Greg call Rebecca and Josh liars and terrible people. Where’s the drama? Where are the emotions?
Again, I support the development of the characters and stories, which is why  it was refreshing to see White Feather have a bigger role in this episode and see a bit more of Paula. As far as Mrs. Hernandez, not sure what her role is in this show, watching her took me back to thinking I was watching an episode of Orange is the New Black. I couldn’t help but wonder if Mrs. Hernandez was also Norma. She’s not, but Mrs. Hernandez needs to talk and have a role, otherwise her exit can be as quiet as her entrance. Not a fan, not funny, and unnecessary. Speaking of look alikes, Stacey White Feather and Trisha Yearwood?
After realizing Rebecca sincerely cares about Greg’s forgiveness, she goes on to try and mend whatever can be salvaged. Though things aren’t what they were, no fault to Greg, it was nice to see things somewhat resolved now that they’re on speaking terms.

Josh coming to terms and looking within his conflicted emotions, sits down and has the “what are we talk” with Rebecca. He says he’s made his decision, admits he’s very attracted to her but loves Valencia. That sounds pretty clear. Of course, Rebecca having selective hearing only hears that Josh is attracted to her. Absolutely blinded and deaf apparently. This whole Rebecca/Josh thing is a broken record that needs to break already. What will it take for her to get it?