So just when we thought Rebecca was doing the predictable and still heading over to Hawaii despite Josh no longer going, we come to find she is actually en route to New York!

Last week’s episode ended with Rebecca running into her therapist, Dr. Akopian. And though they were both wanting to get away and not deal with any problems back home, this coincidence soon became a blessing in disguise.

Dr. Akopian tries to navigate through absurd stories and determine what ultimately brought Rebecca to West Covina. Starting to catch on to what the show is doing here, they’re bringing it back full circle, very clever…

Just as the impromptu session starts to get a little heavy and too serious, it gets wacky. No surprise, this much maturity and emotional depth had already exceeded it’s 30 second allowance. In case you didn’t know, Dr. Akopian has a side gig as a “Dream Ghost”, you know similar to that of Jennifer Hudson’s in Dream Girls? Dr. Akopian not only is a doctor which is a pretty admirable career, but also has the best teeth and nicest smile! AND, she performs alongside Ricki Lake (so random) and Amber Riley, best life ever. The only musical performance was cute, not over the top cheesy (aside from the costumes), and simple, which I liked. It didn’t try to hard and it delivered its message. That was that. It sounded like a mix between a mid 90s sitcom with a mash up take on “Dream Girls”.

Josh comes to Rebecca’s apartment because he wants to tell her something, hmmm. Good or bad, we never come to find out as Rebecca’s whereabouts are unknown and worry begins to creep in.

Starting at the root of the problem is usually known to be imperative in understanding many things. In this case, we learn that some of Rebecca’s early childhood memories aren’t as accurate as we thought they were. This whole time we imagine Naomi, (yeah, we’re on a first name basis) Rebecca’s mom, as a monster because we sided with Rebecca. But after realizing what an ass of her dad was, we see she truly is a loving mom (imagine that). Rebecca was just blinded, as were we. Funny how this episode tackles on truly discovering and understanding the root of the problem and uses early childhood memories and her parents parenting, rather than broken unsuccessful relationships. Rebecca’s situation is very real for a lot of people that use bad relationships as an excuse for their problems as opposed to digging deep and confronting repressed emotions. These are the problems we face as a society as a whole, too afraid to feel. 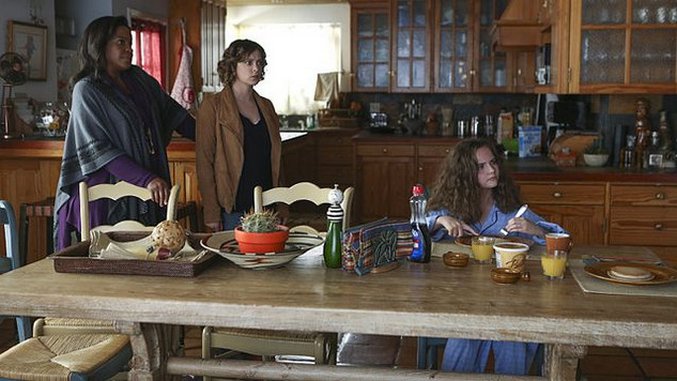 This episode also emphasizes a lot on “true love” and what it really means. Dr. Akopians adds, “love isn’t always a person, it’s a passion. Love comes in different forms.” Now, what I took from that was, “love what you do and do what you love”. Sounds simple, but it’s a lot easier said than done. And like Rebecca, many feel that they don’t have love in their life when in reality they do. They may just not recognize it because it is in a different form than what they’re hoping for or expecting.

Back home, an unlikely, very united group gather as they try to figure out and locate Rebecca’s whereabouts. Paula manages to log into Rebecca’s email and determines she’s moving back home to New York. Darryl is alarmed at her impulse move and also questions how Paula has access to Rebecca’s emails. Paula explains, “What, your friends don’t know all your passwords? Mmm, Not sure if call them friends Darryl.” Love you Paula, but will have to disagree with you there.

So as Rebecca is taken down memory lane and embarks on a soul searching quest, I have a feeling she will neither pick Josh or Greg and will have to learn to love herself  first. In order to find and feel love, she will need to first be single and happy before she dives into a romantic relationship. Don’t be surprised if Josh and Greg not only pine but fight over Rebecca, I can see this happening, there will be plenty for the writers to develop, just sayin’….

If you have to ask, “Are you in love with me?” it pretty much means, well, when you’re dumb as rocks I suppose. The obvious just flies over your radar Josh, doesn’t it? It’s not so much that he needs to ask to really know, but more so that Rebecca needs to express and get off her chest and just tell Josh already.

The season is nearing it’s finale, and this was an EXTREMELY well written episode, not as funny as others but it was different. It touched on real life situations many struggle with and takes on issues many tend to brush under the rug. We understand the roots, the beginnings and making of a Crazy Ex Girlfriend.

Sidenote: Don’t we all want a boss like Darryl?! He’s so cute and funny and such a sweetie. :)