Tweetable Takeaway: Rebecca wonders if she is this villain in her own story on this week’s #CrazyExGF
Tweet

How do you follow last week’s most anticipated CRAXY EX GIRLFRIEND moment – Rebecca and Josh kissing? It seemed like it would be a pretty hard task, and that it was. I wasn’t really sure what more would be revealed now that Josh had opened a can of worms and had initiated a kiss with Rebecca. Of course Rebecca was on Cloud 9. Meanwhile, Josh might as well have been in Darryl’s shoes questioning what a kiss really means.

This week’s episode was a bit anti-climatic and served the purpose of what seemed to be a “filler” episode as it lacked a bit of direction.

Sure, Josh is going through a bit of turmoil as he’s trying to decipher his feelings and processes kissing Rebecca and coming to terms he still has a girlfriend, but could possibly lose her because of his poor judgement. It would be too easy for Josh and Valencia to break up and create that open window for Josh and Rebecca to explore a potential relationship.

Torn by whether he should or shouldn’t tell Valencia what happened, Josh seeks spiritual help from Father Brah, who is stoned (who’s always struck me as questionable). Insert Catholic Priest joke here. After he rambles on about a rabbit, he gets pretty insightful and advises Josh with, “go to the one you have wronged, perhaps they will forgive you.” A maybe isn’t quite promising, but Josh doesn’t seem to be so bothered with the possibility of Valencia dumping him. That too is questionable.

Slowly falling from Cloud 9 and landing back to reality, Rebecca seeks advice from no other than mother hen, Paula, who compares her current situation with Josh as a two and half star rom-com. Which is ironically – accurately – appropriate, and deems Rebecca ‘Kate Hudson’. Did I mention Rebecca has been cancelling appointments with her shrink? Yep, she has, but hey, you might just have to cancel them altogether since you have Paula, the love guru. The only constant in this episode and show has been consistency in Rebecca’s character and her relationship with Paula as she’s always seeking advice and approval for her crazy impulsive antics. Crazy understands crazy.

Deciding it’s best to follow Josh to Hawaii (perhaps finally tell him you love him), Rebecca discovers all her credit cards have been declined. Initially, first thoughts running through my mind, Trent! Please bring him back, would’ve been a great way to incorporate him, but no. Turns out Rebecca is broke, perhaps all the tabs she’s picked up here and there have finally caught up. And who could forget her generous 10 thousand dollar donation to camp. Eek!

Usually, anytime Darryl sings and performs, an angel receives their wings, but doubtfully so this week. Whitefeather announces in an all staff meeting that he likes both girls and guys. As for “Gettin’ Bi,” the song was a bit of a flop for me. Yeah, double entendres are cool, we get it- but was expecting a lot more from this number.

In the limelight, Rebecca is a new hometown hero as word continues to spread for her work on the water scandal case. Despite the positive attention as well as being presented with a key to the city from the mayor, Rebecca is overcome and relapses with depression as she is now broke, comes to terms with the fact that Josh doesn’t love her, and identifies herself as the villain of her own story. She’s hit an all time low as she asks they mayor if there is a cash prize in exchange for the key to the city.

While one relationship glistens with hopes of launching and quickly falls flat, another finds its rhythm as Darryl and White Josh open up about their feelings toward one another. The development of this initially awkward relationship has become a key interest of the show and it’s continual progression. It’s refreshing to see a healthy, normal-esque romantic relationship define itself one episode at a time.

Hard to believe Rebecca is broke, and like most girls who drown their sorrows in sweets, Rebecca goes for the rugelach she believes her mom has sent. To her surprise, she’s shocked to see the coveted family heirloom she eagerly longed and wanted just a few months ago, the Garfinkle ring is back! Her emotions have impaired her judgement as it has lost its symbolism and significance it once had. With no hesitation, Rebecca’s sets off to pawn the ring and buys her ticket to Hawaii, absolute trainwreck. She overhears a phone call where Valencia expresses to her mom on her thoughts of Josh possibly popping the question. Oi vei!

This set up is too good to not be predictable, I forsee Rebecca being unable to either find or buy back the ring only to find out Josh has bought it for Valencia, come on, it’s a total set up that will end up biting Rebecca in the ass. 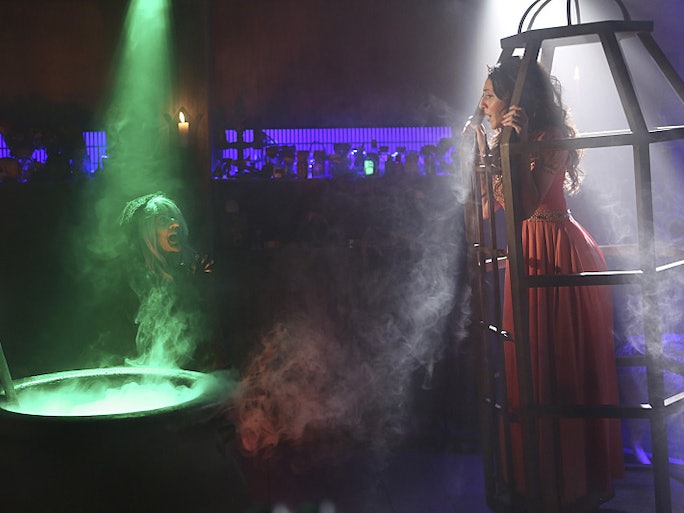 Perhaps Rebecca has brought on all this misfortune upon herself as she’s struggling and coming to terms with the fact that she is both the protaganist and quite possibly also the villain in her own story. I’d consider it more of her sabotaging herself and lacking common sense, though her heart is in the right place. She sings a very catchy, “I’m the villain in my own story,” which sounds a bit Disney. I mean Rebecca does say, “I told myself I was the Jasmine, but I realize now I’m Jafar.” This second number totally redeems the first song and balances out the musical performances for the episode hands down.

Still confused about Josh and Valencia making up and her letting Josh off the hook so easily? Yeah, surprised her Latina side didn’t come out. I was waiting for her lay into him and unravel her wrath on him and possibly ploy a revenge attack on Rebecca. Maybe Josh was expecting the same but is instead forgiven and his act of cheating is forgotten. While Valencia’s behavior was surprising and showed a bit of maturity, we quickly learn it was only temporary as the claws comes back and a controlling Valencia peaks through. Josh has an epiphany and quickly realizes he’s gone down the rabbit hole yet again and is right back feeling trapped. Looks like someone is having a bit of trouble deciphering their emotions and may possibly experience a change of heart, unless he’s trapped into a bigger commitment.

Rebecca’s trip to Hawaii must’ve not be been refundable as we see her sulk in her seat, but to her surprise and ours, Dr. Akopian is on the exact same flight and is assigned a seat right smack next to Rebecca. How convenient after all those sessions she bailed on, she’s long overdue for some therapy, and what better time than now. Doubtful we’ll come to learn what Dr. Akopian actually advises but can only imagine the sort of adventures she’ll encounter.

For your consideration and enjoyment:

-Enough with Heather, ugh! She serves no purpose as she’s also there as a filler. Please introduce a new character.