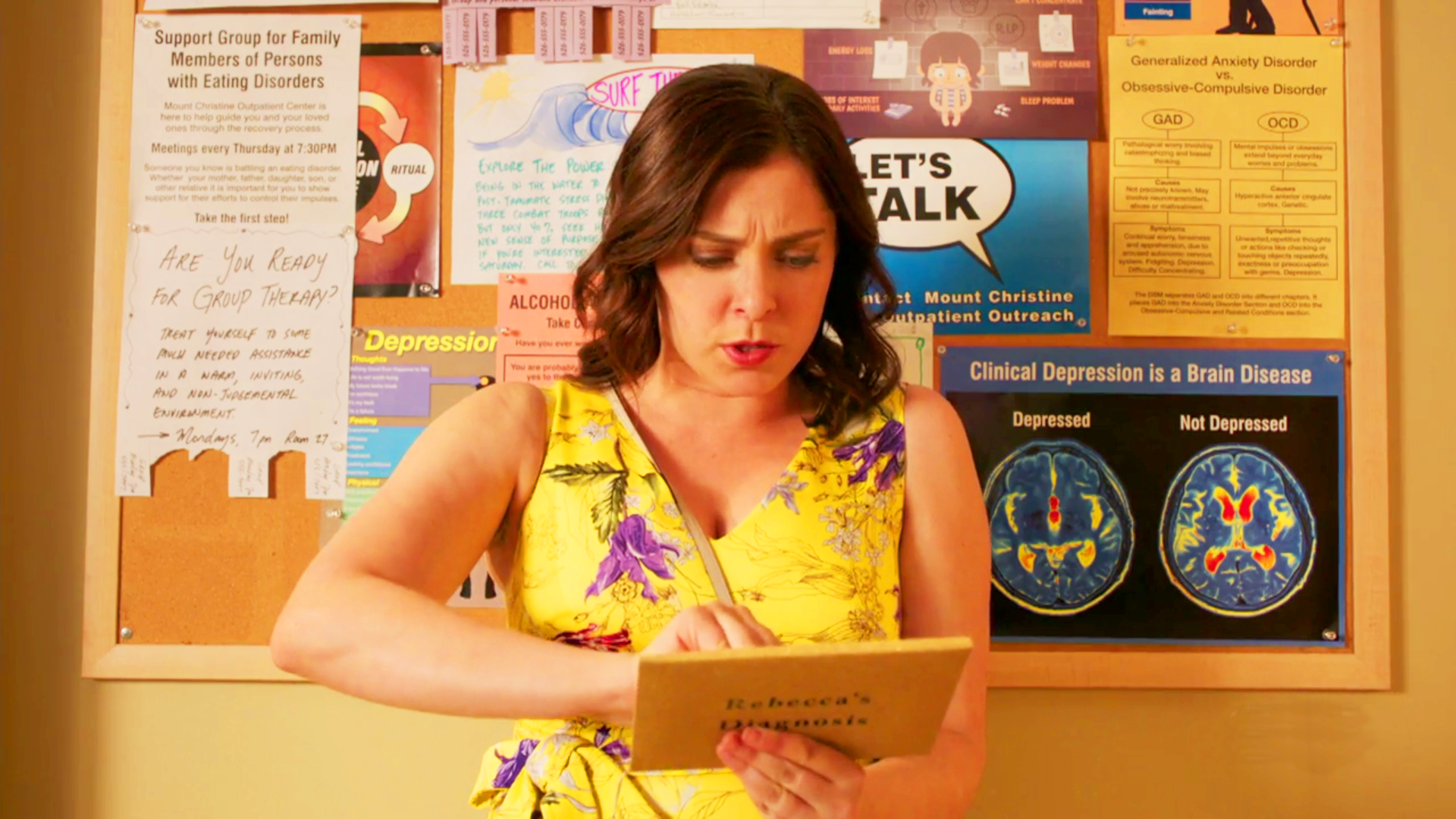 The more personal Crazy Ex-Girlfriend gets for me the harder I find it to review episodes, not because of any inherent quality issues with the episodes themselves but because it’s increasingly difficult for me to separate my critical brain from the part of me going “yup, yup, yup, that’s it.” This series is such an excellent and accurate representation of mental illness and mental health problems that they’ve now followed the path that I took to my own diagnoses and awakenings almost exactly which is comforting and disconcerting at the same time. I’m so affected by it that it is genuinely hard for me to evaluate the story on an objective level anymore. That said, subjectively, the show continues to be excellent on all fronts.

The bulk of this episode is Rebecca getting over her suicide attempt with a little help from her friends. Paula’s hovering codependency is a bit much and even Rebecca begins to notice it. Meanwhile, Valencia gets wrapped up in making viral videos about Rebecca’s suicide that promote herself. Heather, as ever, is the voice of reason while also quietly being in an adorable relationship with Hector. The adjacent piece of this episode is Nathaniel getting triggered into childhood flashbacks of finding his mother after she overdosed on sleeping pills. 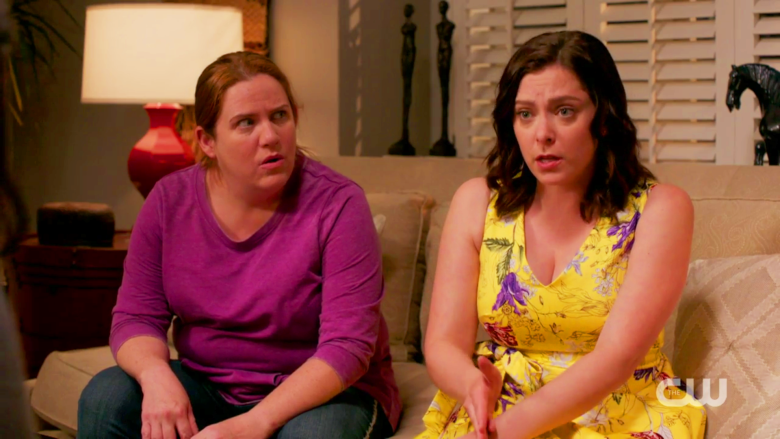 A nice touch was the emotional climax of the episode belonging to Valencia. Valencia spends most of her time wrapped up in demonstratively self-absorbed behavior. She’s not destructive but she’s selfish in a comical way. Eventually everything piles on so much that Valencia becomes outwardly upset and starts to cry because she’s afraid she might lose Rebecca. Rebecca then has a big moment of clarity where she accepts that she needs to work on her problems and can’t make grandiose absolute statements about anything right now. It’s touching both to see how much Valencia loves her and to see Rebecca dealing with her issues.

So here’s the thing with Borderline Personality Disorder: the reason it’s so difficult to treat, so stigmatized, etc. is because people with BPD very often won’t admit that there’s a problem, put the blame for the issues on others, and consequently refuse treatment. (I was BPD for most of my life, my father has BPD, and I still have a lot of the tendencies. I cackled when they gave Rebecca her diagnosis.) Rebecca does all the bad things for many years and in this episode she initially freaks out and tries to get a different diagnosis. However, by the end she’s accepted her BPD diagnosis and is actively working on her issues. That’s the crucial piece: you cannot get better until you recognize and accept that there is something that you need to change. It takes effort and time and it is hard, but it’s worth it and Rebecca is finally on that path. An inspirational love song to a diagnosis is a great way to show her mania and mood swings as well. Rebecca always wants there to be something that fixes her without her having to do anything. She’s learning now that that’s just not going to happen. Change takes effort.

All of this heavy plot business is balanced both by the usual humor and by a massive dose of sweetness from Nathaniel. Nathaniel started as such a jerk and he’s softening up so nicely. It’s not so much that Rebecca is changing him as he is realizing on his own what he wants in his life and what issues he needs to address. Rebecca is just helping to highlight the things he wants. In this case, he goes to visit his parents to insist they help him make sense of some of his traumatic memories. His dad is still awful and oppressive but his mother opens up and helps him understand the things that happened. It’s truly ironic that Rebecca always wanted some white knight to swoop in and save her from her problems and once she stops trying to force that role onto someone Nathaniel is quietly turning into the closest thing to prince charming that you can get. He’s gentle, understanding, and caring and Rebecca is his soft spot. I have a heart of stone and it makes me mushy. 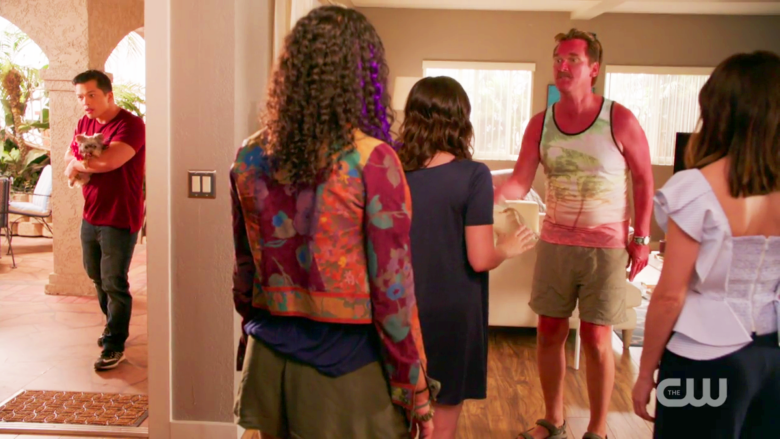 I think what I love most about this focus on actual pathological behavior is that the series is titled Crazy Ex-Girlfriend and the whole premise is basically taking the misogynistic stereotype of a “crazy” woman, giving empathy to that set of behaviors, and putting a logical, clinical, definition to it. It’s not that it’s pathologizing traditionally feminized behavior; rather, it’s both providing context for these types of actions and giving Rebecca a chance to acknowledge her own issues and work to change them. I’ve recently done enough research into personality disorders and psychiatric diagnoses to get a minor in Psychology and I find that now when people tell me stories about the “crazy” things people in their lives do I just want to say “I mean, it sounds like they have issues, soooo—….” It’s really nice to see a show that relies so much on pathological behavior for its humor and drama actually acknowledging that people shouldn’t act that way and that those who do behave that way need help.

I’m enamored with the way this series has always presented Rebecca’s bad behavior in a negative light, even while using it for humor. In addition, rather than Rebecca just being constantly terrible, this series is showing the steps that people can take to make positive change in their lives. Mental illness isn’t just drama fodder for this show—it’s something that real people really live with. There’s no blueprint whatsoever in fiction for how to go about moving forward in these situations, so it’s heartening that this show is going the therapy and hard work route towards getting Rebecca’s mental health problems resolved. I know from personal experience how often isolation and normalization of abuse go hand in hand with personality disorders and severe mental illness, so television (and fiction in general) is one of the only things a lot of people who need help will have access to to show them alternatives to their situation.

Objectively, this wasn’t the most stylistically perfect episode of Crazy Ex-Girlfriend ever, but subjectively it did such an excellent job at so many things that are important to me that I’m inclined to be lenient in my assessment. The songs were good to adequate, there was plenty of humor to balance the darkness, and the way it addressed mental health issues was ideal.