Rebecca is conflicted (shocker) about her religious beliefs and what holiday traditions to celebrate. Considering her mother is coming to visit, what holiday to observe should be the least of her worries. She takes down all of her Christmas decorations and replaces them with Hanukkah ones as she’s prepping her apartment for her arrival. So she’s a Jew who likes Christmas, big deal, what’s so wrong about being a Jew for Jesus?

Clearly, Rebecca and her mother have some issues that need to be addressed, so what better way than a home visit to clear the air, right? Rebecca’s mother has made quite a strong impression on her as well as the viewers; we know and can see why she’s the catalyst of her CRAZY EX-GIRLFRIEND antics. We finally meet her, in person that is and her entrance is nothing less than quite dramatic, demanding attention and displaying her high maintenance persona in an extremely critical song of an overbearing stereotypical Jewish mother. Too says she’s a handful is an understatement, wonder where Rebecca gets it from.

On the other side of West Covina, we learn Josh has to work a little extra over the holidays and be a real adult, life is tough. Paula and Calvin see each other for the first time since their ‘non-date’ and the night they almost slept together, a bit awkward and perhaps some weird sexual tension still lingering.

Updating her bff on what’s going down, Rebecca briefs Paula about her mom’s visit and asks her to not tell her or mention Josh Chan’s name because it’d give her the wrong idea of why she moved to California and a reason for her mother to judge her. Though we know it’s inevitable, and bound to happen regardless. Paula calls Rebecca a mommy pleaser and advises her to cut the crap and confront her; she doesn’t want to be a part of feeding into her ego.

Stopping by to show her mom around a very holiday spirited and decorated office, Rebecca notices her mom is less than impressed. While everyone is going about their business at the office, White Feather is having a hard time with the staff’s lack of Christmas spirit and is disappointed they’re not wearing their Christmas sweaters.

Mommy dear mumbles under her breath and calls all of Rebecca’s colleagues losers. Wanting to please so much like a teenage girl trying to get in with the popular group, Rebecca fabricates a lie about it not actually being her firm, but rather where she volunteers for underprivileged lawyers-if that really were a thing. Her firm is closed for Hanukkah and her bosses are in Israel, since it’s a Jewish firm and all. The things, the lies that come out of her mouth at any given notice are absolutely ridiculous. Though the show is scripted, I could only imagine how it would be if there were some improv involved, or is there?

As with anything involving Rebecca, one lie becomes many. Still on the mommy pleasing wagon, Rebecca lies to her mother about having to break up with someone because they wouldn’t convert, because that’s obviously a total deal break, as well as pleading with Paula to be pretend to be a British Jew, aka-someone her mother would like. If it sounds complicated, that’s because it is. How do liars keep up with their own lies and stories?

Someone having family problems, other than Rebecca is Greg. We know his mother and father separated, and that he’s been living with and taking care and supporting him since he’s been ill. What we didn’t know is that Greg’s mother re-married and has two half siblings. Love the idea that we were able to see a bit deeper into Greg’s character. Knowing more about him, like other people helps us better understand why they are the way they are.

Rebecca’s neighbor, Heather invites herself and accompanies Greg to his mother’s house. Not really sure what the significance of him bringing her to meet his family really is. Though at first he was reluctant, he changes his mind and expresses it would be refreshing to him for someone else to witness and experience the “craziness” of it all, his family that is.

Because most of us are Team Greg, it’s hard to imagine he’s less than normal. To our surprise, we learn he’s a bit cuckoo about his feelings toward his mother and his extended family. Greg has built resentment from his mother leaving him and his father after they split and had subconsciously made himself believe his mother was evil in order to detach from her. Even Heather sees the normalcy in his family and calls Greg out for acting like a douche (hard to imagine, I know). We learn his mother and step-father offer to support him should he decide to go back to school and quit bartending, which I hope happens.

What looks like a wonderful mother/daughter evening with a very traditional Hanukkah dinner (frozen latkes) and a gift exchange, is Rebecca’s fake it till you make it approach. As Mrs. Bunch excuses herself to the restroom-again, Rebecca takes a peek inside her purse and sees a much desired heirloom which has been passed down through generations. Stuck on the thought of the ring finally being passed, she continues to please her mom; the ring is close to being hers-Lord of the Rings much?

Despite ups and down, moms are great, they apparently can still call out for you like Josh’s mom. Still relying on his mommy because adult life is oh so difficult, he ditches work to stop by the holiday performance. The hip hop dance team’s captain can see Josh yearning to be young again as he whines about how dreadful ‘adult life’ is. He fakes an ankle injury and asks Josh to step in, making him feel like he’s still hip and young. He strokes his ego by letting him feel his legacy lives and is still the cool guy he was in high school. Being a Valley resident, the whole stereotypical Asian dance crew was dead on. We all know someone who was part of crew and invited us to their competitions. Some things never change. 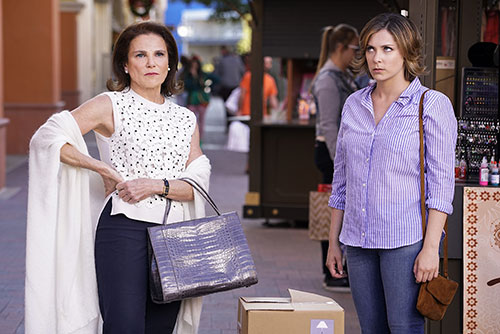 Fed up with having to keep up with the lies, Rebecca (finally) comes cleans and confronts her mom about all her built up emotions. Timing of it probably not the best as they’re argument is interrupted by Josh’s little dance number, who Mrs. Bunch recognizes. She realizes that is why Rebecca moved to West Covina and keeps digging into her. Words of anger, criticism and love are exchanged between the two. Mrs. Bunch tells Rebecca she loves her despite her thoughts indicating otherwise. I couldn’t imagine the thought of not being able to be your true self just to please others.

Though Rebecca and Greg both experience mommy issues, we see two completely different stories and resolutions which is very refreshing. Rarely do the issues get resolved in an episode, brushing them under the rug, only to be left dormant.

Heather, still a very insignificant and stale character in my opinion, shares a kiss with Greg. I don’t like it.

Sure, we know he’s not as normal as we thought he was, but still the sanest of the bunch. That doesn’t mean he’s the right guy for Heather, they’re totally incompatible.

The group Christmas number at the end, ehhhh, could’ve been better, lacked a little something, perhaps more creative considering all the other musical numbers had more energy and spunk. Perhaps my dislike has something to do with Heather ruining it for me.